Between art and news: Gianluig..

The most up-to-date genetic engineering technologies allow to intervene on the DNA of the human embryo to prevent malformations and diseases, while the 23andMe web platform: DNA Genetic Testing & Analysis, founded 13 years ago by the biologist Anne Wojcicki (whose name derives from the 23 pairs of chromosomes present in the cells of the human body where the genetic information of an individual is concentrated) sells a kit for the collection and remote analysis of DNA contained in the sputum to discover predispositions and risk factors for diseases such as Parkinson’s disease, Alzheimer’s and cancer. Initially the genetic manipulation of the human being was prevented by a worldwide ethical prohibition, but we know that in China the children of these sophisticated reworkings have already born, whose extent and case history is not yet precisely and officially quantifiable. Even the Food and Drug Administration (FDA), the US government agency that deals with regulating health products, which in the first instance had hindered 23andMe’s activity with sanctions, is in time aligned with a less rigorous protocol, granting the company permission to communicate to its customers the risk of developing ten diseases, as well as information of all kinds on their DNA, from the predisposition to suffer from baldness or obesity, to the reconstruction of their family tree.

These striking examples demonstrate that when a technology exists, it is impossible to control the outcomes and regulate the methods of its use. If it is obvious that scientific discoveries can improve the world, it is equally intuitive that we do not know where this change will take us: technology moves in a gray area, made indeterminate by laws that are always too slow to follow its developments, which is an easy land of conquest for military and macro-economic interests of which we can hardly imagine the existence. Collecting enormous amounts of data and using them on multiple fronts seems to be the primary objective of every multinational, which often to justify its work establishes an ambiguous dialectic between ethically correct façade procedures and underground foreclosure and capitalist motivations.

Pandora’s vase, once uncovered, can no longer be closed and today we find ourselves immersed in a complex reality, increasingly weighed down by invisible interferences of power that dematerialize weapons to appropriate bodies, our last bastion of independence and individuality. Reflects on these issues the work of Pauline Batista (Rio de Janeiro, 1988), which through a multi-faceted multimedia practice investigates the relationship between technology and the body, exploring the philosophical implications of the post-human in a fascinating osmosis between science fiction and information. At GALLLERIAPIÙ the exhibition Is Your System Optimized? hypothesizes a genetic-playful laboratory of the near future, conceived as an immersive environment in which the visitor is invited to experience the void through resistance devices that co-opt the design of scientific equipment to induce an ancient otium.

The blatant contrast between the functional aesthetics of the works on display and their practical uselessness leads us to reflect on how precarious the balance of contemporary society is, based on a system of perpetual increase in productivity that passes from the technological to the personal sphere. The strong cultural pressure that shapes contemporary lifestyles in the direction of an ever more efficient optimization of the physical and mental resources of the individual, in addition to foreshadowing disturbing rating scenarios for human beings, implies a dangerous idea of ​​the body as capital to be increased at any cost, whose extreme, but not too fictional, consequence could be a dangerous biological competition between beings genetically implemented to enslave the progress.

At the entrance of the exhibition the visitor finds himself in an alienating waiting room completely white, where he has already been preceded by the protagonist of the shot entitled Processing I (2019), which depicts a recurring female icon of Pauline Batista in the act of waiting unknown in solitude. The girl seems to have no weight and does not cast a shadow, like the bench on which her image rests. It is a fact that the creation / production of a super human being, an obsession common to different ideologies and literary genres, must have as necessary through the artificial and natural components the female body used as an incubator of life, a suggestion to which the sculptures of the Scraper series (2019) refer. Here a hybrid structure between the surgical tool and a stylized uterus (whose shape takes up that of a copper instrument used in Ayurvedic medicine to scrape the tongue) holds a ball made of colored and semitransparent polymer generated in the water, which like a living organism will shrink as dehydration progresses until it disappears.

After the antechamber, we arrive in the decompression room, in the middle of which Optimization station (2019) breathes, an inflatable transparent PVC sculpture whose shape recalls an enveloping sequence of soft ribs or a futuristic synthetic chrysalis. This blank body sketch acts as a sounding board for the overlying Pink Noise generator, a computer-generated frequency that is actually present in the downpour of rain, in the human body, in traffic and in industrial production. Millions of YouTube users set it as background noise to promote rest or concentration. In the installation the sound, intriguing common denominator between the living system and the artificial one, insinuates itself as a subliminal vibration in the body-sculpture and in that of those who approach it, materializing the impossible coincidence of maximum efficiency and total relax.

The shots from the Imprint series (2019) refer to the same organic connection between artificial and natural elements, which appear as hypothetical still frames of the numerous YouTube videos in which one can see hands mixing colorful gelatinous substances. Pauline Batista, indelibly fixing with photography the imprint of the skin of her hands in slime clots, connects these apparently harmless surrogates of a primary experience to the intricate link between digital databases and biological traces. The dividing line between technology, fiction and the body finally breaks up in Implantation (2019), a photographic print that concludes the exhibition, in which we see a pregnant female apparatus of adulterated oocytes whose curved surface reflects the artist’s study. The play of conceptual reflections and interchangeability between space-time elements and locations that structure the exhibition as an open narrative reaches its climax, suggesting that doubt is perhaps the only constructive strategy of resistance to exorcise the urgency of perfection and risk of the falsification of the self. 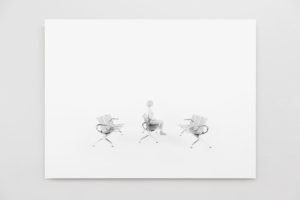 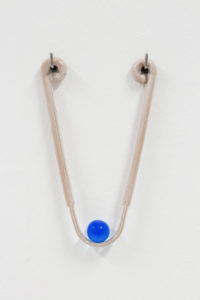 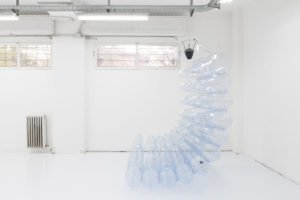 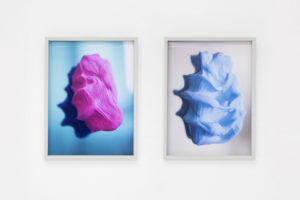 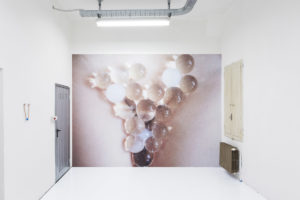