The person and the manifold co..

The Kabira Horse and other sto..

PerAspera Festival 2019: performative incursions into the human, too human

The 12th edition of PerAspera Festival, an annual exhibition that proposes and produces contemporary multimedia projects in Bologna and the surrounding area, is centered on the very current theme of the body, which new technologies have made expanded and ultra efficient, but also fragile and hypertrophic. Contended by the strong economic interests of corporations increasingly intrusive towards the intimacy of the person and burdened by political and ideological interference, the body is the tangible expression of human sensitivity, it is living matter subjected to incessant transformations of state that tries to resist to continue to be. The invited artists reflect on these themes through performances, interactive installations, land art, sound art and dance, languages ​​that are very different from each other but united by the desire to create immersive experiences that focus on the spectator, kindly forced to get out of his comfort zone to actively interact with himrself and others. Their incursions into spaces more or less assigned to contemporary art rediscover the essence of the locations that host them and tackle the various facets of a complex problem that spreads under the skin in a poetic and visionary way.

The environmental section of PerAspera inaugurated with the Intreccio installation by the Swedish artist Ida Bentinger, who focused on a newly built residential complex in Monte San Pietro. Piazza Case Bonazzi is an open wound in the heart of the town: the small village built around a mill a few steps from the local town hall has been razed to the ground due to the works left unfinished due to the bankruptcy of the contracted construction company and now looks like a ghostly conglomerate of concrete and weeds in which the ancient church protected by the landscape constraint is still imprisoned. The artist’s work, a weave of red threads with a strongly organic imprint made with the lace technique together with the women of the village involved in a ritual workshop, emphasizes and stitches this gash in the landscape materializing in an emblematic way the idea, often too abstract, of “social body”. The installation, taking women’s traditional work away from home, enhances the role of women in safeguarding the cohesion of a community and their artistic potential.

The Third Day installation by the British artist Simon Wilkinson is totally different, offering an immersive experience in virtual reality based on a story (completed thanks to suggestions and impressions of the public) in the spaces of Adiacenze, centered on the existential journey of a group of artificial intelligences to discover their newborn consciousness. Visitors, armed with cybernetic hands and VR headsets, had the opportunity to float in a dilated and uncertain universe in which music draws wonderful virtual beings in free movement. [To learn more click here] The same artist from September 13th to 15th will be present at the Serre dei Giardini Margherita with the BriGHTBLACK A Unique and Spectacular Moment project. produced in collaboration with writer and film director Myra Appannah. The performance, conceived for two viewers at a time on booking, starts as a video game and ends in the real world: two strangers will be assigned some rules, a walkie talkie and a mission to accomplish, which will surely reserve surprises for them.

In Variation # 1: S. Velato, the young Lorenzo De Simone, in the historic setting of Palazzo Rossi Poggi Marsili, staged an empathic dialogue with a spectator transformed in turn into a performer. Mediator of their interaction of looks and gestures, the photographic collage Who’s the Sinner? by Cecilia Gioria, initially hidden by a layer of clay and progressively discovered during the course of the action. De Simone’s gestural choreography, complex in alternating magnetic glances, tender fragility and imperious positions on his body, focuses on the relationship with the chosen spectator and tends to exclude the surrounding world (and the public).

In the participatory conversation Transformations of the human, transformations of power Daniele Donati (professor of the Department of Philosophy and Communication at the University of Bologna), Marco Mancuso (critic, curator and expert lecturer of new media) and Flavia Monceri (professor of political philosophy at Molise University) met with the public on the legal, political and creative values ​​of the transformations of the human body in relation to the most up-to-date dynamics of contemporaneity. From this informal brainstorming emerged the “ontological discomfort” of the body, hostage to contrasting instances in which the individual experiences the limits of his own free will, the growing distrust of an impersonal and conservative society and the instinctive fear of unpredictable developments an increasingly pervasive technology.

One of the most exciting moments of the festival was Darkness Session (expanded), a sound performance in the dark by Francesco Cigana with Marcello Batelli at Oratorio San Filippo Neri. Here the spectators, blindfolded and introduced individually into the main hall, long used as a cultural container by Fondazione del Monte, have embarked on a true shamanic experience in sound and indeterminacy, experiencing fears, loneliness and the invisible comfort born of awareness to have adventure companions hidden in the shadows. The musical score, which alternated percussion, metallic tinkling and digitally reworked noises, built a solid sound environment, alluding to an ancestral and ritual dimension, emphasized by the refined direction of penumbra that seemed to transform the eighteenth-century oratory into the whale’s biblical belly or in an impenetrable nocturnal forest. Uncertain about their location and position in space, unable to see the dancing musical entity that could be in every dark basin, at the same time near but also very far away, one felt welcomed, literally perceived the presence (of the self, of the others, of the music).

PerAspera Festival will end September 16 at Cassero LGBTI Center with the audio video performance Do humans dream of electric lions? by S.ee + Jody Ellen and with a DJ set by NEU Radio. 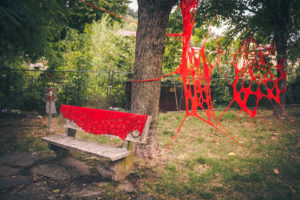 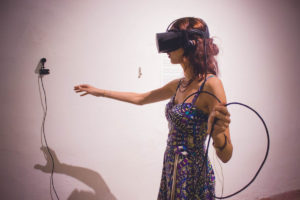 Simon Wilkinson aka CiRCA69, The Third Day, installation view at Adiacenze 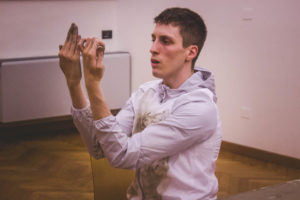 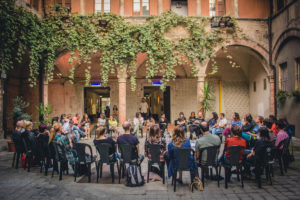 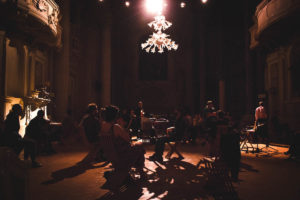 For all the images: ph. Grazia Perilli – Courtesy PerAspera Festival