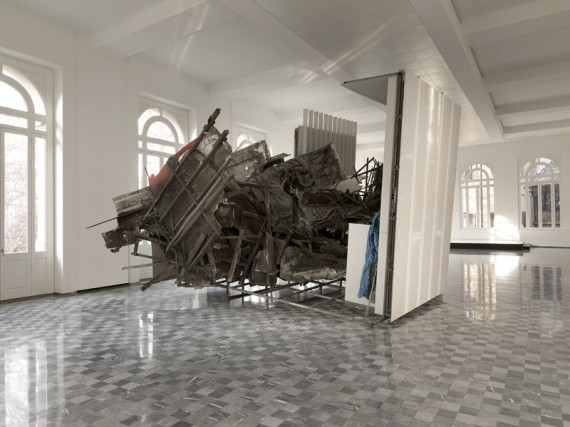 Among the most important European sculptors of his generation but still not adequately known in our country, Peter Buggenhout (Dendermonde, 1963) arrives in Bologna with The Blind Leading the Blind, his first Italian solo show promoted by Banca di Bologna and curated by Simone Menegoi.  After a debut linked to painting, for twenty years the Belgian artist has found his own expressive shape in elaborate assemblies in which different materials (industrial waste, rubble, metal sheets, iron pipes but also animal entrails, curdled blood and horsehair) make up seemingly Babylonian structures actually derived from an accurate calibration of each detail. These paradoxical systems, which are particularly suggestive when they are made in environmental scale, are ambiguous organisms between the wreck and the dockyard covered with a thick layer of dust that suggest their discovery after decades of neglect.The exhibition brings together two works from the series “The parable of the blind”, inspired by the Gospel admonition against the fallacy of human beliefs in the lapidary interpretation by Pieter Brueghel the Elder, who painted it as a dismal procession of blind people destined to end up in the ditch because conducted by a blind guide.

If the famous Flemish painter stigmatized human vices and weaknesses in teeming paintings by an entomological and unreasonable life that seemed regain its lost raison d’être in belonging to those crowded collective choreography, even the work of Buggenhout wants to reflect the complexity of existence and its elusive internal logic, in front of which man cannot be anything but an insignificant and partial witness. Therefore, despite his works arouse the temptation to recognize apocalyptic animals or macabre vessels adrift, the artist refuses and denies any symbolic and representative outcome for establishing an analogical relationship with reality considered in its entirety, as an inextricable tangle of possibilities and implications. Sculpture for him is a self-referential object that takes only after itself,  it is the result of a process that favors the flow of life without regimenting it, it is the majestic temporariness of shape given to eternity in its visible appearance. To these reasons it also can be attributed the choice not to emphasize the authorship of his creative act and to entrust the development of each structure to the unpredictable consequences of the situation initially prepared by him as if the compositional instinct that guides him in making the structure proliferate was a spontaneous work emanation of the artwork. Minimalist and abstract by vocation, he compensates the programmatic impersonality of his approach with an intensive organic fascination conveyed, in this case, from the dust: in the tiny particles that come from the ground and settle on the surface of the world, also intermingle corpuscular human waste, especially skin cells and hair, which contain the genetic traces of the transitional passage on Earth of anonymous and unrepeatable individualities.

Mysterious, attractive, repulsive, confusing and despite everything aesthetically refined, sculptures by Buggenhout dismantle the hierarchies of value and meaningful criteria by which we orient ourselves in everyday life to restore the wonder and bewilderment that originally caught man at the dawn of his consciousness. Overwhelmed by the magnificence of the set as Caspar David Friedrich in front of the ice sea, we cannot see any defined horizon beyond the installation and the look is irresistibly imprisoned in a maze of ravines, surfaces and deposits that excite our most voyeuristic empathy. In fact, these enigmatic sculptural complexes seem to acquire full clarity only when they are experienced with an introspective and meditative attitude, the only way that allows us to recognize in their rough and irregular forms the indefinable mixture of planning and chaos, growth and consumption that connects  individual existence to the cosmic breath. In a recent interview Buggenhout said that the destruction leads eventually to the construction, in the same way in which the dead leaves nourish the trees, suggesting how his works are not melancholic vanitas or catastrophic forecasts of the future as would suggest their apparent abandonment, but faithful material transpositions of world generative processes.

In compelling similarity with real life, the sculptures identify devious paths where the start is buried in oblivion and the end cannot be guessed, while the silent mental landscapes that wind along the path alternate desolate shores of loneliness and moments of enchanted beauty. 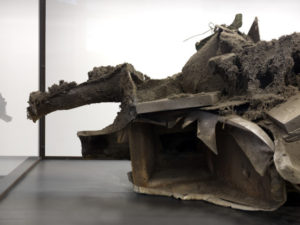 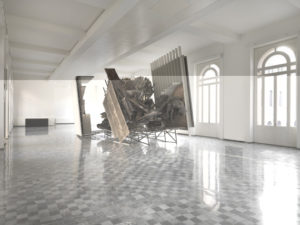 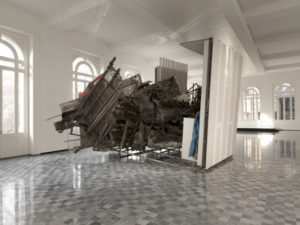 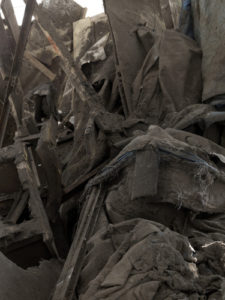