Piero Gilardi at MAXXI. The artwork as a social fo...

Piero Gilardi at MAXXI. The artwork as a social form 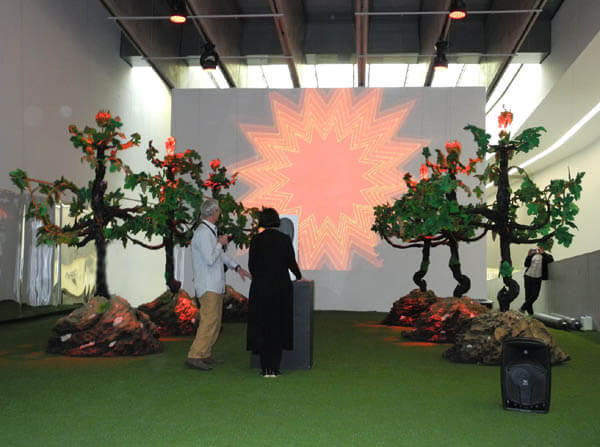 In the sixties and seventies, among the artists in Turin with a marked individuality, belonging or not to the Arte Povera, Piero Gilardi was certainly the oddest, both for the typology and for the social purposes of his works. It should be mentioned that he was used to act with the same rigor of the poveristi, but compared to them gave his production a socio-political connotation and even conceived the Media Art experimenting with new technologies as primary tools of creative expression, even in order to redefine their function and to achieve the interaction between art and human actions.
In the dynamic and evolutionary context of that period, the multicolored polyurethane rugs of nature that he produced since 1965, proposed hyperrealistic fragments of artificial nature that expressed the uncontaminated beauty of a new world. Initially, when there was no artistic and environmental culture yet to fully appreciate the underlying motives, they were perceived as unexpressed three-dimensional paintings, linked to Pop Art or Nouveau Realism, and not as works of new forms and concepts. In fact, those unusual artifacts, which stemmed from a critical awareness of reality desired by neocapitalism, tended to objectify the interpretation and democratization of art, departing from bourgeois interpretations and fetishistic appropriations.

From there Gilardi developed his ideology addressed to environmental protection, in full independence from the artistic system and oppressive powers. And, in deepening the contrast between modernity and nature, he implemented a radical pedagogical and practical strategy to propose to the community a more livable alternative habitat. For this path, with coherence and determination, he came to increasingly complex and engaging realizations: he organized street theater, where he featured caricatures of well-known characters of the industrial country’s and political scene, aestheticising popular protests; he held public debates that generated ideas and other initiatives aimed at mobilizing people peacefully in defense of the fundamental ecosystem and human rights. After the ’69 he went on with less objective works for the benefit of the more theoretical and critical ones, for an emancipation of the existential situation. He then founded the PAV Association (Parco Arte Vivente) with more extensive and penetrative participatory art projects through effective educational methods. An activism that emphasized – as Bartolomeo Pietromarchi said – “a constant ethical, social and political tension, an intellectual rigor, a civil and militant commitment where creativity is functional to a world view based on equality and empowerment “.

Gilardi defines a new statute of contemporary art other than the codified one, introduces a new aesthetic and proposes unusual operActions to concretely combine art and life. Thanks to his persevering constructive action, the MAXXI has devoted him the extensive retrospective Nature Forever – carefully curated by Hou Hanru (director of the Museum), Pietromarchi (director of MAXXI Arte) and critic Marco Scotini – with a series of works among the most significant, set up exemplary with the passionate complicity of the same author. The institution, therefore, had the merit of formalizing his counter – current art, capable of facilitating social change in a positive sense, and in a general crisis moment, however, has been able to better understand and share the unselfish and far-sighted action of Gilardi who in the past could seem utopian. Also, the elegant catalog (Quodlibet publisher) that revamps half a century of activity with various essays and illustrations, is a useful document of deepening the entire path of the artist.

At the preview, President Giovanna Melandri and the curators focused on the meaning of the exhibition. Gilardi pointed out that today we must think of alternative technologies to repair the failures of a century and a half of polluting industrialism and identify appropriate ways to manage an eco-sustainable production model. He then stated that, in his current art, “forms are a vehicle of social formations and our subjectivity must profit from differences in order to allow the realization of the dream of relational art, because only dialogue can lead us out from the epochal crisis in which we fell. It is no coincidence that we speak of anthropocene and of sixth extinction. “
At the end of the conference he invited a visitor to activate, with a simple breath, the electronic device that set in motion the extraordinary installation Inverosimile (an expanded polyurethane vineyard) and launched a large-screen projection of changing images that reproduced the cycle of the day (from dawn to night). The scene, made more impressive by the overlapping of bright colors and sounds, evoked tensions and war conflicts caused by man’s irrationality. The audience, immersed in the multi-sensory environment, became an active part of the harmonious performative process.

The next day, in a talk, Roberto Lambarelli (director of the magazine “Arte e Critica”) and the artist analyzed other aspects of the Gileardian repertoire. For my part I have addressed to Piero three clarifying questions:

Luciano Marucci: in your production, which results from a critical awareness of the reality in which we live, the linguistic form and the content blend in function of visual and mental interaction with the user?
Piero Gilardi: In my artistic work the relationship between content – ideal, poetic, cognitive – and the linguistic form is very free. With the end of avant-gardes and modernity, and especially since the 80’s of the last century, I believe that we have gained unlimited freedom in the use of language forms. For example, in my work of artist and political performer I use various sources: from the traditional satirical graphic of the socialist and communist workers to the Mexican muralism, to the graphic invention of the creative expressions on the web. In my recent installations such as Ipogea, Phosphor and Tiktaallik I have been using the shapes of my carpets-nature carved in polyurethane without worrying about their déjù-vu appearance.

After many years of participatory, radical and strategic art in the formal and theoretical sense, what meaning does the complex, articulated and intentional retrospective at the MAXXI – also compare to other exhibitions – assume for you? What did you want to highlight in particular?
For the MAXXI exhibition I originally thought of the title BIOPOLITICA. Thirty years of militant ecology. Then the curators wanted to extend this “red thread” over time and, all in all, it was a sensible choice. However, for me the most important aspect is that of my works on BioArte since 2000, and then from the construction of the Parco Arte Vivente, with works of ecological sense like Apiaria (2016), Tempesta Perfetta ( 2017) and political animations like O.G.M. Free (2014).

In this institution with a modern architectural structure, able to attract the general public, I suppose that the installation Inverosimile from 1989, which has found you suitable for setting, is your most representative work from a relational point of view.
Inverosimile, created in 1989, is the most complex and “compelling” technological-relational installation that I managed to process in the pioneering phase of digital art. In it there is a “summa” of previous experiences, from carpet-nature to political animations of the seventies and eighties, and also of my experience on the psychoanalytic psychodrama. However, I would like to point out that in the 1980s, with my collective, I produced creative events involving hundreds and sometimes a thousand people as in the 1986 the human chain for the denuclearization of the Le Vallette District in Turin. 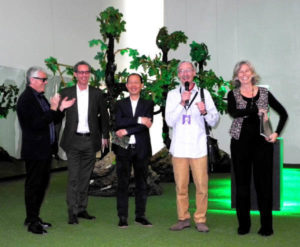 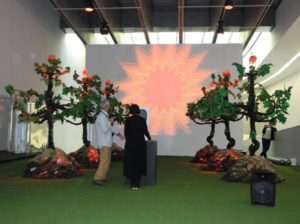 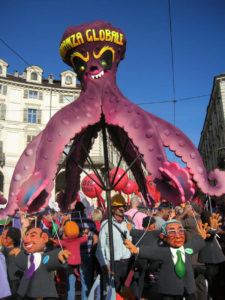 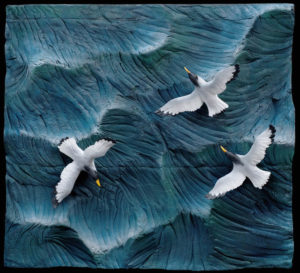