Piero Gilardi at MAXXI. The ar..

One of the most important traits of our time is the expansion of the intangible component in all aspects of practical , emotional and relational life: if on one hand the omnipresence of the network shortens times and cancels distances in an incorporeal presence of alternatives and possibilities, on the other hand the new media have normalized the liquid fugacity conveyed by software at the expense of tangible durability embodied by hardware. The nowadays society seems to aspire to a new kind of immortality arising from meticulous virtual storage of its actions, which in many cases comes to replace and outperform the direct use of the real. In this paradoxical dialectic between existential precariousness and perpetuation of the instant, the intensity pole coincides with an increasingly pervasive mental and sensory experience whose value is directly proportional to the generated involvement. Although since the Fifties major international artistic research of kinetic and environmental initiatives have anticipated these trends to dematerialization, yet today we are witnessing in the art system the inconsequent prevalence of tangible works that, even under the most current installation appearance, are the furthest reaches of the more traditional paintings and sculptures disciplines.

The analysis of the intangible component of contemporary art is the soul of EFFIMERA, annual exhibition curated by Fulvio Chimento and Luca Panaro at MATA in Modena, which explores the blurred artistic languages ​​such as sound, light and digital viewing with the intention to promote a systematic critical recognition in relation to their more and more stringent relationship with technology. The project, now in its second edition, compares the poetics of three artists of different generations who intend art as an immersive and totalizing experience focused on the centrality of the viewer in a unique here and now. The exhibition consists of three site-specific environmental installations that accompany the visitor on a fascinating journey from light to darkness in which different sensory perceptions suggest new mental and emotional spaces.

The exhibition opens with Acoustic Emergencies by Roberto Pugliese (Naples, 1982), a spectacular pergola of plexiglass tubes with different diameter and length that emit sounds synchronized and coordinated by an audio software. The electro-acoustic composition generated by this artificial intelligence comes from the sound mapping of the productive activities of Tenuta dello Scompiglio located in the hills of Vorno, an extensive agricultural and forested area with villa and farmhouses currently undergoing a major restoration project aimed to restore the dialogue between human presence and what remains of the original ecosystem. The sounds processed by the artist gather into one sound texture the production of wine, oil and honey, woodworking, biodynamic garden care and industriousness of the restaurant as if they were as many biological processes responsible, as a whole, for the survival of the entire system. Hybridizing cause and effect, natural and artificial suggestions, singularity and plurality, the artist transforms his departure paraphernalia made of speakers, circuits, computer, cables and sensors in a powerful organic analogy which proves how deeply a place is defined by the invisible interaction of elements otherwise undetectable.

The second room of the exhibition is immersed into shadows to enhance the floating digital frescoes by Sarah Ciracì (Grottaglie, 1972), a fascinating cosmogony of metamorphic images that blend science fiction, natural and spiritual suggestions and iconographic quotations from of masterpieces of art history. The video installation Like an Ocean with its Waves is a lysergic mandala where the meeting of sea waves taken from above via a drone generates an interference area that gives rise to the most diverse visions drawn from the phenomenal world. Each visual impression overlaps the subsequent merging with the memory of the previous one in an epiphany that materializes and exacerbates the effects of persistence of vision. If “the mind like the wind differentiates forms “, the space inhabited by the images it produces appears inexhaustible and infinitely saturated but not less real than the one we deal with our physical presence suggesting how the outside world is not an objective entity that exists apart from us but an appearance linked to an individual point of view. The scientific and encyclopedic interpretation of the Universe trespasses on a spiritual quest influenced by quantum physics and Eastern philosophy that dissolves into a sensual abandonment to the wonders of creation.

The exhibition ends with the setting staged by Carlo Bernardini (Viterbo, 1966), who transforms the space from container to opera: by canceling the lighting of the room, the dark becomes an almost tangible matter crossed by straight lines of the complementary substance-light that create freely passable geometric figures. The thin light beams that penetrate either the empty and the walls of the room are fiber optic cables on which the light pulses emitted by headlamps placed in their point of connection with the wall are conveyed as if they were vanishing points. The artist’s intention is in fact to amplify the two-dimensionality of design in three-dimensional experience that absorbs the viewer distorting the architectural coordinates of the exhibition space without prevaricate it. In this way Oltrelimite forces the fine line between illusion and objectivity, mental plain and surface, absence and matter, thought and emotion showing how even our most direct and immediate perception actually derive from a complex overlap of sensory stimuli, memories, logical deductions and unpredictable moods. 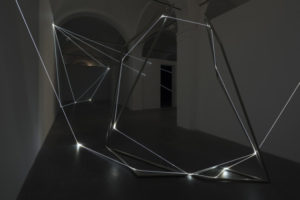 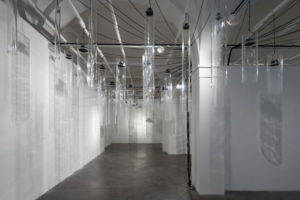 Sarah Ciracì, Like An Ocean With Its Waves, 2017, video installazione. Foto Roberto Marossi

Sarah Ciracì, Like An Ocean With Its Waves, 2017, video installazione. Foto Roberto Marossi