Piero Gilardi at MAXXI. The ar.. 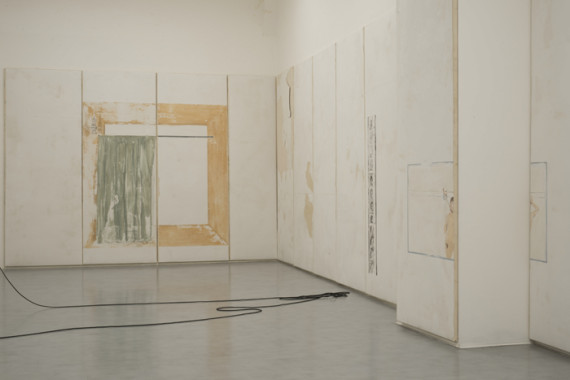 On 15 November 1974, De’ Foscherari gallery inaugurated the exhibition “Ghenos, Eros and Thanatos” where the curator Alberto Boatto, one of the most radical critics of art in that period, brought together 13 artists dedicated to eroticism intended as a driving force connecting the two extremes of birth and death. The works by Boetti, De Dominicis, Fioroni, Kounellis, Pisani, Cintoli, Mauri, Mattiacci, Pozzati, Burri, Patella, Zorio and Fabro exhibited on that occasion make a journey of extreme situations in which each stage is configured as an initiatory test for the attainment of the meaning that lurks into insignificance gratuity of chance. In the book-map that accompanied the exhibition the ordinary and inescapable circumstances of existence rejoin their ancient mythological and archetypal matrix while maintaining the marks of a painful and visceral incarnation in which the human being is the sacrificial victim of an imperturbable destiny-executioner which leads his singularity to the universal clot in which death is the food of life. Boatto’s writing, which condenses Duchamp’s indifference, Artaud’s ceremonial cruelty, surgical coldness by Marchese De Sade and other dysphoric suggestions of contemporary literature, connect its circumnavigation of the uncanny to the great tragedies of modern times such as Holocaust, the historical and existential failure of postmodernism and the orientation of contemporary society in the direction of impersonality and anonymity. The indiscriminate and totalitarian death in nature is then superimposed by the historical death of a man reduced to material and object of exchange in a piercing intuition of the results of an epoch-making process at that time was still in embryo.

At a distance of 43 years the same gallery hosts a new exhibition, conceived as psychic evocation, which reaffirms the centrality of the three basic issues identified by Boatto in conscious opposition to certain common trends in contemporary art that seems more and more secluded from the facts that influence in a tangible way our existence.On the base of pictures and text that accompanied the historical exhibition, Paolo Chiasera brings past to life with an environmental installation designed as a curatorial space where works by artists of the last generations variously focused on death, rebirth and the afterlife are related with those exposed then to regenerate their revolutionary impact. The device, generated by the connection between the principle of Exhibition Paintings (depiction of an exhibition of painted works) and the habitable structures of Second Style, identifies a sort of overshoot and conservation of the two genders previously created by the artist by converging the performative dimension linked to life into the evoked or real physicality of the works performed or actually present in the display. So in this way Chiasera acts as an curatorial intermediary in a seance in which the pictorial medium is used for converting a typically contemplative mental space in a place of psychoanalytic contact. The panels that show transient visual traces of the ‘70s works and fragile gashes and translucent shades that materialize memory lapses intended to amplify with the passage of time, work as a hypertext which links past and present beyond the horror vacui of the white page with the echo of the words of the Florentine critic recently disappeared. Mentor of this transaction is indeed Boatto, who shortly before his death gave a final critique for the show, portrayed by Chiasera hybridizing his appearance with those of the poet-sorcerer Cecco d’Ascoli sentenced to the stake for his heterodox religious thoughts.

The exhibition unfolds in a dense network of references and confluences beginning with Father, minimalist and performative shape by Vajiko Chachkhiani, that is generated by a man sitting with his feet trapped in a block of concrete that will preserve forever the marks of his absence. Oedipal Torture where the passive and neutralized father continues to inspire awe from his throne, recalls Lo Scorrevole (1972), incestuous constriction by Vettor Pisani o Lo Spirato (1972) by Luciano Fabro where the trace of a missing body becomes sculpture and camouflage cavity. If Boatto spoke about “a ceremonial of interrupted put to death” to emphasize the difference between the cathartic completeness of ancient tragedy and its deferral outside the art work in the modern artistic ceremonial, also Anca Munteau Rimnic in Invention of Time Passed as a Carpet shows a suspension and the possible deviations that opens up the access to life. A warp of white wool threads supports a network of hand-colored threads with different shades of black that stops in the middle and then curl up under the art work standing in a tangle of not exhausted eventualities in a lapidary representation of our short-term relationship with death. The black wire, in its ambiguous value of rope-hope, returns in the performance that solves the interruption in perpetual repetition: a modern Sisyphus eternally condemned to pull him the same rope without ever reaching its end, symbolizes the stubborn curiosity and confidence that obliges man to act to seek answers that perhaps will always be precluded.

Instead aspires to a new renaissance or a definitive disappearance Riccardo Previdi which in Cocoon is immobilized and enveloped by an elastic membrane used in the ‘50s to protect from salt US planes and tanks exported in Europe by sea. Deprived of the process control, the artist stages a kind of regress to a synthetic uterum that remotely communicates with The Chrysalis (1972), performance in which Claudio Cintoli hanging upside down in a closed lot was laboriously trying a way out, and with the similar burial of Pino Pascali in the behavioral video SKMP2 (1968) by Luca Maria Patella. Immolating himself to become a commercial object, the artist also drawn to the macabre collections of items proposed by Fabio Mauri in which Jews literally became raw material for production of consumerist goods assuming the possible outcomes of Nazi ideology victory. Although fortunately this macabre prophecy has never been fulfilled, the substantial and visual adulteration of our world intoxicated by phobias and addictions is an established matter of fact, as it is recalled the hyper-realistic bronze Dunuts by David Adamo, eager objects placed on the ground in eerie circle where once laid the Lead Crown (1969) by Luciano Fabro.” Gino De Dominicis wishes all the immortality of the body,” it was written in his Greeting Card in 1971 and the same hope that after death can always be a new life for art is perhaps, as highlighted in the text of presentation written by Antonio Grulli, the deeper meaning of this artistic profanation which reactivates old demons never dormant in a colder amalgamating with new obsessions in the elsewhere of an impossible continuous time. 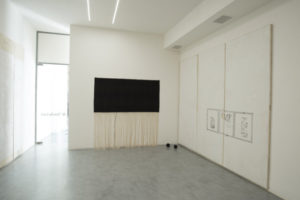 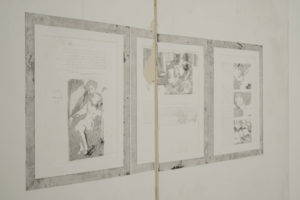 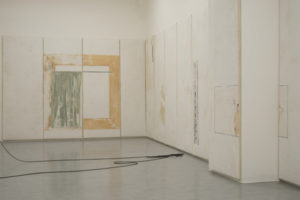 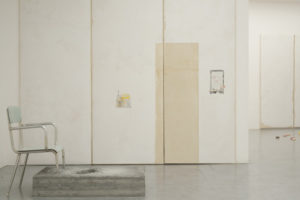 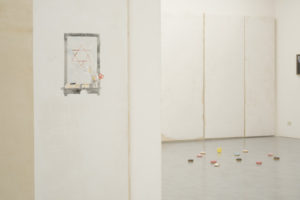 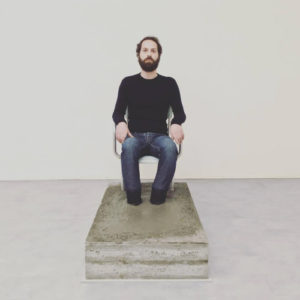