Reinhard Mucha at the Kunstsammlung Nordrhein-West...

The Kunstsammlung Nordrhein-Westfalen is located in Düsseldorf, Germany: it is a modern and contemporary art museum of international vocation, and has two locations, called K20 and K21: K20, whose collection consists of Western and American artwork, overlooks the Grabbeplatz, opposite to the Staatliche Kunsthalle and the Kunstverein; while K21, whose collection is centralized on artworks created after the 1960, is located near Ständehaus.

Now, in the two locations K20 and K21, the Kunstsammlung Nordrhein-Westfalen hosts an exhibition with installations by Reinhard Mucha (Düsseldorf, 1950) that have not been presented to the public for many years. The works unfold through an overview that encompasses over forty years of work by this very particular artist, who has always worked in terms of redefining sculpture, installation and photography. For Susanne Gaensheimer, director of the Museum, “Reinhard Mucha is one of the most important international artists from the 1980s, and he has made a significant contribution to our current understanding of sculpture, installation and conceptual art, radically broadening the definition of what can be understood as sculpture”.

To all intents and purposes, “Der Mucha – Ein Anfangsverdacht”, curated by Falk Wolf, after the double appointment in 1987 at the Kunsthallen in Bern and Basel, is the first major exhibition that comprehensively presents his entire path, from the beginnings to the subsequent developments, touching all its aspects of form and content. We point out, in particular, the harshness and severity of his language as indices of an awareness of history and reflection on contemporary society. In this way his works can be framed and lived in a context where the past and the present interpenetrate and where the events of an industrial epic (the one that should have brought happiness and progress to the whole world) are not only contaminated with pop culture (which could instead be understood as an ironic critique of consumerism) but also with biographical or personal notes. Through these superimpositions, through these lines stretched between multiple worlds, the author manages to transform seemingly disparate thematic nodes into complex and meaningful structures, to the point of overcoming the frost of form in order to result in a quality that awakens the senses and stimulates the physical perception of the object presented.

The distribution of the artworks between K20 and K21 results in two very different situations. While K20 offers Reinhard Mucha the unique opportunity to compare three large installations and several works recombined in an autonomous spatial installation, the second floor of K21 presents a succession of twelve rooms with more than sixty pieces carefully selected to reconstruct a path of almost fifty years of work. The key artwork “Das Deutschlandgerät”, which has been exhibited here permanently since 2002, is one of the nodes of this exhibition and its starting point. Mucha originally conceived this vast site-specific work for the German Pavilion at the 44th Venice Biennale in 1990. At the time Mucha occupied the pavilion together with the couple of photographers Bernd and Hilla Becher. As a partial reconstruction, the installation was not only specially adapted for the space that has housed it since 2002, but also expanded to include a sound and video installation. On the occasion of this exhibition, the work underwent a further technical and content adaptation by the artist. This work compares with his first fundamental artwork: “Wartesaal”, [1997], [1986] 1979 – 1982, never exhibited to the public since documenta X, 1997. These two installations constitute to a certain extent the energy poles around which the other rooms rotate. These include more recent works such as “# Hashtag mit Lichtblick im Pain”, [2019] 2001, but also important 1990s landmarks such as “Documenti I – IV”, 1992, the installation created for documenta IX (1992) and some early works such as “Baden-Baden / Standard II”, [2022] 1984/2022, brought together here for the first time in a new way.

The central work of the K20 is “Das Figur-Grund Problem in der Architektur des Barock (für dich allein bleibt nur das Grab)”, [2022] 1985. This is one of the few surviving installations made of everyday objects combined with museum furniture. For the first time since 1985, the work, part of which is in the collection of the Musée national d’art Moderne / Center Pompidou, in Paris, has been recreated in its complete form. In addition to these spectacular pieces that in themselves indicate the effort made to create this exhibition project, we point out, “Frankfurter Block”, [2016], [2014] 2012 and “Stockholmer Raum (Für Rafel Moneo)”, 1998, as gems that are contained within the exhibition itinerary. In this fusion of dates and mixture of past and present, between the original piece and the recombination or remodeling or rearrangement, this exhibition by Mucha also becomes a desire to reflect on exhibiting any work beyond a pure philology.

The exhibition will be accompanied by a catalog (400 pages, Hirmer Verlag Editions) curated by Susanne Gaensheimer and Falk Wolf and, in addition to the introductory text by Falk Wolf, it will host specific essays by Julian Heynen, Stefanie Kreuzer, Sebastian Egenhofer, Kolja Reichert. The exhibition is financed by the Art Mentor Foundation Lucerne and the Kunststiftung NRW, while the installations at Bel Etage were supported by the Stiftung Kunst, Kultur una Soziales der Sparda Bank West. 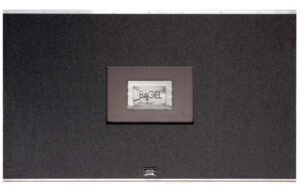 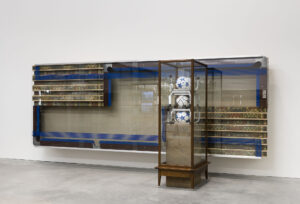 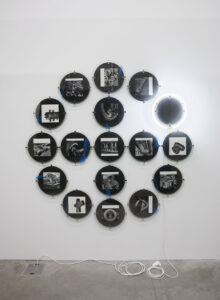