The fragment as a tool. Maria ..

Salvatore Nocera. A decade of delay

Salvatore Nocera. A decade of delay

Born in Bologna in 1928 and moved to Paris in the late 1950s, Salvatore Nocera, an artist who was intellectually restless and reserved, never exhibited in his hometown and left evanescent and confused traces of his artistic production, neglecting titles and dating and sometimes coming to destroying his own works or claiming possession once sold. A man of great culture (his library has about 8,000 volumes that heirs recently decided to donate to the Istituzione Biblioteche di Bologna), for sixty years he dedicated himself to pictorial research obsessed with the fear of not being enough in the constant tension between the awe for the great masters of the past and the inability to compromise with himself to embrace the most updated currents without reservations. “I’ve always been late, at least for a decade,” he wrote in the diary pages to which he confided his mental ruin, and that critical awareness is the starting point for the exhibition that cultural association Bologna per le arti devotes to this elusive character at a distance of nearly ten years after his disappearance. The aim is to reconstruct his biographical and artistic path and the never-ending bond that, even remotely, linked him to Bologna and offer a posthumous opportunity to his undeniable talent to be placed among the pages of the complex history of 20th-century art enhancing his asynchronous condition.

The exhibition begins with a series of paintings painted in the early years when Nocera, overtaking the historic realist painting with which Italy celebrated the heroic acts of anti-fascism in order to grow a nationalist culture of exaltation of Resistance, freed himself from ideology to focus on a figure painting that absorbed the Florentine and Emilian Renaissance lessons on a personal note. Piero della Francesca, Masaccio, Cosmè Tura are at this time the main references of a composition characterized by an almost architectural style harmony, in which the characters group together in the foreground, recalling the paused performance of a classic frieze. But the academy of the initial system is immediately questioned by the ambiguous iconology of characters that hybridize classical and Christian iconographic attitudes with modern attributes revealing the artist’s intent to capture contemporary moments of contemporaneity to idealize them into a new mythology. His favorite subjects at this stage are bathers intent on the most typical holidays activities that are experimented in an absorbed and ordered way, as if they wanted to make every trace of individuality disappear to offer themselves as a pure pretext for representation. The strictness of the compositional structure is tempered by a concise brushstroke (in some cases bright and lit, in other slight forms such as the imprint of an unfinished fresco) that revamps the impressionistic technique in a structural and mental key, rejecting the fleeting atmospheric impression.

And the interest in the immediacy inherent in the color leads Nocera around the mid-60s to surrender to nature that begun an absolute pictorial, in which even the figures, increasingly dissolving and camouflaged in the environment, end up to flow and delete. The large canvases realized during this period revitalize the landscape with an informal approach not dissimilar to the outcomes of the “last naturalism” born in the 1950’s in Bologna according to the international trends in Paris, where he had moved to joining the National Artistic Union French, culminated in the work of Fautrier and Dubuffet. Even here, the nonconformity which is perhaps the most peculiar and lasting individual trait of Nocera, pushes him not only to adopt certain visual solutions according to a subjective timing dictated by internal needs, not to entirely abandon himself to the organic mixture in which the world is born and it is renewed to recover the constructive lesson of Cézanne in the direction of an order that arouses the final disintegration. Thus his painting became material, vital and pregnant of gestational and biological stratifications, it opposes the dissipating anarchy of currents seeking in abstract expressionism the solution of the crisis of the European pictorial culture to engage himself in a reconstruction of the world in which look and memory can continue to live together.

In the following decade, the existential crisis of Nocera was aggravated by the misfortune of his personal affairs: alcohol abuse, divorce from his wife who supported his artistic research and disappointment for the lack of recognition of his work brought him back to Bologna where, in the absence of an atelier, he leaves the brushes to dedicate himself to collages and photomontage approaching the French Nouveau Réalisme. A few years later, a relative tranquility was found thanks to the encounter with the new partner and musa Felicia Muscianesi, and he returned to painting once again in a dissident position compared to the forced return to the figuration decreed by the monopoly of Transavanguardia and Citazionism that sprang in the eighties in Italy. Overwhelmed by the inadequacy that has always accompanied him, he was locked in himself and endlessly procrastinated interesting museum retrospective proposals (such as Franco Farina’s, director of the Palazzo dei Diamanti in Ferrara, or of Licisco Magagnato in Museo di Castelvecchio in Verona) to engage himself in a cycle of the losers inspired by the stories of Joan of Arc, Gilles de Rais and Van Gogh. In these last works, the pictorial substance, which is rough and contaminated by material insertions, expresses the wound open by the awareness of an unlikely ransom and resignation to an obsessive and unbearable practice experienced as an arduous but inevitable destiny. 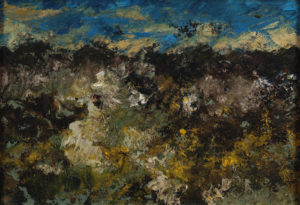 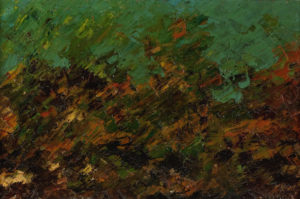 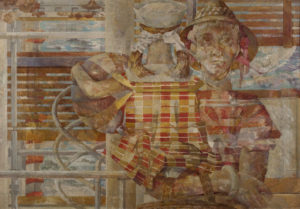