Christian Jankowski. Art as an..

Sarah Morris. Machines do not make us into Machine...

The sense of air without notes..

Sarah Morris. Machines do not make us into Machines | White Cube, London

At the White Cube in London, the solo show by Sarah Morris, an English artist who has long been based in New York, presents a selection of unpublished works, reflecting on architecture, film and painting, and questioning her abstract composition in light of new relational typologies which derive from global and urban contexts. For those already familiar with Morris’s work, it is evident the echo of Modernist abstract painting whose vocabulary, traditionally thought through line, shape, color, and composition, is here renewed with a new indexical language that the artist draws from the rhythm of contemporary cities, becoming the scene of new networks and relationships as generated by modern technologies, connections, and forms of communication. Inevitably, by looking at progress and at the new order of relationships created by it, the artist wonders what is the dynamic agent that allows us to imagine new relationships in an increasingly technological context. The point of observation of the artist can be deduced from the installation Hellion Equilibrium, 2019, recently installed at the 39th Avenue of Long Island at the New York City’s Metropolitan Transportation in New York, the first glass installation by the artist rethinking urban space through forms of reflection, fragmentation, and the transparency of the city.

At the White Cube, the exhibition opens with an immersive environment that invites us to inhabit the conceptual dimension of Sarah Morris’s painting. Ataraxia’s wall painting, 2019, which covers the entire walls of a cubic space, intends to suggest, as the artist defines it, a state of imperturbable calm in which lines, points, and surfaces converge in a pictorial and abstract dimension through forms of energy and contemporary dynamics. This expanded thought, composed of patterns and chromatic geometries, finds an ideal context in the sculptural, cubic, and minimalist volume of the installation What can be explained can also be predicted, 2019, composed of circular modules in glass, plastic, and marble, and describing an urban monument for multiplicity.

An entire room is dedicated to the artist’s pictorial works which are characterized by the reinvention of the abstract modernist vocabulary, creating an analogy between the visual and the textual elements of her works, not only through forms of inscription but above all through digital codes, mathematics, diagrams, and new forms of mapping. Whilst remaining conceptual in the artistic process, Sarah Morris’s abstraction is therefore a form strongly rooted in the urban context by questioning its internal logic and dynamics, such as for the series of paintings [Sound Graph], 2019, composed of several compositions derived from audio files and revealing new compositions such as Bad City, 2019, Property is Compensation, 2019, Aggression of Thinking, 2019, The Building as a Pretext, 2019, Reality if its own ideology, 2019, wherein Morris rethinks the geometry of lines, fissures, patterns, and circularity according to a graphic sound that evokes the pressing rhythm of the modern city and its industriousity. What emerges from her work is a frenetic dynamic that at the same time suggests an internal harmony wherein it is necessary to take a position if we want to remain participants in this vibrant context, as is evident in the War of Roses triptych [Sound Graph], 2019, wherein the story seems to repeat itself in what is the battle of every day.

The sonorous as well as the imaginative dimension of her work is perceived from the electronic soundtrack of the films presented in the exhibition, as for Abu Dhabi, 2017, commissioned by the Guggenheim museum, and configuring a psychogeography of the capital, cultured and the moment of celebration of the ‘National Day’ in his 46th anniversary. In the film Finite and Infinite Games, 2017, Morris suggests a new way of rethinking an education of thought in the social context through a short film based on the novel by James P. Carse, shot at the Hamburg Philharmonic by architects Herzog and de Meuron. 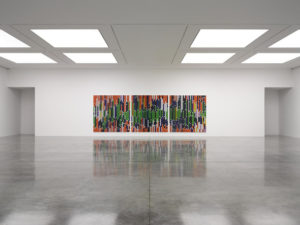 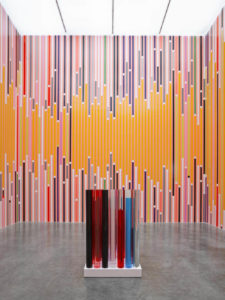