Sarah Morris. Machines do not ..

Few have come to the mid-career with the same freshness of thought and the same enthusiasm of Christian Jankowski: the German artist, born in 1968 in Göttingen, lives and works in Berlin, many times invited to the Venice Biennale (in 1999 and in 2013) and recruited as curator in the 11th edition of Manifesta, over the years has never tired of observing the world with amazement and irony, constantly scanning the increasingly elusive dynamics that govern human relations. The roots of his artistic production, which has always focused on the questioning of cultural and consumerist stereotypes and on the ironic forcing of the boundaries between reality and fiction, sink into conceptual art, in his case interpreted as an explosive amalgamation between sculpture and performance.

Far from sterile ruminations, in his performative events he often collaborated with other professional subjects – magicians, theologians, therapists, officials and managers or operators of the art world – calling them to take on the creative responsibility of reworking contingent situations related to their role, transforming the same participatory process and the time of its development into a work. The topic of interactivity and involvement, since the beginnings central in Jankowski’s poetry, is today more than ever present in the most updated socio-cultural reflection, after the advent of the Internet and new technologies has radically changed our ways of production, consumption and interpersonal communication. And his artistic reasoning never disappoints: lucid, biting and unpredictable, he manages to bring to the surface and make glaring the absurdities and the faults of the artificial equilibria on which the systems of social coexistence are based and to highlight their conventional nature. In his works the unhinging of the preconstituted certainties is only the first step of a multifaceted exploration of the new relational possibilities that arise from the loosening or exasperation of customs. Regardless of formal recognizability, he pursues the immediacy of his intuitions with all the tools that the visual arts provide him with: photography, drawing, sculpture, video and performance, preferably triggered by him in first person and then passing the baton to others who will in turn be able to intervene in the development of his idea.

The show Where do we go from here? at the Enrico Astuni Gallery in Bologna brings together some important work-in-progress cycles by the German artist and an unusual environmental installation to reflect on the theme of participation – or rather collaboration – between artist and public in relation to the most recent curatorial and institutional orientations that identify in engagement one of the main objectives of contemporary artistic production. If with the recent explosion of social networks the public no longer covers only the role of recipient of museum information but becomes the protagonist of the production of virtual visual material that surrounds us and that we feed daily, how the role of the artist in this communication system changes and how important is the direct use of work? Compared to the 1990s, when Jankowski’s analysis began to take an interest in these issues, it was enriched with new strategies which, including the consequences of the digital revolution, strengthened his approach to creation as a democratic platform of encounter aimed at unhinging any type of hierarchy.

The exhibition opens with a visual barrier: at the entrance to the gallery, access is partially hindered by a life-size photographic print depicting a glimpse of the artistic village of Dafen, in China, where painters specialized in the reproduction of works are concentrated of the great masters of history. The image (which gives the title to the exhibition) depicts two public sculptures, which we can imagine of dubious taste, hidden by sheets laid out to dry. Hence the idea of ​​Jankowski to create a resin sculpture that faithfully reproduces his appearance in a juggling pose that makes it possible to make the most of the extension of his body as a drying rack. At the center of the room we also find a washing machine that will be made available to visitors for the duration of the exhibition so that they can “wash the dirty clothes” in the gallery. The installation symbolically reflects the aim of establishing a reciprocal relationship with the public that, while it is stimulated to make the work function (in a literal and metaphorical sense) with his own intervention, it is in turn activated by the work, which it induces him to use the time of the washing cycle to concentrate on the works on display.

But on display the public will essentially find a reflection of himself, starting from the sequence of framed photographs entitled My Audience in which the artist since 2001 documents the audiences who have attended his conferences over the years. The work, which highlights the exchange and coexistence of the two roles, forces us to rethink the relationship between the viewer and who is looked at in an intriguing semantic short circuit. Even more radical the Visitors series, a collection of neon luminous sculptures that reproduce sketches and mottos drawn by the public on the albums of the presences in which the galleries invite visitors to express comments and to leave a signal of their passage. In the vast catalog at his disposal, Jankowski selects the most spontaneous manifestations of creativity and euphoria, those that express the urgency of communicating a reaction stimulated by the exhibition just seen and not the wish to gratify the ego of the author. In this way the artist inserts, through his authorial choice, these otherwise anonymous figurative expressions into the great conceptual tradition of neon in contemporary art, activating a multi-faceted exchange with the public. On the one hand it is highlighted that the introjection and the understanding of the art in the viewer pass through a direct and proactive involvement with the work and not through a passive fruition, on the other hand it is equally interesting that Jankowski – both as artist and as spectator – goes to visit the galleries to find inspiration in the tracks left by the public.

The exhibition ideally closes with the series of paintings entitled Neue Malerei, composed by an alienating series of paintings by Dafen copyists to which the artist has commissioned pictorial reproductions of some photographic images downloaded from the Internet in which anonymous users interpret famous paintings. This virtual community of artistic cosplayers, which shares their own self-representation mediated online by the works of art unanimously recognized as a collective heritage, represents in an exemplary way the mechanisms of appropriation connected to the dynamics of desire that art, if it is effective, should always stir. Jankowski restores these performative transpositions to their original medium, highlighting an inconsistency that is at first sight imperceptible: the painted images do not occupy the whole extent of the pictorial support but present on the margins reduced sections of rough canvas left exposed which signal the difference in format between the originals and photographs of tableaux vivants. The discrepancy suggests the public to actively perceive their presence as an observer and to reflect on the inevitable semantic and formal slips that exist between surrogate and real experience.

Christian Jankowski. Where do we go from here?
curated by Lorenzo Bruni
25 May – 28 September 2019
Galleria Enrico Astuni
via Via Iacopo Barozzi, 3 Bologna 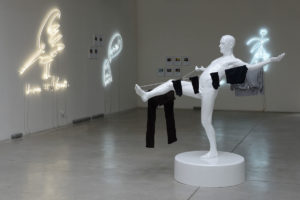 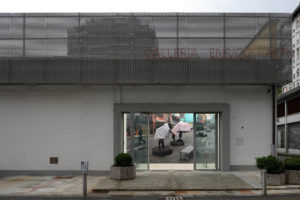 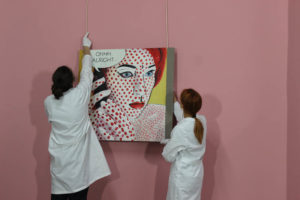