The pictorial cycle Aphonia by..

Christian Jankowski. Art as an..

“It’s like a tower that never collapses to blow the wind,” says Dante about Fanale, the lighthouse of Livorno, one of the oldest in Italy dating back to 1305 and built on a project attributed to Giovanni Pisano. Destroyed by the Germans in 1944, rebuilt and inaugurated in 1956, today it is promoted to open to the public for occasions such as this exhibition by Biancamaria Monticelli, a professional photographer who lives and works between Livorno and French Polynesia.

One of her most interesting strands is that of the rusted wrecks of beached ships on deserted beaches that stand out against looming skies. Here we have some examples alternated with other works dedicated to lighthouses, a Lighthouse in California – Point Reyes National Park – one on the Island of Razzoli and one on Capo Caccia, both in Sardinia, equally crude as the wreckage mentioned above, and so on up to that of Livorno obviously played also this on the comparison between a little girl in the foreground and the tower that stands out in the background.

The metaphorical translation of the meaning of these wrecks that become symbols of a world adrift, wrecked, old, without hope and hope is immediate, running with the children running in the foreground. The artist says: “A lodging that was born in 2017, on the occasion of my fourth stay at the San Blas archipelago, on the Caribbean side of Panama. Returning to the island of Chichimé, I see something new. Beyond the elegance of the palms, the crystal clear waters and the white beaches, an imposing wreck seems to be sleeping on its side, lying on the coral reef that surrounds this tiny strip of sand. From there, the scenery takes shape: some girls, a child, a man, wrapped figures from a milky sky they float like angels of a surreal atmosphere ”.

When we travel we are looking for new worlds, new landscapes, maybe the famous pristine places. But the eye of the photographer does not only look for an ideal beauty, she looks for sets in which to insert her own thought, which gives substance and life to her own vision of the world. The place to stage her idea of ​​photography.

And in fact the author continues by saying: “I have the impression of being in a theater, a natural theater, where casual actors act in front of my camera, dancing to the rhythm of a magic that lights up, suddenly. I reflect on this vision, because that is how I feel them, visions of a world away from everyday life, silent, hidden … a world that belongs to me and leads me to reflect on the deeper meanings of life. These scenarios return, in different times and places, I find myself searching for them and I perceive their human value beyond the apparent and clear aesthetic value “.

It is therefore a theater in front of which Biancamaria Monticelli is located. A ready-made theater whose set designers are nature and men. Nature offers beaches, seas and vegetation. And within it the presence of man. Or rather the human post. What man has left, his leftovers, the result of his technology in its obsolete form. And then the re-start. The primal form of what will be the man who will forge objects to change the world, but still innocent, carefree.

And she adds: “The fascination for these giants that show themselves in their anthropomorphic appearance, sleeping carcasses, wrecks of a lost life on whose ashes life is reborn … Here is the importance of the child who runs, free, contrasting life with death, but even where death does not seem so terrible, rather impressive in its beauty and in its mystery, like the child of the archipelago of Las Perlas, who dialogues with his packet of potato chips, the Greek boy who runs, leaving behind the Dimitrios’ rusty giant, the little blonde princess who explores the world, under the melancholy wings of a dry wreck, the children cackling in the wild waters of the Marquesas, in the background the imposing and legendary “Aranui” …

Her research is not limited to the now-obvious discourse on pollution of the seas. Her final confession reveals the mystery of the fascination of these images:”Children represent my alter ego. It’s me looking at the world with pure eyes, who continue to believe in dreams, who want to remain in that limbo of fragile happiness … “ 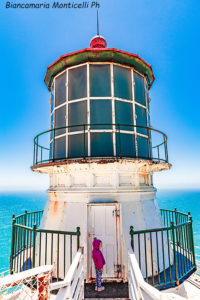 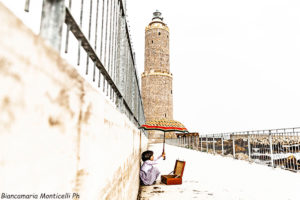 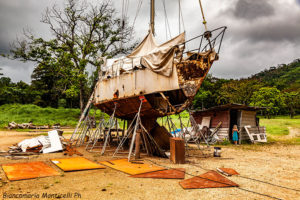