Monumental, total, majestic; it’s hard to bring in mind an exhibition organized in Hangar Bicocca in Milan, which wouldn’t make the grandeur impression and wouldn’t be accompanied by the specific subcutaneous seriousness. Sheela Gowda (born in Bhadravati, Karnataka, India, 1957) doesn’t disappoint us with the “Remains” display, inviting us into a strange and fragrant world. The exhibition is curated by Nuria Enguita and Lucia Aspesi, and it lasts from 4th April to 15th September 2019.

About thirty years have passed since the artist began working, starting from traditional oil painting on canvas, gradually shifting her attention to objects and everyday materials. First, Gowda studied painting at the Ken School of Art in Bangalore. Later, she attended the M.S. University of Baroda and the Visva-Bharati University in Santiniketan, still remaining in the classical, two-dimensional and traditional artistic language. After graduating from the Royal College of Art in London in 1984, she returned to India. “Manipulating a material is a way to understand its limits and potential … For this reason I don’t make explicit the physical dimension of my art-making” – explains the artist.

“Remains”, leftovers, remaining objects – are artifacts and waste materials with a certain symbolic value, found by the artist, observed, modified and placed in the center of an interest of her first individual exhibition in Italy. Gowda stresses out that it’s a great challenge to bring a concept to the formal language. Materials, which she rightly uses, have their own contexts, so while trying to physically transform them in various ways, she tries not to lose sight of their identity. At the same time, the Indian creator interweaves and communicates her ideas with their contribution. Gowda declares, that she never made sculptures in the strict sense, but she’s always used to make installations that relate to their surroundings, as well as to the spectators themselves. “When the object is well defined, there is nothing left to say. When you find something, that, at this very moment, is simultaneously in a phase of being and not being, of becoming, instead, I think it’s much more stimulating and interesting, and also more adequate for what you want to express “- she claims.

There are twenty-three works by Sheela Gowda, exhibited along the naves of Hangar Bicocca, created from 1992 to now. The most recent are “In Pursuit of” (2019) – 15 kilometers of the human hairs’ strings – hung properly in the raw space of the last room, and the “Tree Line” (2019) composed of a large piece of black rubber. Both were designed specifically for the exhibition. The use of hair refers to rituals – votive offerings to invoke a deity; everyday life – lucky charms; economy – sale on the world market. Thus, the concrete ordinariness is represented by the material, whereas its presence in space, the dynamics that occurred within material-space-viewer relationships, and finally, physical modifications induced by the artist, the abstract result and the overall ephemeral approach, refer to the artistic gesture, where form, material and context come together. “Art is how you see things and how you value things that surround you” – summarizes Gowda.

The same rules and processes push the artist to use cow dung, in India, where this animal is sacred and its dung has such a wide context: ritual, religious, productive (cow dung is used to generate fuel, fertilizers, bricks, sculptures and toys) and sustenance (milk). The parallel nature of the material, both waste and sacredness, gives an added value to the conceptual perspective. As a result, it’s willingly used in artistic practice and becomes a tool for Gowda to express a political stance that uses religious symbols for conservative purposes.

Some incenses from the collection entitled “Collateral” (2007) were burned up to the point of becoming an ash. An observation of  such a delicate ephemeral substance evokes the feeling of the passing of time, recalls the memory and leads to the theme of the remains. Noteworthy, the “remains” exhibited in the gallery are always refined and placed in space with the highest precision. You could risk calling them “relic” for their historical, metaphysical weight, and the sacred and poetic atmosphere they carry within.

With an abundance of the delicate and ever-present aroma of incense, the smells of dung with which three works are spread (“Mortar Line”, 1996; “Untitled (Cow Dung)”, 1992-2012; “Stock”, 2011;) , the weighty scent of rubber, and the vibrant colors of kumkuma everywhere, we really run the risk of having the impression of finding ourselves in a meditative space on the other side of the world.

video: Sheela Gowda – ‘Art Is About How You Look At Things’ | TateShots 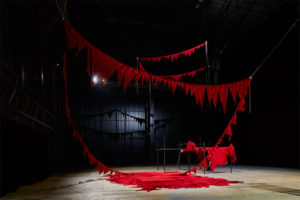 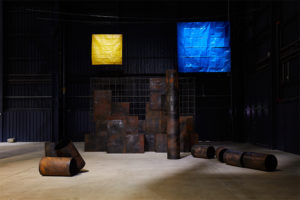 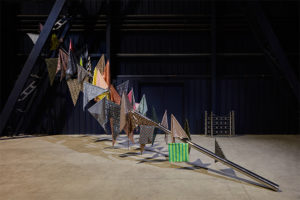 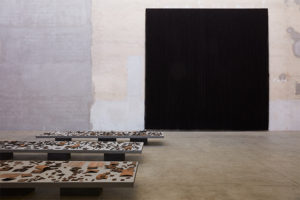 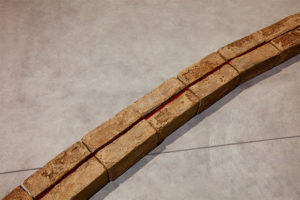 For all the images: Sheela Gowda. Remains installation view at Pirelli HangarBicocca