Eros and Pathos strip away ancestral bodies and forms. Fluidity of a sign in cohesion between violence and harmony. Carnality of a human in dichotomy between the intimate and the visible. Imaginative and sensual tones unravel a skein of gestures between the sacred and the profane, not in its biblical interpretation, but in its purest earthly belonging. The instinct for pleasure is the difference amid these things, and the artist is adept at representing it. 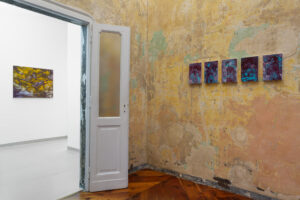 It is from this premise that the title and the exhibition itself come to life: Les différences entre les choses by Simone Stuto – a painter from Caltanissetta born in 1991. It is the exhibition that encompasses the senses in a satisfying synaesthesia, in which matter becomes flesh, in which drives become colours, in which the dramatic nature of figures become symbols. The chromatic register that the artist chooses to use has the capacity to arouse sensations and emotions in accordance with the human perception, hormonal releases of suggestions that circulate from shades of red to strident purples, from non-neutral greys to the purest and most intense yellows. Warm and cold currents meet in the paintings, seeking to coexist in an impetuous exploit. Simone’s art is about earthly life, the carnality of existence, the cravings that drive awareness and choices. He superimposes forms, places and situations, leaving only the most significant parts that stimulate the gaze. A careful study of post-modern and contemporary art turns out to be the pictorial and figurative line that the painter chooses as the propensity for his works. There is the sign-like corporality of Viennese Expressionism; Mannerist and Symbolist ideologies; perspectives and proportions deliberately frowned upon as references to Baconian suggestions. There is no lack of references to more oriental cultures with the curvilinear pictorial details to be found in the skies and environments that welcome the figures thus represented. 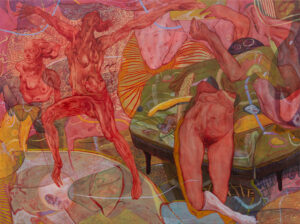 Inside Riccardo Costantini’s gallery – placed in the San Salvario district in Turin – Simone Stuto, together with the shrewd curatorial guidance of Francesco Poli, puts his pictorial material on display, starting from the drawings that are both sketches and finished works. Each room takes a different colour scheme to differentiate and compare the sequence of the exhibited oils. Boudoir is the most emblematic work, that clearly manifests the painter’s workmanship. Sexuality and sensuality pervade the reddish figures at the centre of a familiar and everyday environment. The scene is suspended in that moment that precedes the vivid impulses of the being. This exciting teeming of emotions contrasts starkly with the second (in dimension) work in the exhibition. 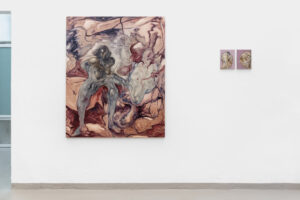 Il mio volto (che non vedo) non proietta più un volto allo specchio is the long title of an oil on canvas of absolute expression. The figures appear soft, deformed, in continuity with their surroundings, as if incorporated into being, as if devoid of their own life. They are bodies that put carnality before enigma, disquiet, and intimate violence. With the succession of other works on view, one comes to admire a work of particular workmanship. Salmodia is a polyptych created from a relative’s cabinet in which Stuto depicts two scenes, an exterior one and an interior one, in conjunction with each other. In the external part one can see a vaguely sacred setting, like an ascent (or descent) of something (or someone) enveloped in a brilliant light. In the inner part, on the other hand, the colour takes on cold tones, the blues and purples show the human impetus separating two figures on the left and right. It could refer to Masaccio’s Cacciata dal Paradiso, but nothing in this story has biblical connotations, what it is about has to do only with the earthly soul. 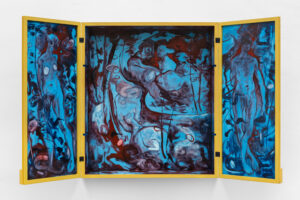 Simone Stuto is a romantic alchemist, who charges his works with pure vitality. The figurative tension of his pictorial matter knows how to involve the innermost human needs. He knows how to balance form and formlessness, colour and sign, surreal and chaotic reality. His art is allusive and direct, fascinating and galvanizing.