In conversation with Uffe Isol..

«The exhibition is about cops and cars…about cars and cops, cars and street guerillas. PAGHERÒ DEMAIN is a reminder for the cops who never pay. It’s not clear to us either but the exhibition is a kick in the nuts.» Nøne Futbol Club’s solo show – we agreed with the owners of ChezPlinio – speaks for itself, which is why there is not any traditional theoretical introduction to the exhibition, as the show speaks also for some “others”. Who are these “others”? A small 6 x 10,6 cm photograph blends into the white-dirt exhibition space and portrays a French policeman going belly-up while catching fire (Work n°068: French Cancan, 2020). The photo was taken during the 2016 Parisian demonstrations, which arose again the last April for the second runoff between the two right-wing candidates Macron and Le Pen. This exhibition is about the “others” protesting in the squares. 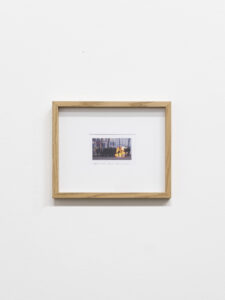 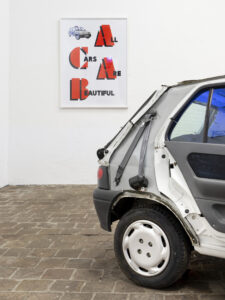 Since 2008, Nøne Futbol Club has been approaching art as a trickster’s game, taking inspiration directly from the jesters’ mouths, from popular notions, sayings, proverbs, drawing from the worlds of motors, football and the street. This is evident in the joking overthrowing of contemporary slogans such as ACAB, which greets us in entering the exhibition like a blood stain on a crime scene against the State. ACAB or Work n°911: All Cars Are Beautiful, 2018, manifests for the first time a recurring element in the duo’s research: a Renault Clio car, which is installed life-size in the center of the space, projecting onto it the blue light of its still-lit headlights. If we interpret the car as an extension-fetish of our bodies, we notice that contemporary culture has applied on it the same Western principles of enclosure and security, turning it into a way to pass through a riotous world without being captured by it. Polished and laminated: in the car every sign of incompleteness, every protrusion and appendage has been eliminated in the production process. However, in the French police Clio (Work n°911: All Cars Are Beautiful, 2013), found and transported to Vigentino by Nøne Futbol Club, what appears to us is the reverse of this seductive icon of private property: every piece of the car body has been disassembled and reassembled in reverse by the artists, showing the car’s “innards”. Similarly, the plastics of a series of pens, belonging to the Carabinieri and the Italian Air Force, have been chewed up and sculpturally reassembled on the left wall of the exhibition space in the only brand new work in Pagherò Demain, such as Work n°282: The Call of the Wild, 2022. 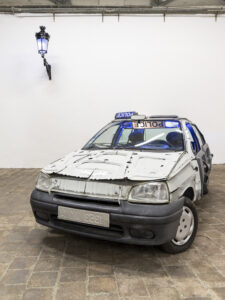 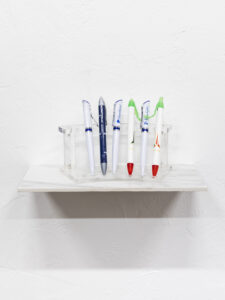 All of the Nøne’s artworks are numbered like the objects in a criminological archive, where the crime committed by Nøne Futbol Club is tracing and exposing the violence of our system’s productivity, of fastness and progress, of bourgeois ideas of safety and security, the violence of the policeman coming home for dinner after having hit with his billy-club a girl demonstrating for climate change. This group of works, which goes from 2013 to 2022, finds its completion in the upside-down Clio, which suggests the presence in the exhibition space of a heinous and, at the same time, playful atmosphere: that of a world which has been reversed. To understand this point, the invitation is to come back to the squares and to an antecedent of the aforementioned political manifestations: the medieval carnival with its comic actions and rituals, which occupied for days the squares and streets of Europe, particularly in the countries of Romance culture such as France. Opposed to the official forms of worship and ceremonies of the church and the feudal state, these square occupations built a “second world” next to the official one, which temporarily abolished all the hierarchical relations, privileges, rules, and State taboos. For Michail Bachtin[1], the annulment of hierarchies produced a special kind of communication, peculiar of the carnivalesque square and characterized by the original logic of an upside-down world, by continuous permutations between high and low, achieved through parodies, disguises and a special form of laughter that dethroned all forms of power. During the “festa dei folli”, the “festa dell’asino”, as well as in some agricultural festivals, such as the grape harvest, a grotesque reverse of the world was staged: the social and power relations were subverted, it was also allowed to address the authorities with a principle of mockery. Demonstrations, parades, barricades, as well as Nøne Futbol Club’s upside-down Clio, keep still alive within themselves that ritual mockery of deities found in the oldest comic ceremonies. «Turning a car over», the duo told already in 2011, «is one of the first protest gestures that recalls the images of riots where cars are turned over on the roof»[2]. Here, then, the mocked deity is the array of policemen motionless in the face of advancing protesters, the militarization of a State in constant “state of exception”, fighting the threats that it invents. 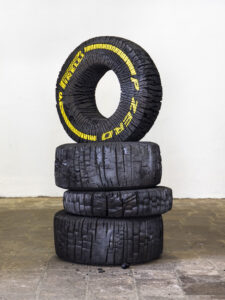 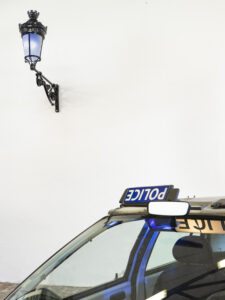 Returning to the photograph that opened this text: the policeman seems to be performing a sympathetic dance, reminiscent of the French cancan. The cancan itself was, in fact, in Victorian times, a protest in the form of a social choreography, which was meant to uncover the skirts, turning them upside-down and, thus, freeing women from a number of social and clothing constraints. “Upside down”, therefore, is the leitmotiv that accompanies Pagherò Demain, according to the artists it is «the way of revealing and understanding an object, a situation» of «inducing a new meaning to our perceptions» thanks to which we feel «deceived, questioned»[3]. Thus, what appear as real tires piled up in a niche on the right side of ChezPlinio turn out to be charred pieces of maple (Work n°144: Hot wheels, 2017), playing again on deception and the estrangement of our point of view. An analysis of the latter work, recently published on ATP Diary, reveals how the inscription, stamped on one of the four tires, recalls one of the wheel models considered among the safest on the market, the Pirelli P Zero[4]. Again, the theme of “safety” emerges, closely related, as we have seen, to the body-car, but also to the constant presence of police forces on the roads and in our cities. Jonathan Simon, in a famous 2008 text[5], traces the triangulation of fear-security-social control, illustrating how the neoliberal model governs by insisting on risk and its prevention, on a pervasive feeling of fear of a now impoverished middle class, in order to maintain a margin of control over the citizenry. The “kick in the nuts” that we hope to feel concluded our visit at ChezPlinio for me came exactly from these two core questions: how much freedom have we been willing to give up as a social body in the name of “security” and, most importantly, who is it that we are really protecting? Perhaps the cops, who never pay. Nøne Futbol Club’s reverse-works, applying the ancient principles of grotesque realism to contemporary imagerie and considering the possibility of a second “upside-down” world, confront us with the imaginative and generative power of the lack of security in squares, in cars, on the street.