SMACH 2019: a constellation of art, culture and history in the Dolomites

The works selected for the fourth edition of SMACH, an international art competition dedicated to Land Art focused on the combination of “art and nature”, will be open until September 6 in an open-air exhibition. The winning artists have created their installations, specifically designed for the various sites, in 10 locations of historical and cultural interest in the municipalities of San Martino in Badia and Marebbe. The aim of the festival is to promote an in-depth knowledge of the historical, cultural and traditional aspects of the Dolomite territory through dialogue with art, compared with a majestic and timeless nature.

This edition of SMACH focuses on the word “Heimat”, a noun that is untranslatable in many languages, often linked to concepts such as “native land” that end up being trivializing, if not misleading. Heimat possesses in itself a much stronger identity charge: it does not simply identify a place, but a set of shared and spontaneous values, which lead back to the dimension of childhood, evoking the positive feeling that is unleashed in us when we think of our origins, of our identity or, on the contrary, the sense of solitude and powerlessness that manifests itself when we perceive the loss of this bond.

Among the exhibited works it is certainly worth noting the interactive installation Junín by Anuar Portugal (Mexico City, Mexico) exhibited at Ciastel de Tor where nine suitably truncated chairs are arranged in such a way that the seats form an arch. The spectator can choose which seat to take and the reception will vary according to the location of the work: on the slope of a hill, for example, the most stable and straight chair will be one of those with the legs cut off and not the central one preferable in flat land. The chairs bring together more elements that allude to a delimiting and exclusive concept of Heimat – they are partially embedded in the ground and thus evoke the roots that bind us to our origins; furthermore, the chair recalls a sedentary lifestyle, which implies a precise and restrictive feeling of belonging. Sitting down to rest on one of these chairs will catalyze sensations that will perhaps tend to nostalgic for atavistic memories – the return to the roots is also suggested by the title of the work, inspired by a poem by Borges that speaks of the return to the city of his grandfather.

Equally striking is the installation Homestead by Arianna Moroder (Bolzano, Italy) a composition of colored sweaters placed on the floor in a harmonious synthesis. For ten years the artist has been collecting jerseys of people she has known throughout her life and who, in this occasion, has mended between them. Each piece represents a piece of life, a meaningful relationship, and the artist, like a painter, places them on the ground. Exposed to the elements, within a few months they will fade and pass from an initial state of chromatic contrast to the establishment of a symbiosis with the lawn that hosts them, this carpet invites us to realize the plurality of facets that contribute to the construction and definition of Heimat, which can materialize in one place, but it is above all an emotion that is established in sharing, in the common experience intertwined between different lives and cultures, is a feeling that creates a sense of belonging.

Vague, installation of the artistic group VOLNA (St. Petersburg, Russia) is composed of twenty-seven glass disks hanging from a steel semicircle. Positioned in a panoramic point, the viewer looks through the glass that, thanks to a device powered by a solar panel, constantly change their opacity / transparency. Artists want to recreate the feeling of what we feel when we “immerse ourselves” and, guided by an emotional torch, we always focus on only a few elements, while others remain in darkness. Certain images of our memories will be very vertrautical, but not necessarily they are clear images with clear visual boundaries. In memories of familiar places or childhood experiences, both eidetic and photographic images and images with indefinite contours appear in our memory. The work is therefore an attempt to give a visual form to the Heimat concept: it is something fleeting, complex and fuzzy, that is, it is not possible in its entirety, which necessarily remains undetermined, “Vague”.

Garden by Qai Jiang Hew (Hamburg, Germany) consists of a series of poles planted in the lawn, draped in sumptuous red cloths, designed to stylize the shape of a flower and thus create a garden, in this case a rose garden – a clear reference to the massif of Catinaccio, which in German is called Rosengarten, literally the rose garden. The red color is relevant for the pale Dolomites, so much so that it is at the center of the King Laurin saga and its hasty curse by the formidable outcome of enrosadira (the redness of these mountains at dawn and dusk); and it is precisely this chromatic power that links the exhibition context to the artist’s culture of Chinese origin, which lives red as a auspicious color; it follows an expansion of the Heimat, which, even very far from home, can be evoked in the comfort of essential details.

In addition to the temporary route, an exciting journey into art and unspoiled nature, from this summer it is possible to visit the “SMACH.Val dl’Ert” (Valle dell’Arte) a sculpture park located in the town of San Martino in Badia where the visitors can admire the permanent exhibition of the sculptures acquired during the last editions of the SMACH art competition. Located in an alpine forest, untouched and far from civilization, it collects works by artists from all over the world. Art in a natural context establishes a complementary relationship between the works, which enrich each other through a continuous dialogue. Visitors can spend a few hours in total tranquility in the midst of nature which aims to preserve an authentic alpine dimension. 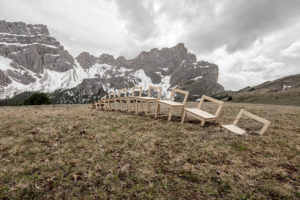 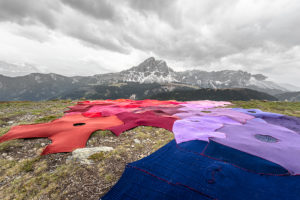 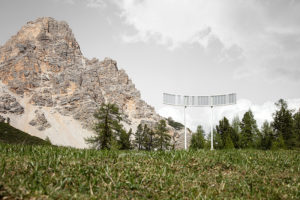 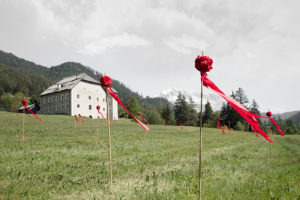 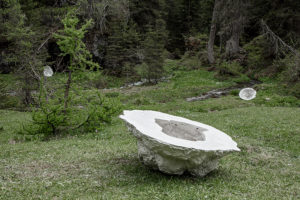