Kunsthaus in Graz, inaugurated in 2003, is a perfect example of a museum container (a bit like the Guggenheim in Bilbao) capable of attracting the viewer’s attention to its physical appearance as well as to the proposed exhibitions. The project, signed by British architects Peter Cook and Colin Fournier, sees a modern body that rests on a previous structure (the Heisernens Haus, one of the first buildings in Europe, built with load-bearing structures entirely in cast iron): the unusual appearance and the estrangement it causes at first glance meant that it was immediately renamed with the nickname of Friendly Alien. It is a building that houses only contemporary art exhibitions, as it has neither deposits nor research institutes inside. Curiously, this Kunsthaus has granted a space inside to Camera Austria, a brand that, in addition to producing a luxurious and important magazine entirely dedicated to photography, also organizes conferences and thematic exhibitions completely independent from the activity of the institution of which it is a guest.

Now, from November 26, 2021 the Kunsthaus is hosting an exhibition by the Danish artists’ collective SUPERLEX. The group (founded in 1993 by Jakob Fenger, Rasmus Nielsen and Bjørnstjerne Christiansen) is known for its critical positions towards the art system and the market in general, and has been involved for many years with creative processes, alternative economies, self- organization and ethical behavior.

For example, the group explored the concept of “economic euphoria” in a series of works that consist of color variations based on a selection of currencies from various countries, arranged in patterns inspired by the Leonardo Fibonacci sequence. The flickering order of colors evokes the illusion that the flow of money is something natural, but also with catastrophic consequences, such as a volcanic eruption or a tsunami. The Fibonacci sequence is a mathematical formula that appears in many models of natural growth, from sunflower seeds to tree branches to the colors of the skin of fish and in not too distant years it has also been welcomed several times in the sculptures / installations by the artist Mario Merz. But at the same time we know that its growth is rapid and can be invasive. Around 300 a. C., Indian mathematicians first discovered this recurring number sequence in Sanskrit poetry. Later the formula was introduced in Western Europe by the Italian mathematician Fibonacci (Pisa, ca 1170-1242), who contributed to the rebirth of the exact sciences after the decline of the Late Antiquity and the Early Middle Ages. Almost psychedelic in its spiraling development, the formula appears to function as a process of expansion of nature, while economic transactions, although sometimes disproportionate, are often invisible or immaterial, since the physical evidence of these movements is not the banknotes but the simple clicks on a computer keyboard. For centuries, money has been a denominator of national identity or the embodiment of the power of an emperor who used to have his effigy printed on the coin, as an affirmation and propaganda of his role. Today, even the increasingly widespread use of ATMs and various credit cards leads this dematerialization process to the nth degree. Instead, highlighting cultural and national pride through visual narration, the color combinations illustrate a more subtle part of the history of money, not only in economic terms, but also in aesthetics. And this visual perception refers to a tactile sense and to a memory of concrete, tangible facts, today completely weakened.

Although the capitalist economy often moves in an unbridled and destructive way (just think of the Wall Street crisis of ’29 and the more recent Lehman Brothers collapse), we seem unable to hypothesize alternatives to the current global market structures, as if we were hypnotized. by a rotating circle that clouds our brains. SUPERFLEX questions the naturalness of the market rules while exploring the almost ecstatic disorientation produced by an economic system always in search of dizzying growth and, to put it another way, devoted to unbridled consumerism. On this path, the group proceeds with interventions that may lead to discussion, but which certainly induce us to meditate.

With a certain touch of irony, a bit like in the old economic development plans of real socialism, this exhibition project by SUPERFLEX for the Kunsthaus Graz is part of a sequence of stages that has developed since 2017 and has seen its conclusion with the vernissage of the exhibition. The first stage was defined by C.R.E.A.M. (acronym for Cash Rules Everything Around Me), that is the ATM placed in the foyer of the Kunsthaus and transformed in fetish / luminous sculpture. This sculpture was followed by the projects Free Shop, Number of Visitors (created with the collaboration of Jens Haaning), Lost Money. All these projects refer to a desire to denounce, to a cry of pain that can be enunciated with four short slogans: a rampant fetishization of money is capable of destroying any other value of the human spirit; the rules of capitalist and liberal society come to permeate people’s thinking like a poison that slowly envelops every level of consciousness; the concentration of economic power in the hands of a few people is dangerous for democracy; the use of virtual currencies and the spread of derivatives and subprime can manipulate people’s real life. The exhibition dedicated to the SUPERFLEX group and the individual projects that serve as a corollary are signed by Barbara Steiner, the director of the Kunsthaus Graz. 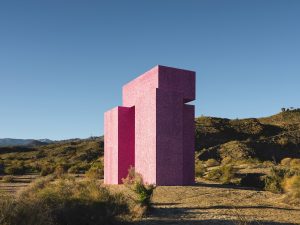 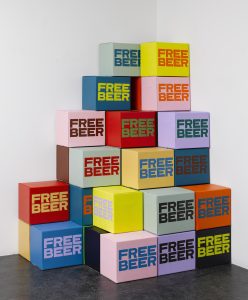 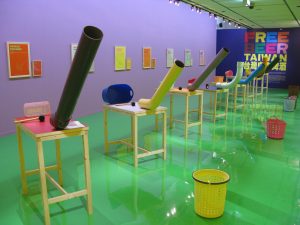 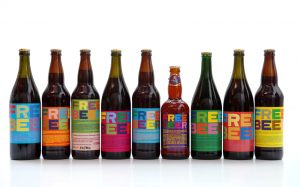