The “Last Judgment” over Beijing and B...

In the story of the things of the world, at least according to historical visions and Einstein’s acquisitions of physics, everything changes and everything is relative. It is therefore necessary to contextualize and relativize both historical and artistic events. In the same way, the way in which words full of emblematic and historical meanings are associated with a precise exhibition context must also be framed. This is the case of the exhibition “The Last Judgment”, recently inaugurated in Beijing. Title with powerful evocations of a certain idea of ​​the history of planet Earth, especially in the West. But here, we are not talking about the Bible but about Bidibidobidiboo.

At this point, it is necessary to be patient. Stop. Take a deep breath and say that we do not intend to speak either of biblical and religious visions or of Michelangelo. The moment has come when, in addition to exhaling, it is necessary in the meantime to defuse that biblical-Michelangelo association and, if anything, to draw a line from Vatican City to China: from the Sistine Chapel to Beijing. Precisely at the Ucca: Ullens Center for Contemporary Art, one of the main private institutions of contemporary art, located in the heart of the 798 Art District of the Chinese capital.

We are talking about one of the greatest visionary men of this century, but also of the previous one, if we consider him alongside other brilliant personalities. Everything has been said about him. Everything and a lot has been said about his works. There was also a lot of talk about the millions of euros to which his works, also made of banana peel and scotch tape, were sold. Of this exhibition in China, inaugurated last November 20 – curated by Francesco Bonami and organized by Liu Kaiyun, Edward Guan, Shi Yao, Anna Yang and Yvonne Lin – it is known that it will be open until February 20, 2022. If they had, however, agreed for the day 22, they would have caught for example the first palindrome day of 2022. Evidently those who decided the dates did not observe these particularities for which the inauguration was made the day after the full moon – in the year of the second Ox according to the Chinese calendar – while the closing day will fall in perfect waning moon and in the year of the tiger. But for a visionary with almost “divine” gifts, such as this artist, the connection with the lunar and Chinese calendar does not matter. It does not bring any meaning to a career that has already begun, signed and immortalized in the history of things on this planet.

It must be said that it is his first personal exhibition in China with twenty-nine works, including installations and sculptures, created in about three decades, with distressing and mockingly irreverent meanings by the author, who has always attracted millions of dollars. He is also the artist who has often witnessed the fall of the myths of the Western world, including globalization, denounced – in his own way – with skeletal works, memorable and skilfully effective in bearing witness to what remains of the idea of ​​the West. And of us after death, one of the great obsessions that emerges in his artistic career.

This time it is the turn of the Chinese public who will also see the artist’s well-known alter ego. In fact, “Untitled” (1997) is exhibited, where his real shape comes out of a hole in the ground and is, almost, a humorous staging of the way in which he managed to enter the history of art, becoming one of the most influential ones. Lucio Fontana from a cut. He also from a hole in the ground. Thus, visitors to Beijing will see his taxidermy animals such as pigeons and “Bidibidobidiboo” (1996) or the life-size squirrel just committed suicide and sprawled on a melancholy and sad kitchen table in a powerful narrative, tragic and paradoxically ironic about an inevitable escape from the fate of death; and then his first work “Lessico Familiare” (1989); the torn canvas by Lucio Fontanta, “Untitled” (1999); the anti-heroic horse “Untitled” (2007), humiliated and trapped on the museum wall; the Sistine Chapel reduced to miniature (2018); the kneeling figure with a paper bag over his head “No” (2021) which inevitably falls under the unknown fate. And many other site-specific works.

In short, a path full of works steeped in humor, existential questions about fate and death with the opportunity not to give recipes or answers but to question observers with respect to what they see in reconstructing their own personal interpretation of art and of the judgment on it. But also about him. Cattelan: the true “naked appearance” – to put it in the words of Duchamp – of this exhibition. He, who can also be unnamed, manages to embody his ideas in visionary, blasphemous, delusional and distressing works to the point of bringing his observers into that uncomfortable, unsettling, disarming, as well as unknown, thanks to that magical Bidibidobidiboo, who has already made him immortal among mortals. Like it or not. 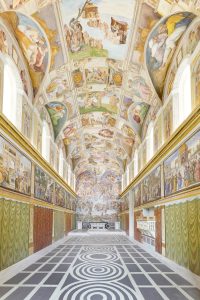 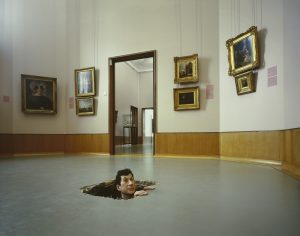 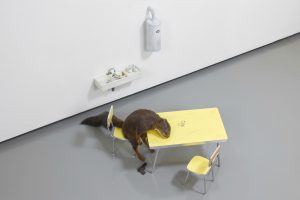