The limes and the invasion. In Trieste an exhibiti...

The group exhibition “The Limes and the Invasion”, organized by the IoDeposito association in collaboration with Trieste Film Festival, opened on January 15 at the Elena Cantori Contemporary gallery in Trieste. The event is part of the B # Side War Festival, a cultural project born in 2014 with the aim of investigating the legacies of the world wars and the conflicts of the 20th century in the new generations. With free admission, the exhibition will be open until February 3, 2021, and will show the unpublished works of the artists Alice Mestriner & Ahad Moslemi, Barbara Mydlak, Carmela Cosco and Nantia Skordopoulou.

For its 6th edition, the B # SIDE War festival focused on the geo-political characteristics of Friuli-Venezia Giulia, those that, over the course of history, have led its territory to represent the geographical and cultural border between the ‘East’ and ‘West’ of the world, starting from the times of the barbarian invasions.

Invited between December 2019 and September 2020 to spend a period of residence in different areas of the region, the international artists who took part in the project were involved in the creation of works closely related to the memory of the place, examining the past of the region and its cultural wealth. In the research phase, they were supported by local historians, cultural activists, teachers and citizens, who were then involved, in turn, in participatory art activities.

In absolute preview, the exhibition “The limes and the invasion”, in the heart of Trieste, evokes, through art works and video and photographic reportages of land art installations and performances created by artists, the history of the visited places, made up of invasions, exchanges, of cultural and identity mixture.

On display the kinetic work “Albero a Gomiti”, a mobile platform that, thanks to a mechanical arm, constantly shuffles earth from Austria, Italy and Slovenia, a metaphor for the continuous mixing that over the centuries has affected people and languages ​​on the territorial border of the extreme Northeast, the result of the artist residency of the Italian-Iranian duo Alice Mestriner and Ahad Moslemi carried out in these same border areas.

Also documented with video is the performance “Luce al Kita” by Carmela Cosco, presented for the first time in Gradisca d’Isonzo in summer 2020, which combines traditional mythology and the historical heritage of the territory as an element of modern interpretation of world, mediating between present and past, taking inspiration from the stories of the Krivapete, the Agane, and the mythical inhabitants of the “magical undergrowth” of the forests of Friuli-Venezia Giulia, touching on the theme of archaic fears and anxieties that have afflicted the humanity of the border areas, pressed by the danger of invasion.

Photographs, collages and objects created by the Polish artist Barbara Mydlak instead document her experience in the vicinity of the Oslavia Memorial, where she set up the site-specific installation “Gates” outdoors. Made of wooden materials, the land art work that is located on the border between the Italian and Slovenian Collio was built precisely where the passages that for millennia represented the access doors to the regional territory, the watershed between East and West of the world, however, taking the form of a symbolic wish for the “reopening of the passage” (and communication) between the two realities.

Also represented in the exhibition is “The Window / Eve & Adam”, a public art intervention by the artist Nantia Skordopoulou inaugurated in summer 2020 in the United Europe Park in Cervignano del Friuli. Reinterpreting the green area as a new garden of Eden, the work evokes the forms of the ancient pictorial diptychs depicting Adam and Eve with a game of mirrors; as in a metaphysical window on the past, the visitor is invited to reflect in the historical landscape of the territory and the park. The artist’s intention is also to raise public awareness on the issue of gender inequality, which has worsened in a territorial context oppressed for centuries by invasions and conquests.

On Saturday 23 and 30 January, from 15.00 to 19.00 there is a service of free guided tours of the exhibition, by reservation only (by writing to magdalena.dokowska@iodeposito.org). Produced by the NGO IoDeposito, the B # Side exhibition involves researchers, curators, museums, cultural institutions and more than 200 artists from 55 countries around the world, a network of 67 international, national and local partners, and is sponsored and supported by Unesco, the Council of Europe and the Friuli Venezia Giulia Autonomous Region. 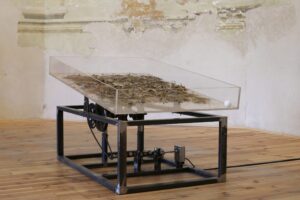 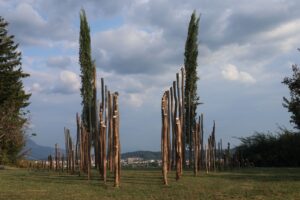 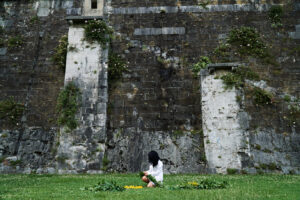 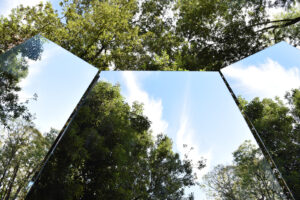 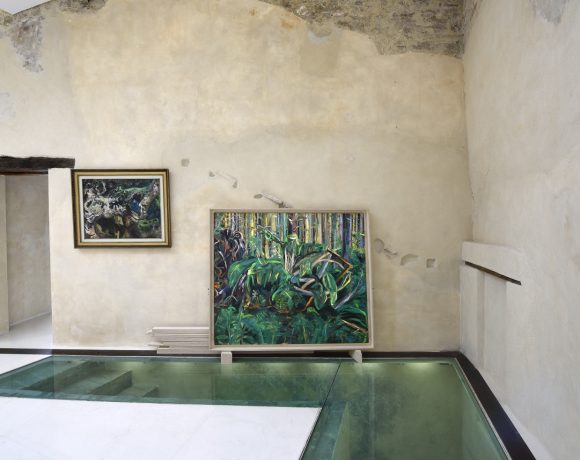