Nataša Kos. The soft and the i..

The person and the manifold conﬂictuality that it ...

The person and the manifold conﬂictuality that it embodies

In the church of San Giovanni Battista, in the heart of the historic center of Modena, on Friday 13th September, on the occasion of Festival della Filosoﬁa 2019, the exhibition “In the mind of the beholder. Memory, dignity and identity of everyday life “, curated by Marco Maria Coltellacci, Laura Solieri and Alessandro Mescoli and produced by the Archdiocese of Modena and Nonantola.

The exhibition, which can be visited every weekend until October 13th, brings together contemporary artists and masters of the past, such as Guido Mazzoni, around concepts such as corporeality, identity, humanity.

And it is precisely starting from the sculptural complex by Mazzoni himself, ” Lamentation over the dead Christ” (1476-79), that it is possible to introduce the person leading the entire exhibition. The person, the main theme of the festival, emerges here through the great realism with which the artist creates the ﬁgures, originally polychrome; and, in particular, their faces. Indeed, the physiognomic expression becomes the means by which it is possible to recognize each member of the Confraternity of St. John the Baptist.

It is no coincidence that the mask, theatrically used to focus the viewer’s attention on the actor’s face, is the primary meaning to which the etymological origin, both Greek and Latin, of the word person refers. In the theater as well as in art, it can have a dual function, instrumental and aesthetic.

On the one hand, the mask is the tool by which, as already underlined above, it strengthens the individual’s emotions, which can denote suffering, as happens in Mazzoni; or joy. This is the case of the sculptural work “Trentatré 1942-75” (2013) by Serena Zanardi in which the ten lined busts of women appear with plastic positions and smiles so dazzling as to question the very status of truth. It is as if for women, the smile becomes the dress to wear to hide their most authentic state of mind.

On the other hand, the mask is an instrument through which to carry out a dissolution of identity. In the sculptural couple by Andreas Senoner, “Mask (moulting)” and “Nest” (2018), the lack of a face guarantees a transformation and a regression of the subject, respectively, into a bird or a tree; moreover, the use of materials, such as wood or feathers, makes it possible to recover a purely natural dimension.

In the painting by Federica Poletti, “Luce” (2019), the decision to cover the woman’s face with a gold leaf coincides, instead, with the desire to focus the attention of the user on the body dimension and to prolong a fleeting moment of contact between mother and daughter.

Communication, at the base of every human relationship, is a recurring theme that the presented works seek to deepen through some of the main forms of expression.

The most common of these is language. Thus, the collective ZOOMWeg decided to collect the life experiences of the homeless of the Bethlehem hut and to let their words spread in the environment, without any material bond. Words are thus free to regain their fading, overcoming a dichotomy, often existing in the religious (and not only) sphere, between matter and transcendence. In fact, the body can often become a cage for the soul and this is what happens in Michelangelo Galliani‘s work where the title “The siege” (2012) alludes to this type of oppression.

This sculpture relates, from a constructive point of view, and is opposed, from a conceptual point of view, to that created by Marika Ricchi. In the marble work “In nomine patris” (2016) the matter dissolves; the feet remain, a portion of the bust and the crucifix of steel, mirror of the one placed on the altar of the church.

The crucifix, in addition to being one of the most used symbols in Christianity, also frequently returns to the artistic field. For example, the dissolution of the body by Marika Ricchi likewise returns in the sculpture by Luca Freschi, “Martyrium Sanctae Eulaliea Credo” (2013). In this way, a continuity is created between the works and the Church that hosts them; among contemporaries and masters of the past. 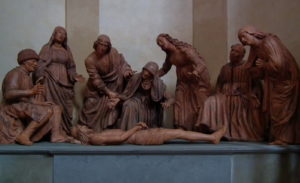 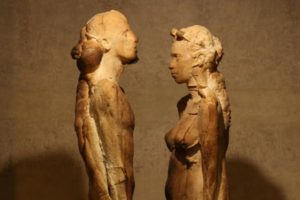 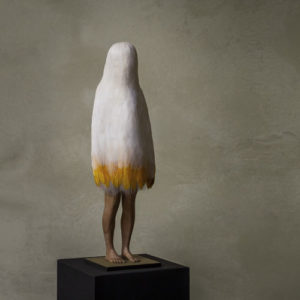