The total ecosystem by Quatrième Paysage at TIST a...

The starting point of the reflection are all those spaces that constitute a “territory of refuge for diversity”, as Gilles Clément writes in his Manifesto of the Third Landscape (2004): places where “abandonment and non-intervention turn out to be fertile processes favorable to the proliferation of biological diversity” – says the press release of the exhibition.

Elsewhere Here is the first solo show by Samir Sayed Abdellattef and Lucrezia Negrini in the name of (Quatrième Paysage duo) located in Bologna in two distinct spaces, namely TIST – This Is So Temporary (Rastignano) and Adiacenze, and held simultaneously, albeit for a few days, in their respective locations. The reasons for this choice are to be found in the configuration of the exhibition itself, made up of different and altogether complementary works, and in the desire to invert the prevailing paradigm that would see the center as the most important and most attractive area compared to the periphery.

On the other hand, this second reason opens the way to an equally relevant motivation, represented by the desire to “break the tight urban meshes [in order to] constitute a new territory for the diversity of the art system”. And there could not have been a better occasion to deepen such reasoning, considering the thinking behind Quatrième Paysage’s work: Elsewhere Here, in fact, emphasizes the deleterious management of the relationships between man, nature and objects due to the anthropocentric approach, by encouraging the creation of a total ecosystem in which not only human physical existence coexists harmoniously with the non-human one, but also the digital existence, that is, the one experienced online by millions of people.

The ingredients of these reflections have all been provided since the 2000s: from the risks highlighted by Paul Crutzen about the impact of human activities on the health of the terrestrial ecosystem – the new millennium had just begun – to the aforementioned Manifesto of the Third Landscape – small, but illuminating essay on a renewed way of understanding the coexistence between man and nature, also with a view to a more effective safeguard of the planet – up to the theory on Object-Oriented Ontology developed by Graham Harman starting from 1997 – resumed in ‘homonymous text published in 2018 – and to the closely connected one of the’ hyperobjects’, anticipated by Timothy Morton in the 2007 paper Ecology without Nature and deepened in the homonymous Hyperbojects (2013). The common denominator of all these studies is the urgency to take consciousness of the Anthropocene – a term used by Crutzen to define the era currently underway – and to think of a renewed interaction and perception of what surrounds us: plants, animals, inanimate objects, or, precisely, ‘hyperobjects’, such as “the biosphere or the solar system” (Morton, 2013).

The full title of the English version of Morton’s book is Hyperobjects. Philosophy and Ecology after the End of the World, and Quatrième Paysage’s reflections focus precisely on the last part of this construct, that is, on the provocative and enlightening announcement of an end of the world that has already occurred. This is what the Elsewhere Here exhibition refers to: a world considered ‘elsewhere’ by most of its inhabitants, but which is already here, around us. If the Elsewhere (2021) of the ‘silent’ installation placed in the external space of TIST refers to its completion on the occasion of the exhibition inaugurated by Adiacenze – “an eye and an ear that observe and memorize what is often overlooked” – the works Deprofundis (2021) and Leaves of Grass (2021) make it clear the need to reformulate the role of man within the biosphere: a protagonist like any other living or non-living entity, devoid of any degree of superiority, and an integral part of that biodiversity that it constantly analyzes and classifies in a detached way.

In the wake of the words of Gilles Clément and Timothy Morton, what Quatrième Paysage expresses is the perspective of a ‘fourth landscape’ in which even the digital becomes part of the flow that regulates diversity, thus abandoning the elsewhere than virtuality and giving life to a total ecosystem. 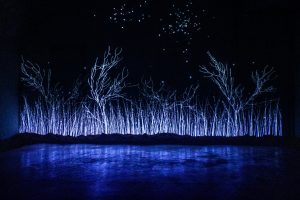 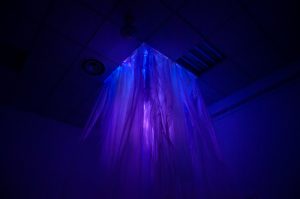 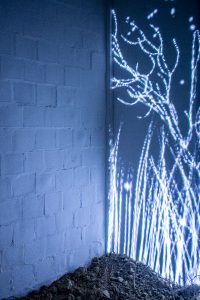