The total ecosystem by Quatriè..

With “Like They Were Eternal”, the Milanese artist Patrick Tuttofuoco (1976) inaugurates his second solo show at the Schiavo Zoppelli Gallery in Milan, presenting a body of works able to literally make vibrate those most intimate and hidden chords of human interiority. The exhibition centres around the intention of declining, through a personal and meditative key, a series of concepts which, on the contrary, have a character of total universality and all-encompassing such as space-time. Taking as a reference that line of scientific research aimed at undermining the concept of flat linearity associated with it, Tuttofuoco provides an artistic materialization of relativity and chaoticity instead attributed to the temporal dimension, in being purely in relation to the progressive existence of the individual. What he does is therefore a complete overturning, in a metaphorical sense, of the commonly understood temporal flow and, consequently, of the increasingly questionable rigid interpretation of binomials such as life-death and corporeality-spirituality.

The expedient employed to face a purpose that presents to all effects an incommensurable taste is that of memory, digging among the deepest lands of his person to bring out a ‘time’ that it is not simply past but where also present and future seem to intertwine in an endless circularity. It is another and suspended dimension that presents itself to the eyes of the visitor facing with an imposing photographic portrait on wallpaper depicting those who are and were the members of his family, separated into a multitude of posters – with a text by Umberto Sebastiano – that the visitor can choose to take away in an, at least apparent, sense of (indirect) involvement that has long represented a distinctive figure of Tuttofuoco’s work.

Going down into the main space, you are mesmerized by the cryptic “Freddy Boy”, an installation in which coloured neon lights define upside-down human figures in the air – a direct reference to the passage of souls from the kingdom of the living into the afterlife as described in the Book of the Dead (the Egyptian funerary text) – and inspired by the dead of a cousin of the artist himself. The work is therefore configured as a sort of passage portal between the earthly and the spiritual dimension, literally merging into an inseparable unicum in the eyes of the observer who remains almost a prisoner of this continuous alternation between an aura of sacredness (accentuated through the position of the work hanging like a religious icon) and corporeality given by the alternation of colored neon lights and delimiting concrete figures in an otherwise empty space.

And this perennial suggestion of overcoming any temporal constraint and immersion in another dimension is skillfully fed by the addition of the auditory stimulus. The space is in fact permeated by the soundtrack created by Nicola Ratti in collaboration with Umberto Sebastiano which, like a mantra, impresses itself by force in the mind of the observer through the phrase ‘Like they were eternal’. It is in fact repeated in a never-ending hypnotic loop through the voices of the artist’s relatives and friends going inevitably to increase in an exponential way the emotional charge with which one approaches the works. Then, there are the sculptures “No Space” and “No Time” with which Tuttofuoco reproduces his wife and child in a plastic embrace, exuding a much-needed sense of humanity and giving shape to a mixture of both a classic approach and of a marked modernity given by the use of materials and techniques such as methacrylate and 3D printing.

On the opposite wall, however, a clearer gesture emerges from the drawings from the “Like They Were Eternal” series surrounded by impressive mirrored frames where the viewer inevitably finds himself entangled in the intertwining of lines depicting the arms and hands’ movement. A motif echoing, in terms of colours and representation, both the “Freddy Boy” neon lights and the prints on mirror-polished steel of “Time Capsule” placed on the back walls. The movements of the wife and children’s arms are represented in a gesture which reproduces the circular sense that is the driving force behind the show. Once more, thanks to the reflective surfaces, the viewer seems to be part of these fragments of the artist’s life almost in an invitation to make them his/her own through an impulse in its interiority.

The impression is that Tuttofuoco crystallizes a flow of moments that start from the meanders of memory but which, in a game of overlapping and temporal limits overcoming, are definitively consecrated to the eternal. Automatically, the observer is induced to replicate the artist’s lesson in the same long and complex attempt to immortalize the multiplicity of pieces that make up the mosaic of one’s existence. Time and space, life and death lose their meaning in a suspended oasis where Sebastiano’s poetry, which will forever be memorabilia if you choose to bring the poster with you, simply transcribes everything in writing: “And our bodies, trembling, hold each other tight, and find comfort in love, and become full of light and fly away to the words sung by a poet”. 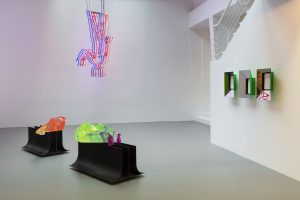 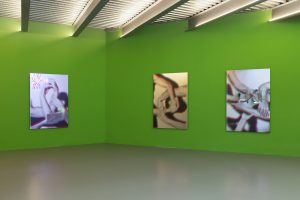 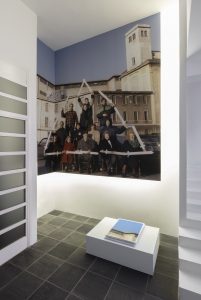