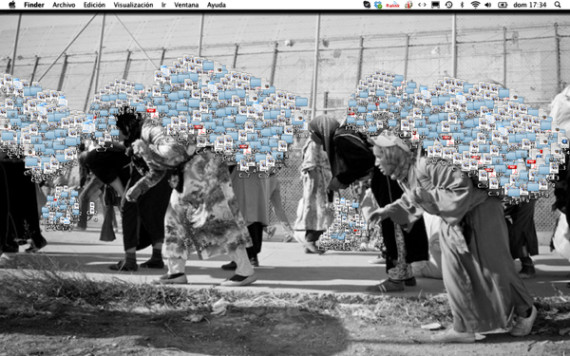 To deny, to corrode, to reformulate, to fragment and to redefine narratives about the past that helped to shape the officially recognized history, to rethink the concept of identity dismantling its artificial unique connotation in order to open on the incontrollable flow of plurality: this is the theme of the collective exhibition to Disconfirm, open until June 13 at Gallleriapiù in Bologna.

Through the works of César Escudero Andaluz, Matteo Guidi, Giuliana Racco, Amanda Gutiérrez and Massimo Ricciardo the exhibition is an opportunity for co-existence and comparison of different artistic practices, similar in order to reshuffle some visual and intellectuals hints of our contemporaneity by the exploration of its shadows and blacks holes. The artistic research is developed in its essential worthlessness as a free tool for analysis and criticism of the apparent granite certainties on which the cohabitation global is based, revealing its nature of arbitrary control device. Paraphrasing the stubborn project of Bartlebooth by Perec, the inextricable incoherence of the world can be enmeshed in endless and irreconcilable narratives born among temporary necessity ending in a final nowhere. Perhaps only the ductility of art can reflect the constitutive inconsistency and fragmentation of the commonly accepted assumptions about identity through a story always willing to deny itself and its assumptions.

César Escudero Andaluz from 2011 is a researcher at the University of Art in Linz in the laboratory of Interface Culture where he studies the relationship between users and interfaces: from the comparison between analogical and digital media that are measured with perceptual habits of contemporary the series Tapebook and File_món spread out. In the first one the artist using an audio program converts some texts taken from Facebook pages dedicated to thinkers and philosophers (like Lacan, Barthes, Foucault or McLuhan) in audio tracks poured on cassettes, each with a cover that mimics the graphics of the social network. In this sort of analogical archive of digital information the virtual material is conceptually flattened in one horizontal dimension, as the clutter of media intended to keep it and play it expands in three-dimensional sense, distorting its essence. File_món is a collection of frames where the computer screen is entirely occupied by a photographic image in black and white chosen among the most popular ones representing the highlights of the history and society; the original documentary value is distorted and reinterpreted by layering digital icons used as graphic elements that make up images replacement of some elements of the original shot. Short circuit conceptual is added by an intriguing hypothesis of reversibility of the most common categories of art that transforms the aseptic packaging of digital signs in the unexpected return of figuration.

The research of Giuliana Racco and Matteo Guidi develops itself in the intersection between art and cultural anthropology investigating the ways in which individuals from contexts of constraint (such as high-security prisons, factories and, more recently, refugee camps) run their daily actions activating ingenious methods of resistance to environmental difficulties that limit their freedom. The works on display reflect on the concepts of belonging, ownership and persistence of memory as a measure of distance that transcends geographic boundaries to inhabit the equally intricate topography of our cultural barriers. So for example the project In Between Camps documents a journey of three days made by the artists along the ruins of a Roman aqueduct that once carried to Jerusalem water that gushed from the pools of Suleiman near Bethlehem. Built by ancient colonizers, today the aqueduct connects two refugee camps across territories often forbidden to the original inhabitants and is used by locals as a marble quarry in the symbolic erosion of a past that may not feel they belong to.

The artistic practice of Massimo Ricciardo is focused on creating processes to achieve a sort of “living memory” that is inspired by the social relations of his family and enriched by the travel impressions acquired in the course of his adventurous wanderings to the world. In particular the works on display are focused on the period spent in Kashgar, the Chinese city of the autonomous province of Xinjiang, an historical crossroads of peoples along the Silk Road. The series of oil paintings entitled Expropriation presents the gashes of the historical Ottoman city centre demolished following a radical plan as a patent form of subjugation of the Uighurs, a local Turkmen minority with Muslim faith in opposition to the central government. The dripping matter that is deposited on the canvas seems to allude to the mud used to build the destroyed homes, whose wounds are highlighted by splashes of bright colors. The effacement of the memory thus turns into a powerful scream of color that amplifies its echo in a final attempt to deny the arbitrary denial. The installation Permanent Vacation, composed of temporary migrants’ couches made of traditional fabrics connoting the ethnicity of their owners, reworks insecurity and impoverishment of the identity in transit by comparing it with the fabric of power, an image of the bathrobe that Mao was wearing in some official portraits.

The video trilogy Time topographies by Amanda Gutiérrez concludes the exhibition with the polyphonic narrative of intertwined stories of clandestine migration accompanied by photographs of the places of landing of the immigrants-narrators. The voices-over tell the journey to the new home by giving their words to a person of a different age, ethnicity and gender: the alienation that results from this imperfect adherence to reality cools the emotional impact in an implicit criticism of the tone with which the media usually deal with these issues. The project reflects on the social, political and personal effects of migratory displacement and assumes a reinstatement of memory in relation to the space using the landscape as a starting point in the reconstruction of the displaced identity. 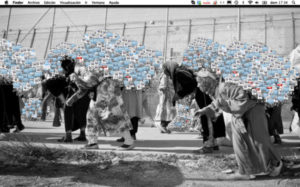 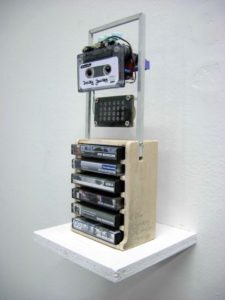 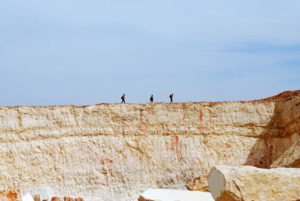 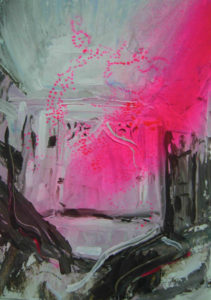 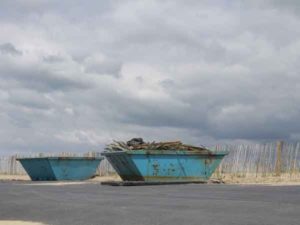