In conversation with Gian Mari..

The spell of Damien Meade at t..

Wallace Chan is an artist from Hong Kong who has always been dedicated to the making of jewellery, carving, and sculpture. In 1973 he began his career as a gem carver and he gained a worldwide recognition as the pioneer in the artistic use of titanium. He has been indeed the first Chinese jewellery artist to be exhibited at TEFAF in Maastricht and at the Biennale des Antiquaires in Paris. His works are held in the British Museum permanent collections (2019), in the Beijing Capital Museum (2010), and in the Ningbo Museum (2010).

Today, with Totem, the artist Wallace Chan wants to reconfirm his mastery in working with elements full of strength and character, such as titanium and iron. Really strong is also the title of the project, Totem, which conceptually refers to an idolized spirit. In anthropology “totem” is a natural or supernatural entity that has a symbolic meaning to which one feels connected for life; in this case, through this element, Chan tells us about his connection to Buddhism.

Speaking of which, the curator James Putnam states that “as the title suggests, this exhibition is connected to the fundamental principle of totemism, which defines the existence of a spiritual relationship between human beings and Mother Nature and, precisely by this relationship, it believes that it has to contribute to the sustenance of life. The calm and enigmatic face of Chan’s sculpture results in a form of mystical spirit, a sort of totem that expresses the transcendental state of absolute unity”.

Totem is a large-scale installation made up of multiple elements that are part of a single titanium sculpture. Titanium is a futuristic material, of the space age, that takes its name from the immortal “Titans” of Greek mythology and it is by far the most resistant but also the lightest metal. The site-specific installation also contains some iron elements, a material that, unlike the first one, changes over time.

The sculpture entitled A Dialogue Between Materials and Time, Titans XIV, originally ten meters long, is now arranged on the entire floor of the exhibition venue, almost as if a large mountain had exploded into a thousand pieces creating loads of small rocks with all its lapilli. The single work almost no longer exists, the multiple pieces now live independently. The power of the material and the might of the installation begins to crumble easily and then a real disintegration of the object takes place as an end in itself. The work begins to live in a total and totalitarian way from the moment it breaks down and only comes to life when it becomes fragile.

Wallace Chan, through this project, wants to express the social fragmentation and uncertainty of the world, linked to extremist political issues as well as to the effects of climate change that today predict a weak and uncertain world.

The installation consisting of iron and titanium elements (including abstract shapes and elongated heads) calls the user to explore every corner of the space, every perspective, every point of view both of creation and, conceptually, of the global view. The “exploded” sculpture intrigues the visitor who is invited to put the pieces together like a puzzle to be built and tries to understand the right direction of things.

The artist exhibits a dematerialization of the work in order to invoke a solution given by the observer. However, he is aware that the rearrangement of the individual fragments and the global balance of the world, unfortunately, will never be fulfilled.

The elongated titanium faces of various sizes open up like windows on the unconscious, and open views beyond the physical existence itself to reach a spiritual part; like a reliquary where elements to be idolized are kept, the viewer enriches the work through his view, like an ornament of considerable value.

In fact, Chan wants precisely that we immerse ourselves in this new “hypothetical world” which we have to elaborate, recompose, and build through our moods, our experience, our own need for expression, etc. 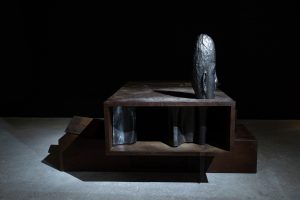