Tracey Snelling. The world as a polyphonic condomi...

Tracey Snelling. The world as a polyphonic condominium

It certainly happened to everyone, during a night walk in the city, to surprise through the illuminated windows of some dwelling a fragment of a domestic scene capable of igniting imagination and curiosity. This instinctive voyeurism, which arises from the impulsive human attraction for what is perceived as secret and from the contemporary habit of identifying a luminous surface as a screen, is at the origin of the suggestive installations by Tracey Snelling (born in Oakland, California in 1970. Lives and works between Berlin and the United States). The artist, using sculpture, audio, video and installation, recreates on a reduced scale environments and buildings inspired by the impressions of places she really experienced during her travels around the world. Her goal is not to produce a miniature replica of the real, but to build narratives that, by mixing real and fictitious elements, explore the culture of the represented place while at the same time leaving great freedom to the imagination of the viewer.

The scenes that take place behind the windows of the buildings, which are from time to time mysterious, erotic, paradoxical or simply banal, invite the viewer to ask: Who lives here? What do they do and why? These questions carry the observation into the realm of narration and from there to the anthropological and sociological investigation. Walking through unfamiliar streets and trying to dress and behave as she you belonged to it, the artist is able to observe in detail the interactions and everyday events of the people who live and work in the places where she is camouflaged. Her intent is to understand the similarities and differences in the way each of us handles the human condition, focusing her interest on exploring little-known aspects and heterodox perspectives. In her installations, often ethically committed to denouncing the inequality of world wealth, her individual ideas and impressions come into play, and it is this indissoluble fusion of the known and the unknown, the stranger and the familiar that makes her job so engaging and varied. The Metropolis exhibition, which can be visited at Studio la Città until April 13th, brings together a series of recent works by the American artist that compose an evocative “tour of the world in a room”.

The most impressive work is Tenement Rising (2016), an agglomeration of condominiums 3 meters high that frontally looks like an overwhelming wall of cement and plaster; the monumental façade is enlivened by a swarm of small lights, images and videos that can be seen through the dirty and closed windows. The work, made with materials and craft techniques in symbiosis with simple technological insertions, alludes to the problems of overpopulation, crowding and poverty in the big cities. The architectural structure of the complex, ambiguous between the ephemeral apparatus and the eco-monster, is inspired by the recent Beijing urban revolution, where every day the ancient hutongs (popular neighborhoods formed by rows of siheyuan, the traditional courtyard houses) are demolished to make space for huge apartment complexes built to accommodate off-site workers. These constructions soon become dilapidated due to poor materials and approximate construction practices, they are unsafe, overpopulated and lacking in hygiene and safety standards. The open structure of the installation invites the visitor to go around the wall and discover the scenic artifacts left in view on the back: lights, media players, screens, transformers, Polaroids, adhesive tape and wood. This interweaving of threads, raw materials and electronics recalls the artisan initiative of those who live in poor situations who manage to make up for the lack of services with empirical methods, generating a vulnerable organized disorder. In videos and images shown in windows and doors, people struggle to survive, work hard or look for food or recyclable materials; sometimes they take drugs to try to mentally escape from their situation or are victims of domestic abuse, while sometimes they seek refuge in religious or superstitious practices.

More cinematic, the Serial Killer Room, Fantasy Mirror Room, Club (2018) installation consists of three rooms that scan the feeling of desire. The first represents the desire chamber of a serial killer; in the small lcd screen three different videos are reproduced: the first taken from the film “The silence of the innocents”, the second takes up a misogynist priest, the third shows the famous American murderer Ted Bundy who talks about women. The second room is filled with an accumulation of kitsch objects and idols, while the latter depicts a Berlin club, conceived as a synthesis of several pubs visited by the artist.

In Green bar (2016) instead Tracey Snelling represents her version of an old bar in Berlin: in the video in the background window the observer can see Charlotte Moorman and Nam June Paik, pioneers of performance and video art, engaged in an action music session in a street of the German capital, while the background music is an excerpt from Axel Thesleff’s “Bad Karma”.

Another extremely iconic work is Flaghouse room # 2 (2016), which recalls the interior of a house painted with the American flag theme that the artist had seen near Albuquerque. In this case, setting elements with a strong symbolic value and identifying American culture in a dirty and squalid context, the artist places the accent on the contrast between appearance and reality that constitutes the background of every official representation.

With a more literary stamp, Rainy Night (2013) is based on the poem “As one listens to the rain” by Octavio Paz (some verses of which are also reported next to the sculpture). From the windows of the second floor of an old building, one can see a video taken from an anonymous film where a model dances, almost like a muse of the artist. The background song is taken from the 1981 French film “Diva” directed by Jean-Jacques Beineix. 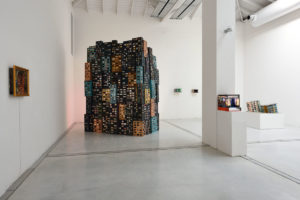 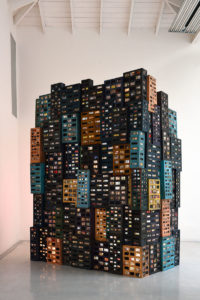 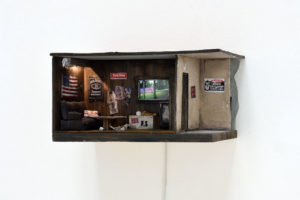 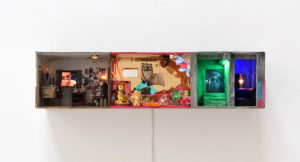