Tracey Snelling. The world as ..

How do you feel about art as another commodity?
Well, it’s really hard, I mean I think it’s happening regionally, in Singapore where there’s money going into community projects, and people see it as a commodity, an investment. It’s not like in the west, where art’s seen as a form of resistance, a political voice, a way to bring communities together.

In terms of transformation, artists are often compared to shamans – do you have any time for that?
I was interested in a few architects taking up that role, and there’s a lot practising in London and New York; and Joseph Beuys was one of them. I think he was conscious of the persona that he had created; I mean he dressed in a certain way, used certain types of materials and natural energies. I think art has a role in healing; and I’ve been looking up how artists look at that. One of them is Josh Faught, an artist based in San Francisco; he’s a queer artist; he uses this textile weaving as a way to sort of stitch…deal with traumas. He’s looking at how art can get through traumatic experience.

What is it to be anti-monumental?
I used that term in relation to sculpture and public art. I think that in the art market everything has to be big to capture the audience’s attention; it becomes a huge spectacle, like a marketing gimmick, and I mean sculpture doesn’t need to be huge all the time.

How do you feel about art as a replacement for religion?
I’m not a deeply religious person. Art replacing spirituality, I guess, maybe not religion.

Do you think a lot of art is seeking acceptance?
Showing art, exhibiting, is always a public discussion, and it’s also nice to bring these topics out into the public.

Living in two cultures: a foot in both, or belonging nowhere?
I know KL, Singapore and London, and I feel very comfortable showing, I have friends in the arts scene, and that’s because of years of working on projects, and spending time in those countries exhibiting; but I am a Malaysian artist, and I’m aware of the context my work comes from.

Is it your duty to address social issues?
A little bit, yeah. When I first came back from London, I felt slightly responsible, that I needed to contextualise or anchor my work to Malaysia, which now I feel it could be kind of forced on, but I feel I need to see if I do need it, and whether that’s urgent enough.

Do you have unexpected sources of inspiration?
I have interesting ideas when I’m on the bus or the train, or on a plane. It’s also not just zoning out; I call it constructive daydreaming. It’s actively thinking about something, picturing a work in your head, but it’s an active thing. It’s not just going with the flow. In the studio, if I feel a bit stuck or not knowing what to do, I sweep the floor. It cleans the space, but the movement is a nice bodily activity. It’s a repetitive gesture, working the space, but it does help.

Is there something the world should see in your work that perhaps isn’t obvious?
For artists it’s quite hard… the most important words, or language, I think are in the titles of the works. But I tend not to overthink it, and overwork it, ‘cause I think the work should just be able to exist on its own as well. I like some of my titles, I think it works for certain words.

You’re due to talk at the Public Sculpture Symposium at the Royal College in London this year; is that scary?
Yeah, very; it’s a prestigious university, and I’m like a child; I’m a kid in the art world, so I still have a long way to go. If I think about it, I’ve only done it full-time for two years. It’s very scary. I feel inexperienced, and I feel like I need to learn more when I’m in London.

What would you say to the very young Haffendi?
You should not do art to make money or become famous; I think you have to have an idea, and a belief, of why you want to do this. You should be clear and very honest, and sort of appreciate that, to voice out something, to change something; it’s really important. I’ve seen artists just making work to sell at exhibitions; there’s no meaning to that, it’s like a business. No, you’re an artist, you’re supposed to make sense of this time, and fight for something. 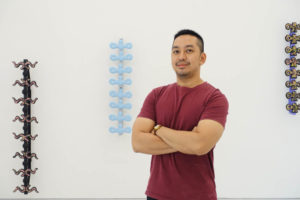 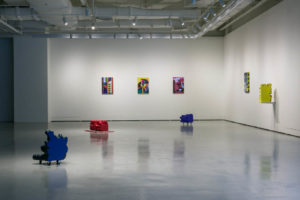 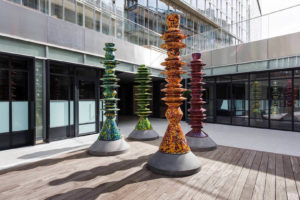 is a Liverpool-Irish copy-editor and writer living in Malaysia, with book reviews and artist interviews in national newspaper The Star. His poetry has earned praise from Ted Hughes and others, having reached BBC radio and magazine audiences. As Kwailo Lumpur he writes comic material about Malaysian life. Three books of his poetry are due out soon.