In conversation with Sheida So..

The Yag Garage gallery in Pescara opened on Saturday, May 7 the exhibition Transiti | sul filo dell’infinito, with shots by Stefano Fontebasso De Martino, curated by Ivan D’Alberto. Stefano Fontebasso, mainly based in the capital with exhibitions, editions and collaborations, worked for a period as a photographer at the Attico gallery in Rome, a place full of inputs in which many encounters have been fundamental in order to build an archive of memories, then carried out during the time. The show displays a free vision through the lives of a series of contemporary artists, who are portrayed using two different media, image and text. For each subject there is a plural portrait, which allows to highlight inclinations and specificity, also revealing new features.

In Transiti, the selection of photographic material is linked to the objective of recomposing a puzzle, that developed over several decades in the Abruzzo area, and that has firmed over the years, creating like an artistic fabric. The set up includes important national and international figures, who for various reasons have established a link with this territory, such as Emilio Vedova, Michelangelo Pistoletto, Vettor Pisani, Cesare Pietroiusti, Luca Maria Patella, Luigi Ontani, Piero Pizzi Cannella, Joseph Beuys and others. Among these also appear Mario Ceroli and Nunzio, born in Abruzzo but who have often been out of the region to work. Associations and friendships have intertwined the life events of artists with those of leading operators in the regional cultural context, determining its growth, and creating projects that have left an important echo in later times. The authors are all displayed with shots that capture them in moments of action, thought, research and processing, for example in the studio as Enzo Cucchi, Nunzio and Piero Pizzi Cannella, during a performance as Cesare Pietroiusti, or together with works such as Luigi Ontani and Hidetoshi Nagasawa.

Their expressions of concentration and their gaze can hide ideas and wills, which perhaps only a few have known or revealed. Stefano Fontebasso manages to suggest in a veiled, but present, way what is enclosed in the creative process of the artists, capturing certain moments that underline a mistery and complexity, but also the stability over time, as their gestures and research will remain impressed in the history of art. To accompany these images there are short texts, stories and anecdotes of some characters, who met the artists during their transit in Abruzzo, remembering specific episodes. The words they use to describe them in their daily lives emphasize aspects of character and approaches to situations, helping to contextualize their iconic figures and, probably, to smite them.

Franco Summa recalls, for example, the surprise of Emilio Vedova in knowing the new artistic realities of Pescara in 1965, stopping in the city during a trip to south Italy, and appreciating the work of the newborn Galleria 3. Marcella Russo recalls the summers of freedom that Enzo Cucchi spent in Francavilla al Mare, humming while returning home in the evening after a day at the beach. Alberto Trivilino recounts the funny temperament of Loreta, the parrot of Jannis Kounellis, perched in the courtyard of his Casone, and on display at the Galleria l’Attico, and it also enthusiastically replied to Giulio Carlo Argan. Gino De Dominicis instead involved in a gastronomic joke Joseph Kosuth: he invited him to the restaurant offering him a conceptual and empty plate, while he was looking for a more concrete pasta with tomato.

The close-ups and interiors collected in the exhibition dialogue with each other but without imposing a precise trend: suspended in space like eternal memories, they give the visitor the opportunity to create a personal album, trying to read in the faces suggestions and torments of mind. 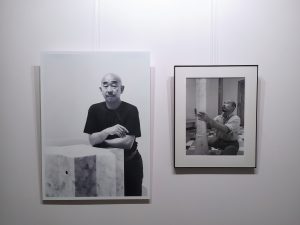 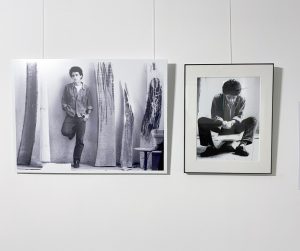 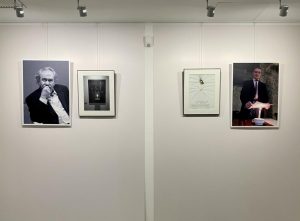