In the exhibition catalogue, Yan Blusseau, refers to the Myth of Sisyphus by Albert Camus to present the work of Vincenzo Veccahiarino. In the Myth of Sisyphus, Camus aims at showing that even the obscure doctrine of existentialism contains traces of hope. Sisyphus, denying any form of transcendence, accepts the absurdity of his condition and frees himself from the question “why” by finding freedom and happiness in the difficulties of his efforts, in his own struggle. “Even a fight for the top is enough to fill a man’s heart. We have to imagine a happy Sisyphus.” Vecchiarino’s oeuvre is based, in fact, on the idea of ​​existential anguish, primordial suffering: the absurd condition of a so small Man in such a big reality. Simply a mortal in an eternal universe. This thinking can be the starting point for the interpretation of the works by Vincenzo Vecchiarino, an artist from Puglia who, trained at the Florentine Academy, did not live enough to see the fame and recognition that he undoubtedly deserves.

In his atelier, placed in via Romana, in Florence, Vecchiarino experimented daily thanks to the ink of the countless worn ballpoint Bic pens, and the different types of porosity of paper, producing thousands of abstract drawings full of the details of biomorphic and almost anthropomorphic shapes with a hyper-realistic accent (Untitled, Biro pen on paper, 2005 ca.), which give the viewer the impression of investigating internal organs (Untitled, 2009 ca.), or the fantasy of the inside of the eye (Untitled, 2010 ca.) by Vecchiarino. These numerous ballpoint pen drawings depict a hidden guide to the artist’s inner world and present all the ideas that later will be realized in his most important oil paintings.

Vincenzo devoted much of his work to pen and oil. However, his works have been hidden for decades in family archives, but now, for the first time, they are finally on display to the public at the B.east Gallery in Florence, which has recently inaugurated the artist’s posthumous exhibition: “Visibilium Omnium et Invisibilium”.

For the realization of the pen drawings, he maniacally focused on the study of pressure, direction, thickness of the tip and diameter of the sphere, color, rotation and length of the stroke, creating works that he used as study of the shapes and dynamics of the oil paintings. oil. The gallery owner and curator of the exhibition, Yan Blusseau, admits that Vecchiarino’s devotion to drawing was total. Part of the artist’s practice was the attention to the smallest details and a conscious strategy of dedicating himself to the creative, persistent and conscientious artistic process.

His ambition to embrace the concept of finitude and infinity is evident in his oil painting Battaglia blu (1984), in which it is clear the artist’s ability to represent what is invisible, to combine at the same level the details with what is blurry, creating a uniform look. In the painting, thousands of knights huddled in white coils and biomorphic forms pass through fog storms in which bodies and slender silhouettes accumulate and seem to come directly from the artist’s subconscious. The point and the rigor of the details are clear, amalgamating as a whole in a dense and blurred multiplicity, creating scattered forms between abstraction and figuration. All of this is linked to Vecchiarino’s founding reflections, according to which a point always corresponds to a set of potential things that are infinite, given the immensity of the infinite understood as a space of unpredictable possibilities. It can range from fluid figuration to abstract art, sometimes with elements of hyperrealism. Battaglia Blu shows a clear link with Cavalieri dell’Apocalisse, oil on canvas painted in 2007-2009. Perfectly modeled faces join with others faintly presented, with figures emerging from the abyss, from the magma of the shapes and the sculpted organic materials. Vincenzo seems to mix order and aesthetics with his conditions, constructing the pictorial field freely and carefully, separating the space to combine figurative and abstract elements. The lower layer in shades of green and brown gives the effect of an organic (hyper-realistic) earthiness, which leads the viewer to the impression of a digital manipulation. Earth is separated from the sky by a thick layer of cosmic white dust that appears to be composed of small organic fragments that penetrate the purple shade of the sky. As in other pieces by Vecchiarino, no element of the pictorial field is casual, but everything responds to a conscious choice and to the reference point of the artist’s spiritualistic universe, rich in meanings, marked by numerous reflections on the unsurpassed concept of infinity and references to ancient beliefs, Jewish Kabbalah, esoteric elements, but also modern psychoanalysis. All of this, step by step, had been carefully documented by him and placed in the annals of his archives. “The artist has the ability to speak in different languages, but his thought remains unique and his voice unmistakable”, wrote Vecchiarino in his notebooks.

Observing his works, it can be said that the artist’s intention was to remain in an ambiguous interpretative suspension. In abstract painting, the artist seems to devote himself to the study of the structure of organic matter on the surface of the earth, from which elaborate interweaving, complicated scrolls and crumbs of shapes – similar to neural networks, illuminated here and there by chiaroscuro – emerge. These surfaces sometimes look as if they were inhabited by half-living organisms, bacteria, sometimes in the form of oval and shiny spheres from another world (Untitled – “Terra egizia”, 1987-1989).

In this way, within a few years, Vincenzo does not hesitate to create stylistically distant images, invoking the possibility of a free choice of the technique and expression, intertwining abstraction and figuration. The artist noted in his notes his own work ethic, according to which one can speak different languages, experiment with different forms of expression, mixing them alternately, but remaining unshakable and consistent with his own vision, so that his own voice and expression remain unmistakable with anything else. 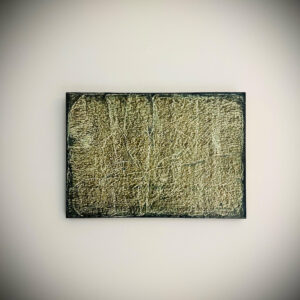 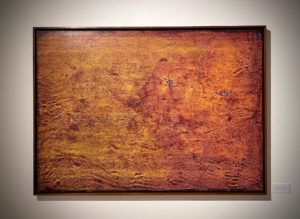 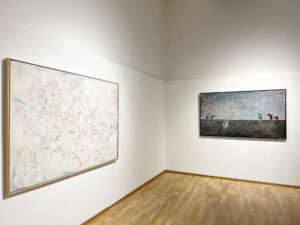 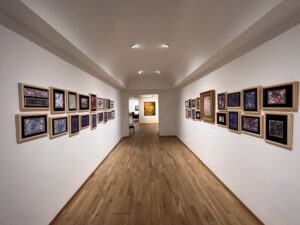 Born in Poznan, graduated in Performance Studies from the Jagiellonian University of Krakow. She is enrolled in the two-year course of Artistic Curating at the Academy of Fine Arts in Florence. In her research she focuses on institutional and decolonial art criticism, on the ecofeminist and performative vision of culture and art in ecological crisis.