It is a well established fact that our present is strictly hinged on a globalized system, the functioning of which is supported by economic and social processes that influence individual habits, expectations and decisions at all latitudes, insinuating themselves with an invisible hand right into intimacy of the private sphere. The utopia of technology aimed at alleviating the daily fatigue of human beings is no longer even on the horizon of our imagination and we are all aware that our role within the global economy is to be, alternatively, producers and consumers of tangible and intangible goods that our work helps to increase. Instantness, efficiency and optimization are the key values ​​that contemporary existence borrows from telematic systems, whose interference in governing men and things from above is increasingly evident. The uninterrupted circulation of goods, data and people seems to be attributable more to the maintenance of the globalized network as a whole than to the real need for each single movement, while the substantial systemic homologation of these three “categories in transit” is at the origin of macroscopic dissonances , such as the contrast between the ever faster traffic of goods produced in developing countries and destined for the rich hemisphere of the world and the slow migrations of the losers of the capitalist system, whose journey is slowed down by physical and bureaucratic barriers erected to maintain their condition of marginality.

Many artists today deepen these dynamics and detect the underground (and often hidden) reasons that determine them, sometimes incorporating in their work real social and political inquiries. The exploration of the effects of globalization on daily life, with particular attention to issues of class, gender, cultural hegemony and gentrification, is also at the center of the production of Débora Delmar (1986, Mexico City, currently living in London), to which GALLLERIAPIÙ dedicates the second solo show, entitled Liberty. The peculiarity of her approach with respect to the aforementioned trend, is that of constructing conceptual settings through unstructured and decontextualized fragments of reality, whose syntactic dissemination show not so much the accuracy of a thesis in relation to a specific socio-economic or political problem, as well as the unavoidability of certain interconnections which, despite being potentially obvious to a simple observation, are often not perceived. That of Débora Delmar is a practice of poetic observation rigorously conducted on the thread of minimal intervention (her artworks in most cases are withdrawals from reality or unmodified online purchases) that manages to keep the ranks of even very complex themes without ever getting lost in the network of connections put in place, which almost prodigiously transform evanescence into evidence. With this procedure, the artist, while avoiding expressing an ideologically aligned position, manages to resonate a denunciation message which is more explicit than any programmatic manifesto, whose credibility is confirmed precisely by the decision to minimize the manipulation of materials, intended both as objects and both as data.

The title of the exhibition at GALLLERIAPIÙ derives from the homonymous London department store of luxury goods, opened in 1875 in the wake of William Morris’s Arts and Craft Movement, with which the founder Arthur Lasenby Liberty shared the intention to stop the collapse quality of everyday objects determined by the increasing standardization of production. Unlike Morris, the entrepreneur, who initially specialized in the sale of oriental imported ornaments, fabrics and art objects, had sensed that industrial mechanization could be put at the service of aesthetics and convinced some far-sighted industrialists to produce in series of traditionally hand-made fabrics, thus managing to combine the decrease in prices for the consumer with the high quality of the product. In this story, which started a trend destined to spread internationally, Débora Delmar sees a foreshadowing of the current phenomenon of artistic globalization, in turn a pretext to observe how goods move today in the market between East and West in the absence of a unique centralizing fulcrum as London could have been at the end of the 18th century. The Roses wallpaper refers directly to the London department store, which covers the corridor that leads to the second room of the gallery and reiterates in a redundant and exaggerated way a detail of one of the most famous fabrics of the English brand, still in production, photographed by the artist in the current Liberty’s store. The installation reminds us how the floral style was the first to translate the concept of art into an enlarged field through decoration, thus anticipating the concept of design (now widely abused) and at the same time clearing the idea of ​​serial production applied to artistic creation, with the consequence of establishing previously unthinkable analogies between the market of consumer products and that of art objects. This intersection of implications is emphasized by the Roses triptych that we encounter beyond the corridor, where the same image, this time printed in three copies on a mirrored aluminum plate, is proposed as art in its most canonical meaning.

If in the Roses fabric an oriental-inspired motif had been imported and standardized in the West, in the sculptural triptych Residence we see the results of a similar process materialize according to a reverse trade route. Each of the three sculptures is composed by a different model of a London country-style toy house (produced by the Japanese brand Sylvanian Families) surrounded by real metal fences, also easily available products purchased on Amazon by the artist, a choice that reaffirms how in her view art should be the mirror of the time we live in. The gates are disturbingly oversized compared to the small plastic houses, whose seriality refers to the housing homologation of certain residential neighborhoods, emphasizing how easily the concept of protection crosses the idea of ​​separation and lack of communication between categories of people artificially created by social massification. These intuitions show how the globalized society has opened many doors, but at the same time has created as many segregations by subjugating people and things to similar mechanisms, which for the former are often even more coercive.

The first part of the exhibition is linked to this reflection, in which Débora Delmar conceptualizes her biographical story as a Mexican citizen domiciled in London, required to prove her status over the years through specific documentation to obtain permanent residence in the United Kingdom. After covering the windows of the gallery with a reflective film, usually present in government or high-finance districts to ensure the highest level of privacy, the artist placed in the room four lamps with house numbers, corresponding to those of the houses in which she lived in London, in turn protected by plexiglass cases. The extrapolation of the house number as proof of her right of global citizenship alludes on the one hand to the dynamics of the real estate market and to the existential precariousness they induce (she herself was forced to move several times because the apartment in which she resided had to be sold) and on the other, it suggests broader questions about life in the globalized world. Are we really world citizens if such citizenship must be guaranteed by a set of numbers and data? Why does the right to privacy, if we talk about individuals, belong only to those who have nothing to hide with respect to the standards of the system, while for corporations it seems to be the more defended the more the business is at the limit of the rules? 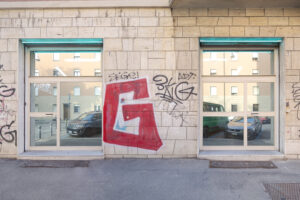 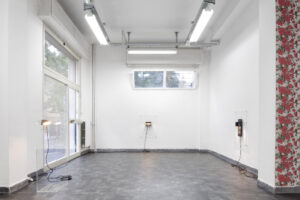 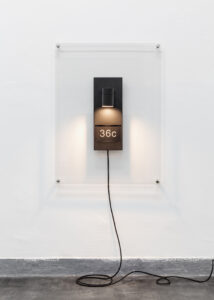 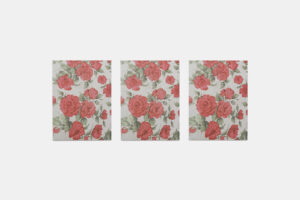 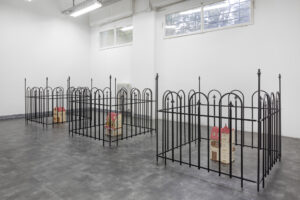