Imbroglio (or the ability to i..

At the Barbican Center in London, until August 26th, we will ask ourselves what it means to be human today, in a historical moment in which technology advances towards ever wider frontiers. This will take place thanks to the “AI: More than Human” exhibition-event, in which not only artists and curators are involved, but also technical partners such as IBM, Google Arts & Culture and Sony.

This is a trend in constant evolution as, until recently, the exhibitions in which art and science were intertwined, were not displayed in the most important galleries, but among niche circuits such as the Ars Electronica festival in Linz, Austria. They are undoubtedly themes that are fashionable, a trend that even the panorama of contemporary art institutions has begun to follow.

Developed in four areas, in “AI: More than Human” there is also a historical section, which creates a path from the past to the present day, to demonstrate the fact that these innovations and technological advances do not fall from the sky, they are not a pre-packaged from the 2000s. To cite a well known example also thanks to the large screen, it is sufficient to recall the first experiments with the machines carried out by Alan Turing. Art presents itself in London under its most disparate facets, moving from design to music and the fashion area.

The sections, which examine different aspects of Artificial Intelligence, are the following:

It is also important to remember how artists are now in fact true creators of new media, which come to light thanks to the inspiration drawn from technologies present in our daily life, such as Google Street View.

Not only society, therefore, but also those who are an integral part of it, as artists, can no longer ignore the fundamental and radical changes that new technologies such as artificial intelligence are bringing to our daily lives.

In my opinion the work Co(AI)xistence by the artist Justine Emard takes on an emblematic importance. The video of this installation plunges the viewer into a space-other, an alternative dimension: one remains in fact without words in observing the stupor painted on the face of the artificial alter-ego in observing the dance of lights performed by the Japanese actor and dancer Mirai Moriyama, a real and human astonishment similar to that of a child facing a reality that savors for the first time in his life. 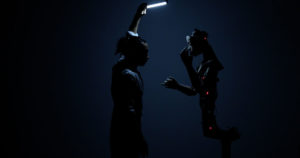 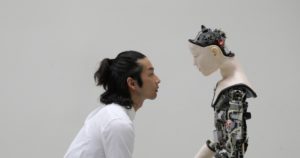 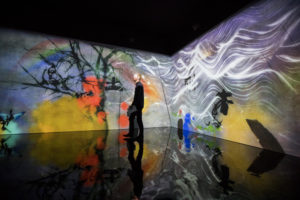 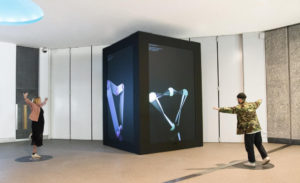 For all the images: AI: More than Human, installation view at Barbican Centre, London