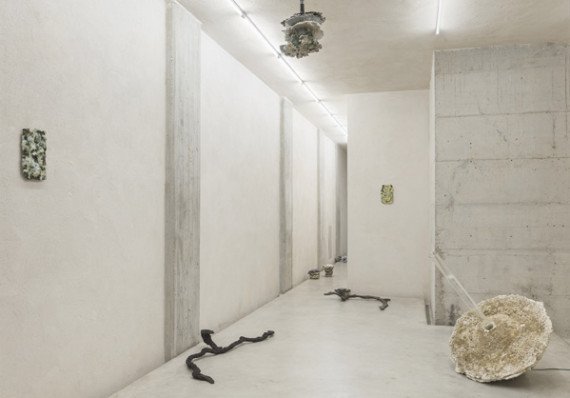 CAR DRDE is pleased to present Eocene, solo exhibition by Alberto Scodro (Marostica, 1984), sculptor and environmental artist who lives and works between Vicenza and Brussels. His research stems from the desire to test space and matter exasperating  their internal and latent tensions through transformations triggered by various energetic exchanges. By mastering a wide range of materials and their properties, Scodro makes natural and artificial substances interact with each other to form composite dynamic systems in close relationship with the environment that hosts or inspires them. Each work is the result of a process that distorts the apparent stillness of the initial constituent elements through a series of physical, alchemical or conceptual changes in state which are as many stages of gestation of a new visible form. The artist, fascinated by the unpredictability of the final result, lives the sculptural practice as a waiting for a unique and unrepeatable emergence which bring to light what is underground and inherent in matter. He associates the fluid status of incandescent material to the luminous manifestation of all their possibilities and the subsequent solid combinations to the secret strength that delivers their potential intact to the future.

His free and experimental approach follows the progress of the balances that govern the natural settling of materials and proceeds in a suggestive analogy with the geological evolution that led to the current structure of our planet and the mysterious vitality of the underground that still enlivens its surface. Eocene, the geological era in which in which the main mountain ranges arose and the first modern mammals appeared thanks to the uniform and sudden global warming, is also the mythical time of a sculpture that exists prior to man and embodies a kind of backwards metaphor of his inventiveness. For this reason Scodro, paraphrasing the Greek etymology of the word which gives name to the exhibition, conceives a setting-incubator that combine primordial suggestions and contemporary residues as in a new dawn of creation.

The earth element is represented by sculptures of the Mole series, resin and bronze casts of the underground dens of moles, which are branched architecture conceived in the dark by a blind architect whose operating mode draws the artist’s instinctive confidence in the matter that he manipulates. The exhumation of the submerged tunnels counterpoints to the  indication of a hypothetical pipeline smoke that pierces the ceiling to let out Untitled (Chimney Brush), a chimney sweep scraper transformed by casting into a repository of mineral concretions. Its presence, duplicated by a twin brush freely traveling in the gallery spaces, strengthens the homology between heaven and earth evoked by the set in ironic similarity with the esoteric motto “as above so below, as within so without.”Earth and water, full and empty return with Sailing on the ground, an enigmatic fount made of two opposed cones which are taken from the cast of a hole and the land mass resulting from the extraction in the middle of which springs an artificial source of recirculation in a double allusion to a circular motion endlessly returning on itself.

The passage of time, implicit in the transformation and transition processes that underpin the poetry of Scodro, is also suggested by the sculptures of the Spring, Autumn and Winter series which derive their name from the season when they are made. The protagonist of these mergers in which the metal base plate is added with mineral dust, oxides and ceramic colors is the surface that catalyzes the meeting/collosion between the materials and their respective voltages: rough, rugged, porous, brittle, volcanic and chromatically refined, when viewed from above it seems to simulate the geologic motions of an unexplored continent, while in detail it evokes the texture of coral or other elementary organisms. At the conclusion of the alchemic processing path that is the main theme of the exhibition we find Spiga d’orata, a Dadaist hybrid born from the improbable union between an ear of corn and a fish bone in a gold leaf cast. Mythological fossil generated by the convergence of an invisible linguistic process and a real cast of concrete elements, it solves the ideal progression of matter resulted from the darker depths of the earth in the sign of absolute preciousness and demonstrates the equivalence and the complementary nature of each type of action that contributes to the realization of the final product.

By assimilating human activity, specifically the sculpture, to the workings of nature that constantly creates without discarding anything, the artist in his crucible amalgamates raw materials, words, sands, minerals and unused everyday objects in a radical verification of postulate “what resists continues to exist, the rest evaporates and becomes invisible part of the context in which the sculpture originated.”So the art work, a provisional aggregation of force and matter, finds its more deep raison for being in the constitutive predisposition to follow the cycle of life and history without ever being able to consider fully accomplished. 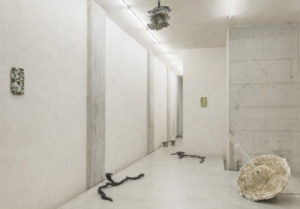 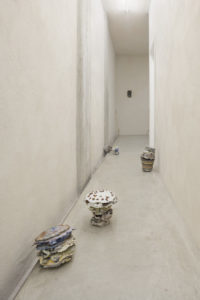 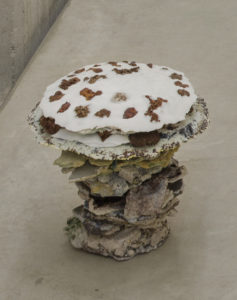 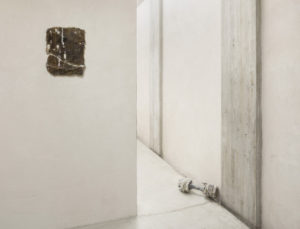