On Saturday 11th October, in the historical center of Reggio Emilia, Beyond the Border started, a collective exhibition project conceived by two young curators, Giulia Daolio and Domenico Russo. The exhibition included four solo shows: Tension Lines by Erjon Nzeraj and Valentina Scaletti, Gangnam Night Tales by Antonio Cavicchioni, Nomads Fermo by Angelo Massaro and Heart of Gold by Felix Curto. The artists on show, who come from different cultural contexts, have been called to reflect on the issue of emigration, as an important social phenomenon of our time, capable of producing changes between social and geographical boundaries. A process of mobilization and aggregation, which in addition to unveiling territorial demarcations, makes us reflect on the weak boundaries of identity, uncertain feelings, night shadows that sometimes seem to merge with the light of day. Feeling at home all over the world, despite having no home anywhere, can result in painful time, but an anonymous perpetual wander creates positive differences, both spatial and relational.

The Beyond the Border project has developed into two different processing stages. At first, in a space in Viale Allegri 6, each artist presented an unprecedented series on a rotating basis for ten days on the theme of the exhibition. The artists have created a dynamic exhibition space, trying to integrate, based on their specific skills, with methodological practices of identity affirmation, typical of society and the art world. Erion Nazeraj and Valentina Scaletti have combined their different experiences on the Lines of Tension project. Imagining the wall of the building as an epidermal surface have scarred scars, signs of topographical reliefs. Here the reality, combined in a reassuring equilibrium, appears precarious, for its lost in projections and imaginative journeys. Angelo Massaro, with the work Nomade Fermo invites the public to the practice of abandonment, to an unstable path, where darkness symbolizes human illusion to reach a reassuring balance and mature self-control. Felix Curto, a well-known artist in the world, analyzes the idea of ​​travel by interpreting his culture through the mythical filter of cinematography and American photography. Antonio Cavicchioni, in his series Koreana Gangnam Night Tales, explores the Asian territory and shows a nocturnal ocean of disquieting and surreal presences, illuminated by artificial neon lights.

The exhibition then follows in a second place, Via dei Gobbi 3, at Palazzo Gobbi. This last location is inhabited by other artists who stay there daily with their own studios. With the movement of artists and the public from one location to another, a sort of ritual has been realized, a journey across the border, thus evoking an idea of ​​cosmopolitan mixing, of trespassing and integration. In this way, the spectator became an integral part of the project, invited to make a journey that forced him to cross the physical and material boundaries of the two structures and transfer his Se from one space to another, acquiring a new presence, sharing new here that is a not here.

This is how the experiment that the curators care about takes place and, as Domenico Russo explains, the artists “try to adapt to the internal system of the building community, test their identity by subjecting it to the difficulty of the migrant. Their level of insertion establishes a personal dialogue with the public and the locals, revealing the structure of the current diasporic condition, understood as the now common mobilization of people and things through spatial limits. “ 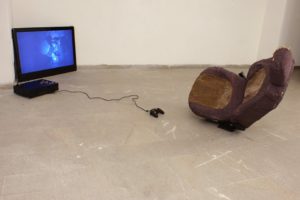 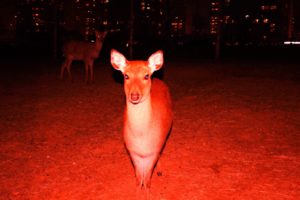 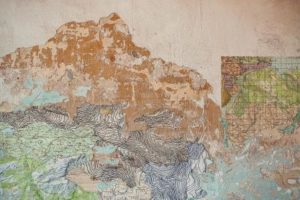