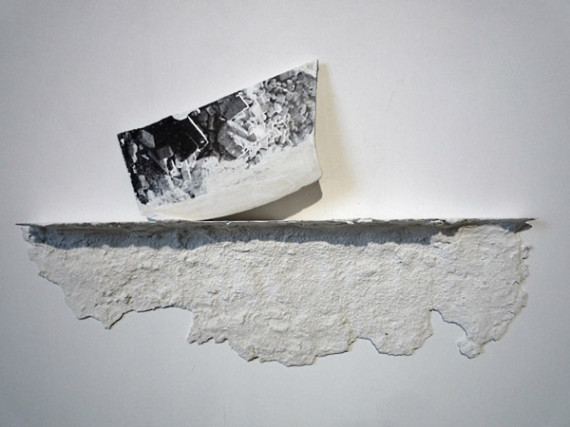 Until April 19th in a hall of the Permanent Collection of Mambo will be open the solo exhibition of Franco Guerzoni Archaeology without restoration edited by Gianfranco Maraniello. The artist, forty years after its debut at the Studio G7 Gallery in Bologna, presents to the public a repertoire thought as a kind of artistic and existential balance that brings out the coherence of his work, always focused on the dream of a past irretrievably lost and on the survival of its fragmentary traces.

Over the years this visual philosophy of abandonment and ruin was confronted with the great pictorial history of the twentieth century and the different formulations in which he declined it reconstruct the evolution of his personal point of view towards the heated debates that periodically have challenged the foundations of artistic practices. The works of the early ’70s, strongly influenced by the results of conceptual research on new languages and by the dialogue with other young Modenese his countrymen like Vaccari, Parmiggiani e Ghirri, use photography as a vehicle for images taken from reality, on which occur subsequent artistic insertions. In the Antropologie series (1976-1978) small photographs of shelves on which books and household containers line up show fragments of life removed from time and materialized trough a layering of evocative objects that avoid their fate of oblivion. The installation Archeologie senza restauro (2014) draws from the endless archive of the shots that Guerzoni and his brotherly friend Luigi Ghirri realized in the 70s during their wanderings through the countryside of Modena in search of contemporary ruins and abandoned places. Printed on scagliola and mounted on fragile gypsum arranged on the wall with the essential elegance of a zen sky, the images involve the surrounding space in the consecration of the memory that becomes material.

From reconnaissance and reworking of the work of youth were born also the two Stanze (2014) showing the sculptural evolution of his previous portraits of interior on which the artist was used to settle concretions of materials. Here the photography is hidden by a plaster structure that encloses it making tangible the loneliness of places uninhabited by the memory that you can only glimpse through the holes of the container. In this further elaboration of the photographic medium an image about to become other takes shape investigating the thresholds of representation with a new stratified physicality. The interdiction of gaze originate also the two Caves (2014), three-dimensional works inspired by the prehistoric paintings made of dung and fat in the Grotta dei Cervi of Porto Badisco, walled up after the discovery to preserve their existence. Ideally retracing the anthropological memory in an attempt to reconstruct and imagine the forever buried decorations with the ambitions and the thoughts that molded them, Guerzoni with the two structures of gypsum and paper in precarious balance, reflects on the transitory nature of the artwork. The eloquence of the painting is back in the Strappi d’affresco series (2012-2014), large canvases on which layers of overlapping materials accumulate: veil, plaster, stucco and shards seem to compose a map of cover-ups and emergences that interprets the time as depth and sedimentation. From the crumbling of the ruined surfaces emerges the color intensity of the underlying layers that have retained the excitement of a discovery still throbbing with life.

Thinking about Calder and Calzolari, the artist has placed some hidden devices, which he defined secrets, inside a Cave and a Tear of fresco: the slight movements of a protruding paper and a pendulum of stucco are camouflaged with the air movement of a crowded room, directing the attentive visitor an encrypted perceptive warning of time passing. Affresco in corso d’opera (2014), installation work made specifically for Mambo, concludes the exposure: a curve table from the wall juts out toward the viewer behind scaffolding of rotten and disjointed wooden planks that underpins other pigmented woods and archaeological pieces. Everything is abandoned, as if the author had interrupted his work leaving the sedimentation of time the task to propagate irresolution in a perfect reunion of his personal memory with the ancient history of man. The scaffolding, privileged subject of specific photographic campaigns implemented with Ghirri in youth, continues to exert on him his powerful fascination, which acquires a temporal connotation here through different turnings of the poles that make up the structure. 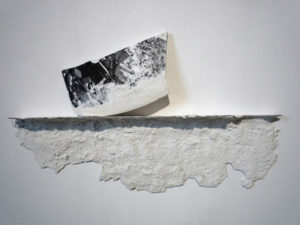 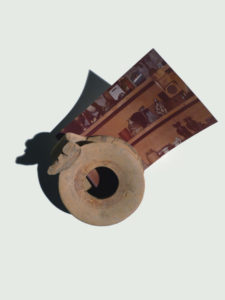 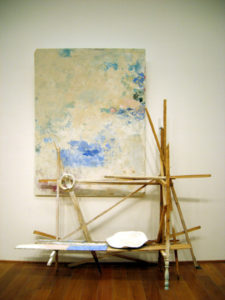