Giovanni De Gara. One, no one … one hundred thousand 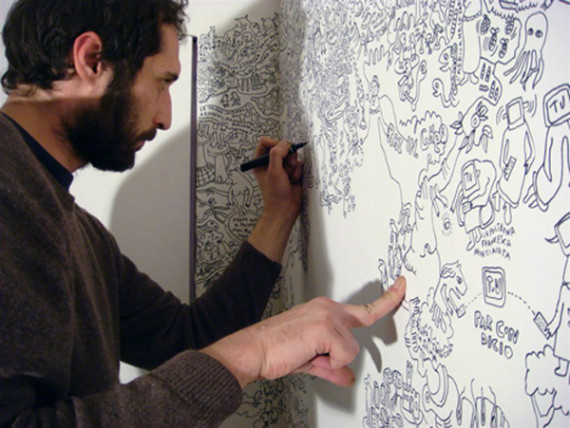 During the Author’s Evening of Artelibro 2014, the Spazio Testoni Gallery of Bologna inaugurated One, no one … one hundred thousand, an exhibition of the Florentine artist Giovanni de Gara which presents a selection of artistic projects realized in recent years. Irreverent, dramatic, cynical, winking and desperately critic, his work is similar to a kind of metonymic and additive architecture that invites the viewer to venture into a labyrinth of reasoning where incredibly the way out always coincides with a possible new starting point.

Each room in the exhibition is a workshop in which the consequences of an idea dilate in space by following the unpredictable developments of a hyperbolic consequential chain that aligns metaphors and paradoxes with strict inductive logic. The vertigo of sense that results is as striking as certain aspects of economic, social and cultural human globalization that de Gara pretends to accept with enthusiasm in his creative universe. Painting, installation, video and performance help to create a really playful and absurd but deeply disturbing reality because of the identity with the hidden functioning of our everyday life amplified by mass media information. In the video Ri-usciremo a vedere le stelle, for example, the artist depicts himself as a television presenter in the surreal TV auction of the masterpiece of the imaginary painter Remo Castello, born in the 30s by futurist father with dadaist lover. An anonymous painting of a blossoming cherry tree in the middle of a courtyard surrounded by houses becomes an excuse for a metaphysical phrasing through the stereotypes of the most recent history of art up to face the eternal questions of Western civilization: Man has always been here? Who came first, the chicken or the egg? Who really built the pyramids in Egypt? The Ikea trees are man-made or grow by themselves? “The answers await our questions,” says the artist’s alter ego, questioning the fate of the post-atomic world and at the same time presenting the essence of the creative process of Giovanni de Gara: art’s reasons are deep if they are connected with life and each of its manifestations is lawful if the aporias of the real world cause a much more radical disorientation.

So the environmental disaster caused by the explosion of a British Petroleum oil rig in the Gulf of Mexico raises the cycle Looking for the Pope, an eschatological journey of a geisha in search of the Pope, who will eventually find in the BP oil the Black Pope whose reign will prophetically precede the end of the world. A few strokes of paintbrush evoke the delicate figurine in kimono strolling on the desolate scenery of the extinction of the West: football fields in three-dimensional view where the penalty area becomes a temple and lonely landscapes purchased at antique markets in which the artist has paved each path. With caustic innocence de Gara identifies the signs of our civilization in a visionary apocalypses that eternalizes monuments of cultural banality, leaving eloquently suspended every judgment. The boundary between art and its deception can be very thin: the asphalting of an other’s framework ostentatiously throws it into the contemporary and the line drawn with chalk that marks the two-lane metaphorically charges itself of the precariousness of existence because it is literally going to disappear.

A forum of apes meet on a football field where a watermelon accidentally fell down and when it will be used as a balloon it will reactivate the evolutionary process that had been interrupted by human self-destruction. In anticipation of this, the artist may grant a long green pause painting modular panels as if they were wall hangings whose floral decoration becomes morbidly lush. The ambiguous and pleasant figuration seems to rise from reset to wrap its obsession: the abandoned soccer field-theater of death ideally concealed by the shoots that the interruption of civilization has allowed to grow. The ideas in the imaginary of Giovanni de Gara work as woodworms that digging into the folds of evidence build architectures of thought in a delicate balance between poetry and disillusionment: The real story of a tree becomes a series of wooden books translated into several languages ​​that aspire a best-seller edition, while the sale of Sassi al kilo into signed glass containers is legitimized by the fact that the consumer society has transformed the zen in a luxury item.

From the multiplication of the module to the free proliferation, the exhibition ends with a room devoted to the project Let Me Write, an intricate narrative of black and white signs that covers the walls and expands itself in the virtual space of a video projection. Through the clarity of his automatic writing that switches the vacuum to horror vacui, the artist creates an immense palimpsest animated by swarms of characters in constant metamorphosis. Utopian map of platitudes and madness of being in the world and perhaps analogical transfer of the globalized information that pervades our era, the epic of the sign that de Gara carries forward from 2008 mockingly does not mind its inevitable decorative outcome. In fact, the design continues from the wall to the ball lamps laid on the ground and expresses its readiness to adapt to any surface and, ultimately, also to be sold by meter. 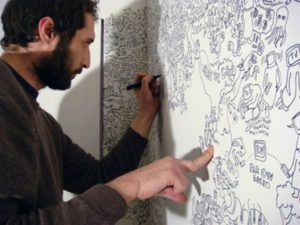 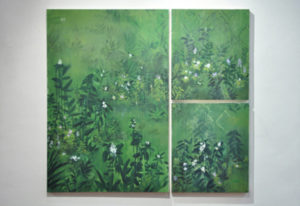 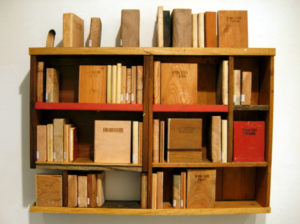 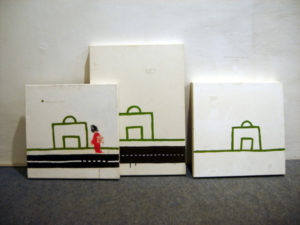