Although uncertainty continues to grip us, a glimmer of certainty comes from Castelnuovo sul Garda, near Verona, where Ruben Montini founded CONFINO, the artist-run space that gives a voice to LGBTQI+ artists and issues. Montini wanted to transform his home into a space that would give him the opportunity to exhibit what he finds interesting, without any aesthetic or commercial compromise. Inaugurated last June, “the founding idea is to create a free space for young Italian homosexual artists, or those who live permanently in Italy, alongside an established one – the first was Jacopo Benassi now on display at Centro Pecci – for to give them an opportunity and, at the same time, to fill a void in our exhibition panorama”. Too often, in fact, in Italy, one encounters a widespread feeling of reticence in showing the work of homosexual artists starting from the clarification of their sexual orientation which, on the other hand, like race, socio-economic origin or religious belief, shapes the works and forges their meaning in an essential way. The founding act of CONFINO was the performance If it doesn’t kill, it fortifies, during which Montini tattooed two names on his arms with the red color: Nicoletta and Rubenitta, both feminizing distortions of his name. He, who suffered them, bullied, throughout his adolescence, decided that it was these two souls, who have always lived with him, living with his male part, to introduce Jacopo Benassi, Nicolò Bruno, Luca Frati, Luca Di Giamberardino and Valerio Eliogabalo Torrisi, the protagonists of the collective exhibition Prima della Prima. Focusing on male artists, Montini says, “is a choice dictated by wanting to talk about what I know personally, without any kind of discrimination. I think, and I want to clarify it, that an in-depth study is as necessary as it is urgent precisely when it becomes specific, avoiding a sterile generalization ”.

Elsa Barbieri: In your works, Nicolò, you can breathe something that makes my thoughts run to the verse of a famous song in which you can breathe ‘taking care’, “From the injustices and deceptions of your time”. Tell me what it means for you to take care, in your works as an artist and in your life as a man.
Nicolò Bruno (Milan, 1989): I believe I have a natural predisposition to take care of myself. Of my plants, my home, my friends and my loves. Care is an act of co-dependence, knowing that you exist in order to protect someone, something, it is a purpose and often a necessity. To not feel alone, to feel useful. Care in my work has the same emotional value, even if the works often arise from an expressive need, they are an act of love. That’s why I mainly use images extracted from my experience, they are intimate narratives, moments full of strong emotion. Photography captures the moment, but it is painting that transforms them into a story. Because painting is a special being, and I will take care of it.

E.B.: Luca, your words sounds lyrical, precious, elegant over fabrics that, deliberately, have no formal rigor. Indeed, they seem almost mangled. You are very good at narrating, it almost seems to feel that feeling of need, of urgency, of carnal and spiritual need. You are very young, yet you master emotions that not always, not everyone, feels or understands. Tell us about yourself, your research and your visual language.
Luca Frati (Gubbio, 1997): I come from Gubbio, a place full of traditions where many things are taught through the making of hands. I grew up with the desire to learn, more on a practical than a theoretical level, I would say. Almost always what I write comes from a communicative urgency, I believe so much in the power of words: writing for me makes things real that were previously only imagined. For me, language generates reality. I believe that my research seeks to deal with precisely this, namely the creation of utopian spaces: where everything is real because it is named. Whether it is extreme sweetness or unprecedented violence. My language feeds on a little of everything and I try not to discard anything that attracts me, whether they are images taken from comics or religious iconography, I try to keep everything together. I have always respected the “distortions” of my works, their being imprecise and formally fragile, it is their nature. Each piece for me is a new note that I take about what interests me, a way to understand a little better the reality that surrounds me.

E.B.: Luca, Prima della Prima welcomes the visitors with one of your works, a banner that welcomed Mathias to life, as if Mathias were each of us. Indiscriminately, man or woman, whether we were, because you replace the welcome ‘O’ with a sewn sun. What messages do you want to give us with these works? But above all, where does the idea end and where does the action of this work begin?
Luca di Giamberardino (Rome, 1993): The work starts from a tear. From the hospital in the city where I live, Massa, I recover the banners that are removed, always with such violence that the edges, attached to the railings, tear. By intervening with embroidery on the gender vowel, I claim to be able to choose who we want to be. Embroidery has always been part of me and for me it is a tool of description: a flower, a sun, a kiss on the cheek or a sentence with a threatening tone. Ways of being I wish they didn’t survive in the reflections of the beholders but permeate their daily actions. So I feel like I can give the right celebration to a being who deserves the best, starting with a life free from stereotypes and cultural bullying.

E.B.: Valerio the words of the works you exhibit lead and hold in a point that seems to be the one immediately preceding the point of no return. What place is it? How do you live it and how do you live with it? You also show a video that in a certain sense wants, perhaps pretends, to be seen through perception. Where does real data end and where does fiction begin in your video production?
Valerio Eliogabalo Torrisi (Catania, 1993): Words have a well-defined role: to communicate. All the words that I report, “my writings”, are born, or were born, in specific moments, of despair and crisis. They are born everywhere, around the city or in the dark of my house. They are written messages and never sent, requests for attention, forgiveness, denunciations of disappointments. All the words that I carry over in my images, or that form new ones, take their place in my white sheets and on the city billboards, on the flat facades of the houses in Milan. It is not a physical place, it is mental, emotional. And it is that of pain. I wanted to scream at them, those phrases, or say them softly, but they always remained safe in my screens and in my papers. It is a place that I like, to be honest. I return often, even when I’m not invited. Even though I am thousands of kilometers from “that place”, I like to return to visit it. When I have written, or I write, I take a trip and the destination is always the same: an immense and profound sadness, and I like to swim in that sea, to drink its water in large sips. After all, sadness quenches my thirst, leaving me with that unpleasant feeling of an implacable thirst. My writings are never an invitation to embark on the journey with me – it is a place where there is room for one. What I would like is that everyone could visit their own “sea”. In my videos, fiction and reality coexist. There is no real data that does not have a part of fiction in itself. The video shows exactly the reality: I, in front of a camera, crying. Everything that is behind, that comes first, is not fundamental. What you see is the only thing you need to know. The work on display is titled Drama tests, and everything is immediately revealed. I have been emotional since childhood. There are those who find beauty in a smile, I have always seen beauty in the tears I shed in front of the mirrors. I literally loved crying in front of mirrors, and growing up I learned to do it on command. Tears probably are – and were – induced, but all that motivates them is – and always has been – real. They are tests, it is a game in which I have always won, but every victory requires hard and long training.

The artists’ responses have been a tool for me to combat the reticence in wanting to omit or neglect a sexual identity that instead deserves to speak in a different voice and to visually translate what it has to say. The second CONFINO appointment is scheduled for December, with new protagonists, who will certainly awaken those consciences that are probably dormant, perhaps unwittingly, in a sort of internalized homophobia. 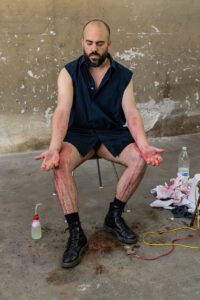 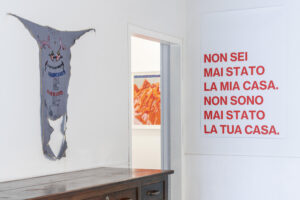 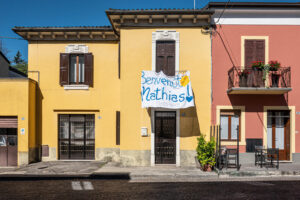 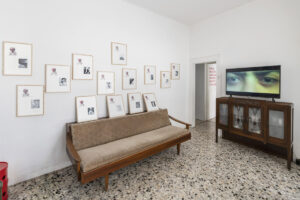 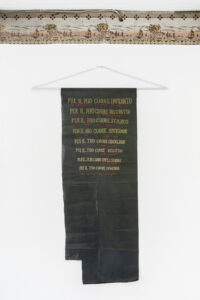