CODEX: the complexity of conte..

Milan and Venice have decided to pay homage to the great Polish artist through the double exhibition Dire il tempo, curated by Chiara Bertola, hosted respectively by Building and Querini Stampalia Foundation, with the ambition to provide the public a retrospective exhibition of Opałka’s entire production, from the most famous and celebrated Détails to the first unpublished works, influenced by the Polish Constructivism.

Building, divided into four exhibition floors, presents until 20 July 2019 an exhibition characterized by a selection of paintings from the Détails series, some Cartes des voyages and 35 photographic self-portraits accompanied by the recording of the sound of the artist’s voice. The entire Opałka 1965/1-∞ program is thus returned with consistency and completeness.

«More than forty years have passed since I stood in front of a canvas that I had uniformly covered in black; with my left hand I took a small white jar, ready to receive the brush I held in my hand right, in a still suspended gesture, but with the mind already completely immersed in the decision taken and in the reasons behind it. (…) Trembling due to the tension in front of the madness of such a feat, I dipped the brush in the jar and, slowly raising my arm, I left the first sign, 1, at the top left of the canvas, so it would not remain space outside the only logical structure I had given myself».

In 1965 was born the first Détail, generated by the number 1 and not by the 0 because Opałka didn’t want to create a work from non-existence. The subsequent action of whispering “one”, in sync with counting and writing on the canvas, made the artist understand that it was a quality of time that was always existing and always individual, in a conceptual relationship with the infinite. The Greeks themselves considered the number one as presence, not divisible and therefore substance.

Work tool, indispensable companion of a lifetime, brush n° 0 – corresponding to the smallest diameter of a series of brushes – began to trace the successive numbers, respecting a certain size and a certain distance between one number and another: each line on the canvas, including the spaces between one number and the other, included between 380 and 450 units.

Opałka also fixed the size of the canvases of Détails, 195 x 135 cm, equivalent to the size of the door of the first Opałka’s studio in Warsaw, but above all characterized by an anthropometric relationship whereby an average man can easily carry one with open arms.

In 1972, after finishing the Détail of the first million, Opałka decided to gradually lighten the dark gray of the bottom of the canvases, clearing it by 1% for each subsequent work. The artist’s ultimate goal was to achieve a fusion between the white of the figures and the white of the canvas, on a path to infinity: «At that point, during a very brief moment (the one that the acrylic painting takes to dry) the written number that will accompany the recording will be visible, during the  moment in which the painting is still wet, on an opaque background, before totally disappearing in his whiteness».

The only testimony of Opałka’s pictorial action and of the Détail’s material execution  is therefore the magnetic tape, which records every number marked by his voice in the instant the brush impresses it on the support.

The intention to provide a visual form to the passage of time is the fulcrum of an extremely ambitious and disciplined program, which makes Opałka a “funambulist”, as Chiara Bertola writes in the critical text accompanying the exhibition Dire il tempo: «the line of numbers that he paints is like a cable stretched over nothing, on which he himself proceeds in balance, without being able to go back, step by step, leaving indelible marks on his journey».

This unicum was interrupted in 2011, with the number 5607249, painted in white on the last canvas with an equally white background. In Venice, the Querini Stampalia Foundation Museum will host until 24th November 2019 the first and last Détail gathered: the beginning and the end of a journey through time are reflected, creating an invisible bridge to the light. Thus Roman Opałka’s gaze, immortalized since 1992 in his daily self-portraits, will be indelibly reflected in that of the beloved Auriga of Delphi, «the eternal dimension of the ephemeral, which for me is art». 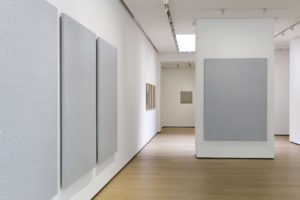 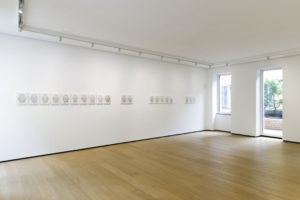 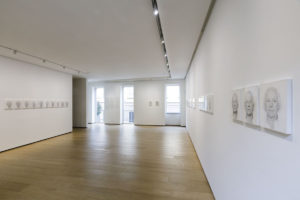 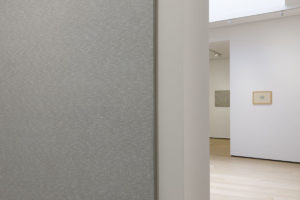 Independent critic. She collaborated with the Melesi Gallery carrying out research on Jiri Kolar and Giovanni Manfredini and with the COE Association as part of the “Breakfast on the grass n. 2 “, dedicated to Hsiao Chin.