In one of the dialogues that Paul Cézanne had with his dear friend Joachim Gasquet, regarding the excessive explanations that artists usually gave to the public, the artist from Aix-en-Provence stated that a work “you either see it immediately or you never see it. Explanations are useless. Why comment? It’s all an afterthought.”[1] With these words firmly in mind, you can visit the exhibition dedicated to Enzo Cucchi (Morro d’Alba, 1949), entitled Antifragile at COLLI Independent Art Gallery in Rome. The short but intense exhibition hovers like a swirling current of air, ready to break down art’s methodological codes, and leads Cucchi to create works at the edge of impossibility, close to the dynamic creative madness that only he possesses, blurring the boundary between art and life. This interesting retrospective is based on the artist’s reading of Ezra Pound’s poems – from which stemmed a diptych, while the title of the exhibition is taken from a quote by the poet Nassim Nicholas Taleb. Antifragile is a microcosm in its own right, and the exhibition gathers all the emotions inspired by the intense rhythms of the world, nature, and the wild turmoil of life. The exhibition will be followed by a publication, currently in production, edited by Viaindustriae and Colli publishing platform, in which Cucchi’s drawings, thoughts and notes will be collected around the exhibited diptych Untitled (Pound).

The three artworks, set up with perspicacity and calibrated harmony in the gallery space, become a kind of skylight. Such an intense approach to artmaking could only derive from an overall involvement of all the organs of the human being, whose poetic art, in this case, is a stimulus for an active and productive voluntary use of our vital apparatus[2]. Cucchi, in other words, intends to involve all organs, even the less noble ones, so that creativity emerges from the marasmus of man to find a moment of development in the vital nymph of poetry. The works are born under the sign of an elusive and fleeting creation, based on a method by iridescence, posing as artistic wonders between tragedy and primordial fascination.

Cucchi’s artistic research is introspective, dense with meaning and profound questions, revealing in his above-mentioned diptych Untitled (Pound) the mysterious tangle between his art and poetic production. This work consists of two concrete bases covered with ceramic inlays, representing faces with a threadlike appearance and a parodistic character, portraits on which the alien presence of a bird alternatively rests. The somatic traits, defined by twisted graphisms – in which we may recognize the physiognomy of Ezra Pound – arise from a typically anti-hedonist visual ferment and it is clearly perceptible the need to move away from the symmetrical, from the eurythmic, to find living stimuli in the cryptic. In the diptych there seems to be an elastic encounter between the licit and the forbidden, between consciousness and unconsciousness; what the surrealist André Breton said about a sculptural work, understanding that “the plastic work must refer to an interior model, otherwise it will not be”[3]. Thus, despite the heavy consistency given by the voluminosity of the concrete blocks, they hover in the air like moments of incarnation with Ezra Pound’s poetry. An encounter with poetry, which Cucchi has always used to suggest bewitching and cryptic images, so the artist himself states that “poetry must immediately tell me what it is about, it must immediately give me the subject, it must immediately tell me what the image is, what the miracle is.”[4]

Clearing (Radura), is the title of the sculpture longitudinally placed in the exhibition space, which originates from a collision of ceramic elements, like a creature in a state of tranquility, seeming to stretch out in a powerful will of fairy-tale life. A term to be understood not in the romantic sense but in the sense coined by the philosopher Nietzsche, according to whom the real world has become a fable[5] and is presented to our eyes as a false idea. The material remains crudely treated in some parts, while in others there is a white patina that opens to areas of shining color; on the other hand, in the final joint of the sculpture there are ceramic inserts with spikes, like further moments of inertia of the surreal creature. Cucchi is not interested in the philosophy of the beautiful material, preferring instead a sculpture that lives and shines, like a shaggy being with material roughness, the daughter of a fire-eating artist. This way, the artist places himself firmly far from the descriptive and explanatory tasks of art, to approach it rather in a vitalistic way, where art and life match, generating an imperfect sculpture, set in a suspended actuality.

Among the works in the exhibition, Avant-garde dance (Ballo d’Avanguardia), stands out for its aleatory features; the choice of painting with oils on a fresco base gives a certain porosity to the colour. The work is built on the elements of place, space and air: the horizontal board, in fact, expands, and the portrayed figure, together with the ceramic excrescence, becomes a whole, where the only spatial limits of a place designated by the dynamic passage of the ether draws the curtain towards a being floating in a quadrupedal posture. The artwork comes alive and vibrates as if it were a membrane that feeds on this passage: the figure could be taken from a Roman mask, perhaps as an icon of a state of mind, which is presumed to be terrifying and turns its gaze on us to remind us that the body, as well as being seen, is also seeing. With Antifragile the artworks, free from prejudices, extrapolate from the dangerous logic of contemporary art and its absurd functioning: each creation, in other words, goes back to the internal motives of art and reveals itself as evoker of mutually contaminating sensations. The essence of the exhibition is in the artist’s skill, according to which the artwork is presented to the spectator in its need to be devoured, drunk in large gulps, as a moment of an initiatory journey towards its obscure roots, to make us rise and open up towards a sensory intoxication capable of “knowing how to make us see and feel, where the word – in this case poetry – fails.“[6]

[5] Friedrich Nietzsche, Twilight of the Idols: or How to Philosophize with a Hammer, (1889), Adelphi, Milan 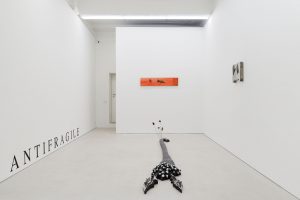 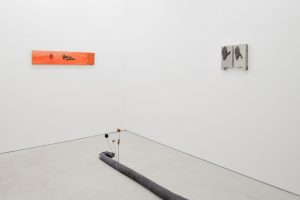 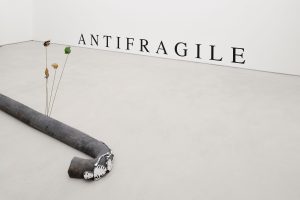 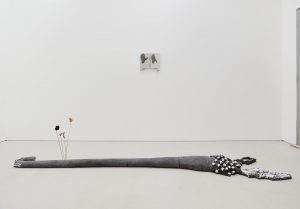 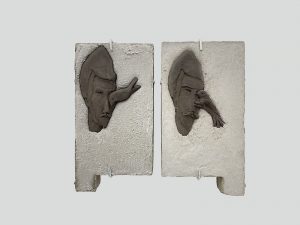 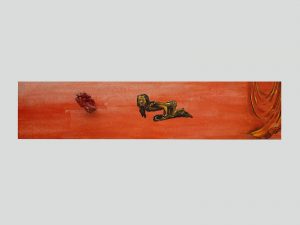