The #25 edition of the Natura Dèi Teatri Festival is underway in Parma until November 26, which brings to completion the reflection on the Tender, Smooth / Striped theme, inspired by the work of the recently deceased philosopher Jean-Luc Nancy, which the artistic directors of Lenz Fondazione Maria Federica Maestri and Francesco Pititto have elected as the research area for the period 2018-2021. In 2021 the Festival focuses on the scenic, visual, musical and choreographic elaboration of the concept of effort, through the interpretative contribution of 24 artists from different generations and backgrounds. This feminine choice, as Maria Federica Maestri explains, derives from the desire to spread “a very clear political and cultural message and to highlight the expressive power and aesthetic density of women in the contemporary artistic panorama”.

As part of a varied performance program that saw the alternation of choreographers invited to testify their visionary approach to dance, such as Doris Uhlich, Gloria Dorliguzzo, Cristina Kristal Rizzo, Silvia Rampelli and Antonella Bertoni, the festival was the an opportunity to present the two new productions by Lenz Fondazione as a national premiere: La Creazione (19-22 October) and Orestea (13-20 November), which we attended.

In La Creazione the performer Valentina Barbarini and the soprano Debora Tresanini accompany the audience in a reflection on the origin of the universe (or universes) by interpreting two scenic figures – the Theologian and the Scientist – called to prove the existence of the initial One and to find residual traces of it in the creative present with the tools of the body, music, images and thought. The mystery of the “time before the beginning of time” questions the limit of the human perspective in a whirlwind of verses, repetitions and lamentations that immerse the viewer in a primordial broth in which ancestral nostalgia, divine shocks, contemporary anxieties and cosmic implosions, as well as suggestions inspired by the texts of Genesis, the Psalms and the poem Paradise Lost by John Milton, harmonized by the sound accompaniment of Franz Joseph Haydn’s Die Schöpfung, entrusted to the impeccable solos by Debora Tresanini.

The stage space is identified by a double transparent and semicircular veil, curved like the deformations that space-time imposes on the masses of the bodies, on which further cosmogonies of images appear that seem to cross the physicality of the two protagonists. The projections mix reworkings of shots of the Correggio Dome in the Parma Cathedral, in which a riot of angelic creatures welcomes the Virgin into Heaven, with visual finds from previous shows that reread the scenic archive of Lenz. The misterious hole located at the apex of the Parma dome (clearly visible only at close range) is here interpreted as a primordial egg that exploding generates other black holes, whose visual representations are taken from scientific films, capable of giving rise (or dissolution) to infinite parallel dimensions and to as many variables of meaning, poetically united by the fact that in each of them, in a different way, the dust of God’s filed nail is human and cosmic matter.

The premiere of La Creazione was followed by the choreographic play Folk Tales by Gloria Dorliguzzo, a refined duet of ephebic bodies that implement a hieratic game of reciprocal positioning on a board marked by trajectories and marks. The scenography, the music, the costumes and the movements of the two performers create an ambiguous epic post-videogame atmosphere, in which the viewer is able to perceive the coercion of the stringent system of rules that determine the dynamics of the dance without ever being able to decipher them.

Orestea is a show in three acts / creations (# 1 Nidi, # 2 Latte and # 3 Pupilla, freely taken from the three episodes that make up The Eumenides) that reinterpret the tragic work of Aeschylus in a contemporary key with the help of the tribal sound composed by Lillevan, one of the most significant artists of the international electronic music scene. The trilogy retraces in a fragmentary way the ancient saga of the Agamennid lineage, ravaged by the violent deaths of the head of the family and his lover-slave Cassandra, victims of the furious jealousy of the betrayed wife Clytemnestra, in turn killed for revenge by her son Orestes with the complicity of his sister Elettra. The new staging, consisting of rooms delimited by transparent gauze walls, sets the action in an indecipherable rarefied space in which the epiphanies and the disappearances of the characters and symbolic objects, on whose alternation the viewer fails to have a perceptual or rational control.

On the other hand, there is no doubt about the semi-divine essence of the characters on stage, who move with feral royalty alternating uncontrollable hysteria, sudden aphasia and cadenced sequences of liturgical gestures that involve the spectator in a primary theatrical experience in which even catharsis seems to be a further sinking into the contradictions of an impossible dystopian ethics. The power relations between the stage figures (among which we were particularly struck by Sandra Soncini‘s Clytemnestra, a disturbing femme fatale who has nothing to envy to the worn and devouring women of the Nordic Expressionism) are determined by their reciprocal and fluctuating prevarications. No moral, family or religious rules seems capable to stem the unbridled expansion of passions, the addition of which converges in a sort of secular and human glorification of the female element as the origin of chaos and life. From the cradle-cage of Orestes to the sterilized clinic where the final judgment takes place, temporarily suspending the guilt, no hypothesis of cauterization of the passions seems truly possible, if not the acceptance of a destiny that is fulfilled only by taking it to the extreme their deepest degenerative vocation consequences. 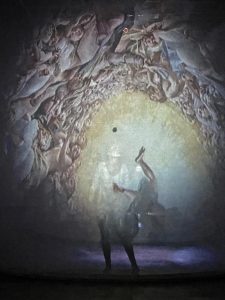 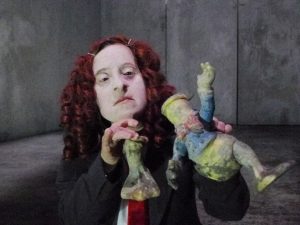 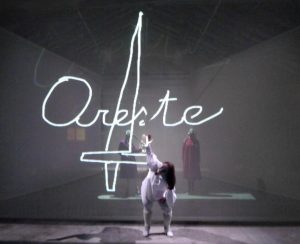