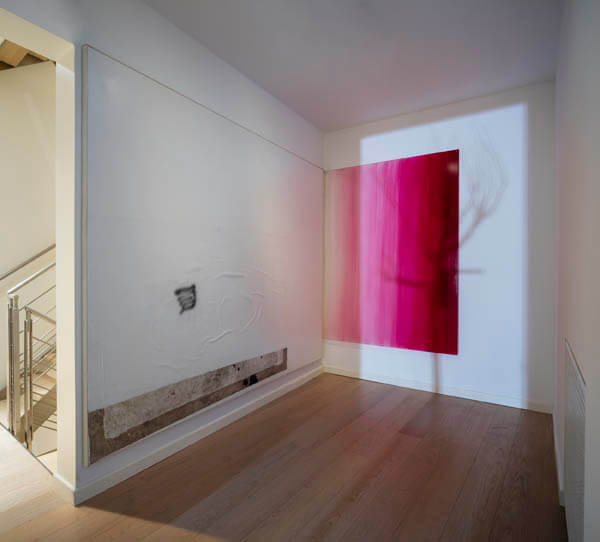 The continuous motion of the moon’s revolution around the earth means that the aspect offered by the satellite to the gaze of man is always different.

From this transformation, which brings the shape of the celestial body to change in the eyes of the observer both with respect to the moon phase in which it is located, and with respect to the hemisphere of the globe from which it is observed, Francesco Stocchi has taken the steps to devise, together with Albert Oehlen, the exhibition with the metaphorical title Fasi Lunari at the Carriero Foundation in Milan. The peculiarity of the exhibition project consists in the fact that central is the presentation of the point of view of the single author in relation to his own pictorial support. As Stocchi writes in the text in the catalog “the problem of space is the first that manifests itself in front of a blank canvas. If infinite opportunities can be equal to none, the possible solutions are used as limits to a paralyzing freedom “. Here, then, experimentation is the attitude to be grasped during the observation of the exhibited works.

Fasi Lunari was born, first of all, from the desire to present the pictorial research of the German artist Albert Oehlen (Krefeld, 1954), always striving towards a deconstruction of the pictorial code; pictorial works are accompanied by the installation Baum 4 specially designed for the space. The latter welcomes the visitor in an enveloping dimension where painting, sound and light are fused together, and united by the presence of a real tree whose shape also appears painted on the canvas. In particular, however, Oehlen’s research is presented in relation to the work of the six young artists – Peppi Bottrop, Andreas Breunig, Max Frintrop, Fabian Ginsberg, Yuji Nagai and David Ostrowski – his former students at the Kunstakademie in Düsseldorf, where the artist he taught between 2000 and 2009. As evidenced by the Fasi Lunari title, the idea behind the entire exhibition project is to present simultaneously, in the two floors of the Carriero Foundation, a series of pictorial works strongly independent from each other lacking a stylistic, technical or formal binder and therefore live witnesses to individual approaches that highlight the heterogeneity and complexity of styles. “If you have in common, these differences can be inscribed in a growth movement (or decrease, depending on the point of view), of spatial and tonal intensity: from the new moon to the full moon” Stocchi writes in the text in the catalog.

Fasi Lunari, therefore, is an exhibition project that visually recounts, through the works, the intellectual relationship – made up of exchanges of views, dialectical comparisons and intersections of points of view – between Oehlen and his students; a relationship that, moving from the Academy’s classrooms, continued in the following years. The exhibition, therefore, is structured in a succession of phases, intended as individual exhibition units that however dialogue in space thanks to an exhibition carefully studied in detail, based on the idea of ​​a horizontal plane where the “weight” of each work is identical to that of others. This means that every work exhibited active, and at the same time it is also the result, of the dialogue with the other works exhibited in a continuous game of contrasts, references and oppositions.

If the paintings, absolutely flat and almost monochrome, by David Ostrowski touch the zero degree of painting, while at the same time remembering the impossibility of reaching it, those of Andreas Breunig pour into space thanks to the insertion of sculptural structures that clutter the exhibition hall. The contamination with the space is also activated in the Fabian Ginsberg series where the polymethylmethacrylate panels lead the visitor to see reflections, while observing the painting, himself, as well as the hall and the back walls. Max Frintrop instead paints canvases with seductive and abstract color compositions, where what strikes the eye are the body of the brushstroke and the density of the color that is spread there. On the contrary, Peppi Bottrop‘s work cancels the color dimension in favor of a total reduction in pure graphite painting. This brings the viewer’s gaze to get lost in black tangles of lines with heterogeneous shapes that, despite the two-dimensionality of the support, have the strength to convey the incisiveness of the gesture that has drawn them. Finally, the paintings of different sizes of Yuji Nagai bring the viewer to contemplate fields of pastel color that welcome tiny drawings of flowers, leaves and plants that, enclosed in circular compositions with a dreamy trait, seem almost to be divorced from the present time. 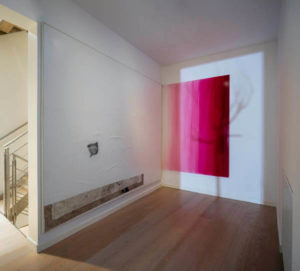 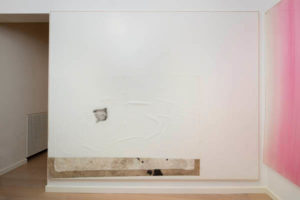 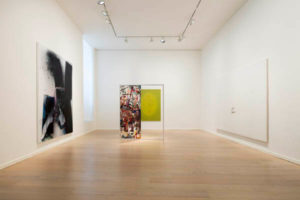