The liquidity of the new media in recent years has revolutionized the status of the image, acquiring the gaze and the mind to chameleonic visions in constant metamorphosis that occur in parallel digital universes in which everything can be transformed into its opposite, without interruption. The rule is the absence of limits and the new dogma seems to be immersion, understood as the total adherence of the senses to the object of perception. The ostentatious anarchy of ultra-contemporary languages, which borrow their technical artifices from open source software for programming videogames by winking at the dynamics of artificial intelligence, is an expression of a self-referential individualism that, in the absence of comparison, generates a dangerous aesthetic and ideological homologation. If the body becomes an inert appendix and the mind channels desire into a virtual elsewhere, it is very difficult to establish deep relationships with what surrounds us and also the imagination languishes in a forest of pre-established possibilities that do not offer real openings towards a truly free and independent thought.

In my opinion these concepts are fundamental to introduce the work of Gaia Fugazza (Milan, 1985), visual artist and performer currently protagonist in Bologna of the exhibition Hostages and Friends in the spaces of GALLLERIAPIÙ. Her painting spontaneously incorporates the phantasmagoric instances of the most up-to-date contemporary imagery without being caged by their codified dynamics and directly draws its own reasons from the ancestral human need to produce images, manifested since the prehistoric era, fully sharing its mythopoeic vocation. The most accredited theories on the origin of cave paintings, previously interpreted as hunting scenes, claim that they were instead made by people in an altered state of consciousness for a ritual function. In fact, these mysterious representations frequently display hybrid characters between human and feral beings, fantastic creatures and undocumented animal species in those geographies. They are found in very deep caves, almost inaccessible shelters where the deprivation of light, the altered perception of time and the winter deficiency of vitamins could favor hallucinogenic experiences. The artist, who has dedicated her master thesis at the Chelsea College of Arts in London to the topic, entitled Art of Former Nomadic People, conceives art as a form of resistance to the anxieties of a closed space (the prehistoric physical space and the contemporary mental space) and as a psychedelic technique of transcendence.

Her work embraces an animistic conception of the world, is placed in an indefinite space-time in which the transition from nomadic to agricultural and sedentary life hasn’t metaphorically take place and welcomes the mystery of a powerful nature permeated with sacred ferocity. By recovering the aesthetic and identity value of the materials she uses, most of them of natural origin without substantial chromatic manipulations, and by re-enacting the sapiential properties of plants and other life forms that populate the Earth, Gaia Fugazza demonstrates how the idea of man’s predominance over nature derives from an ideological misunderstanding of the notion of intelligence, which for centuries has been tendentiously associated with purely human characteristics, such as thought and word. The antidote to these false axioms is for the artist a vigilant opening to non-codified forms of knowledge and intuition, such as altered states of consciousness, in which the subversion of rational logics and the intersection between categories usually considered impermeable become explicit. This mental and perceptive exercise does not result in a generic exaltation of primitivism understood as an absolute value, but wants to be the first overwhelming step of a project of expansion of awareness aimed at the re-appropriation of the infinite possibilities that existence offers us.

This is why in Gaia Fugazza’s practice carving, modeling and engraving are gestures that are repeated as rituals and the materials, which have value above all because of their concrete belonging to reality, are the ingredients of a cure that restores the natural order of the elements for re-educating the sensory perceptions to the osmosis of the forms and to the collaboration between the species. Porcupine thorns, wax, iron oxide, graphite, copper, teal green, malachite, zinc and charred bones stratify on wooden boards to build wonderful dreamlike ecosystems wrapped in an aura of mystery and ambiguity, which seem absurdly familiar but at the same time unattainable. The entry into these visionary worlds requires a prolonged observation and the total sensibility of the gaze to follow the path of a line, to penetrate the splintered furrows of the wood, to slip on the soft and shiny thickness of the wax or to absorb the opalescent depths of a chromatic layer.

Only in this way contemplation can be transformed into an experience: the distance between what is seen and what can be imagined is annulled, the colors of things restore their presence beyond illusion, time stops but the life starts to throb again. Copper in contact with aluminum oxidizes and turns blue or green while an orgy of frogs melts in the heat of a mineral sun. The buzzing of the bees also fills the eyes while at a distance of a few steps the pudimic mimosa is savored while it circulates a double white body. A porcupine pin forever nails the primordial painter in front of the colors of his hallucination; everything can still move, but the balance remains unperturbed. It is at the same time day, night and dawn, around a body of water or a reflection of the sky there are those who drink, those who give birth and those who defecate, while someone, driven by the same greater strength that subjugates the course of the grain of the wood, walks away from his community. The ego becomes the other: at the foot of a large Buddleia plant a pregnant monkey dreams while a scribe draws his thoughts, in the branches the birds hatch their nest in a blaze of inflorescences, which are themselves seeds of new plants and new men. And finally we too are gently taken hostage by a vision that will be impossible to forget. 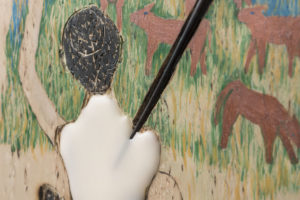 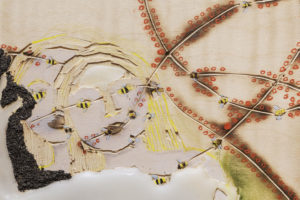 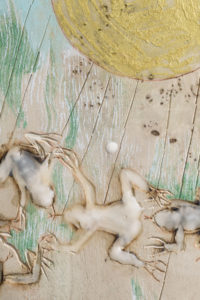 For all the images: courtesy GALLLERIAPIÙ