From art in the toilet to the ..

Giulio Saverio Rossi. Before an image after a pain...

Giulio Saverio Rossi. Before an image after a painting

Giulio Saverio Rossi (1988, Massa. Lives and works in Turin) after three years returns to Bologna for his second solo show at CAR DRDE gallery, where he exhibits three different series of new works that present the latest developments of his research, from the beginning focused on the investigation of the pictorial medium starting from the perceptive and conceptual implications of light. With great perseverance, the artist re-discusses the status of the image, always understood as the sensitive reception of a vision, implementing refined perceptual and semantic overturns that play on the possible encroachments between apparition, dream, memory and mental scheme.

Emblematic in this sense is the painting Before an image after a painting (2021), which not surprisingly entitles the exhibition, the first to be created among those on display and the first to welcome the visitor with its expansive presence when he enters the gallery. It is a large-scale work that, if looked at closely and from the front, occupies almost the entire field of vision of the observer, inducing the sensation of being on the threshold of a dark room, into which the eye is gradually able to penetrate, identifying flashes and sketches of forms. The effect is immersive: beyond the surface of the painting one can gradually glimpse a forest of backlit black signs that recall the idea of ​​a nocturnal or romantic landscape about to be revealed by a mysterious northern dawn. The pictorial plane, crossed by metallic flashes and faint incandescences that reverberate in the blind depths of the dominant black, seems to identify a mental plane of separation / osmosis between a potential figuration and an abstraction still instinctively mimetic, in which the artist’s desire to find out what gives rise to the vision echoes in an image that has yet to be. To get as close as possible to the heart of this enigma, while being aware of the impossibility of its solution, Giulio Saverio Rossi starts from the eye, a sophisticated biological device of interchange between our mental images and the visions generated by light through which we know the outside world. The shady forest that we had initially hypothesized, in fact, is nothing more than an enlarged representation of the eyelids of an eye (singular and universal at the same time), captured from the inside in that particular condition of semi-blindness that photographs the instant in which the light begins to filter through the lashes in the act of unfolding. Or it could be an impression of the opposite moment, when the eye to defend itself from too intense light activates its natural barriers to obscure vision, but the light has already begun to produce involuntary images in the brain that are projected to the inside the eyelids, like the volatile dark imprints that we see with closed eyes after staring at the sun and that we could recognize in some spots with an almost petroleum fluorescence that emerge in the upper part of the painting. The work, in my opinion the most intriguing of the project, materializes with sensitivity and precision the tangle of perceptions that activate thought and emotions before the eye is able to focus on an image, highlighting its direct correlation with the chromatic spectrum of light and with its reflections on other surfaces, the variety of which is reproduced on the canvas thanks to the artist’s ability to manipulate the pictorial pigments to prepare the colors by hand.

One of the characteristics that act as a leitmotif in Giulio Saverio Rossi’s work is his disinterest (at least for the moment) in crystallizing his research into a recognizable and stable style, a choice closely linked to the intent to explore painting itself and constantly fueled by the propensity to range at various levels between the infinite references offered by the history of art. For example, it would be difficult at first sight, if it were not for the unmistakable endogenous light that pervades them and for the similar smooth and soft tactility of the pictorial surface, to bring back to the same author the paintings belonging to the ITEM (videogame) series, each of which depicts from slightly different angles, which seem to allude as a whole to a rotation, a different model of handgun suspended in the sketches of an indefinable semi-natural landscape. In this case, a conceptual approach to painting prevails: the gun-objects that gravitate in space are taken from videogame frames, and therefore subtracted from the narrative flow in which they are immersed, to be transported through the painting to a different backdrop-place. The surreal effect, which I would define as having a distant Magrittian ancestry, is generated here by the translation of the same mental image, originally devoid of its own specific physical individuality, from the digital environment to its potentially infinite pictorial incarnations in order to make its psychic presence and the constitutive evanescence.

The exhibition ends with the four works that make up the Farsi un fuoco series (2021), whose tubular support (the cardboard core around which the canvases are rolled up in the paint shops for artists) guides the eye inside the exhibition itinerary ideally connecting the painted visions to the spatial structure of the gallery. Here the artist faces another recurring archetype of painting – fire and the particular brightness it emits – creating a long horizon of compendiary flames ready to become in turn a real and imagined landscape. 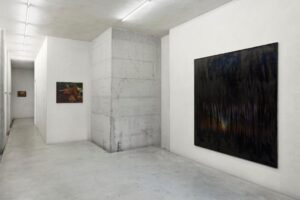 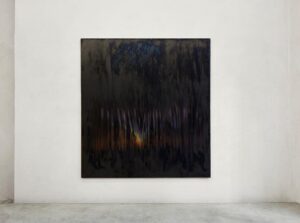 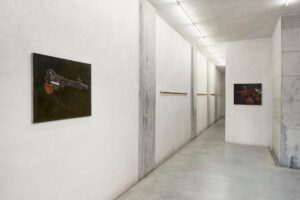 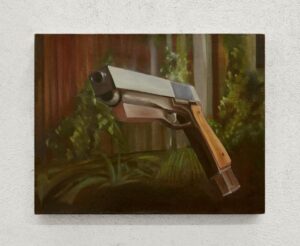