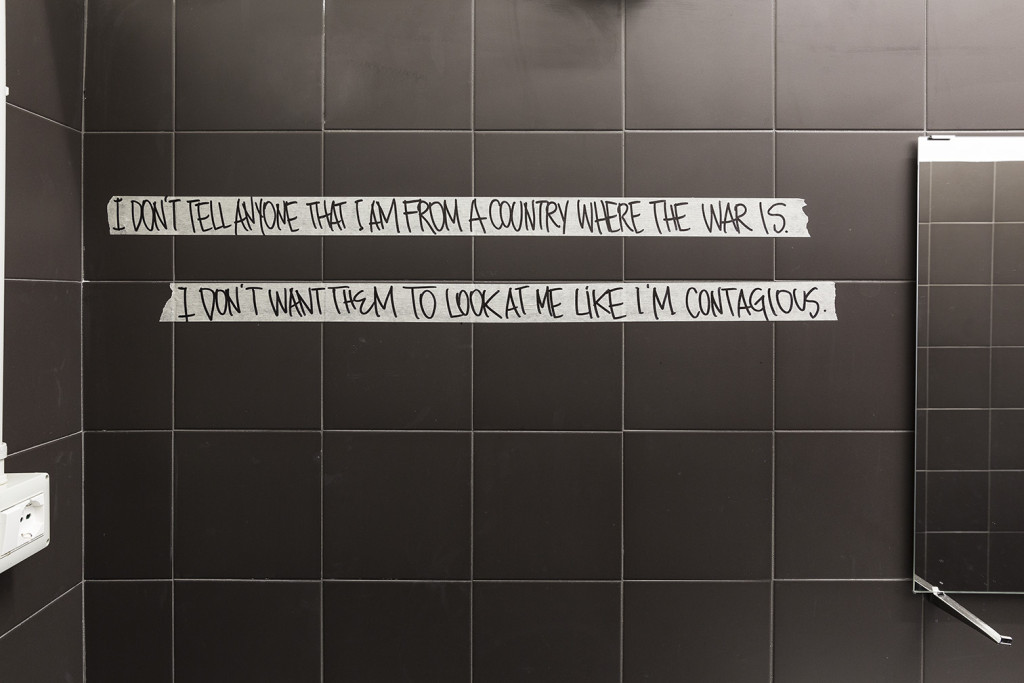 Wars and migrations are one of the most characteristic traits of our present and the global interference of these phenomena has had strong repercussions also on artistic production, which in recent years has explored the aesthetic, social and geopolitical implications of this epochal conjuncture with various levels of involvement and deepening.  The exhibition I Lied in VISA Center presented by GALLLERIAPIÙ investigates the emotional, intellectual and psychological consequences of the disorientation through the works of 8 artists who share a double nationality or reside in a country which is different from the one in which they were born. The difficult process of integration, in addition to the obvious practical and bureaucratic complications, entails a delicate mediation between the previous experiential baggage of the individual and the new reality in which he is often forced to live. Adapting and internalizing otherness to regain one’s individuality becomes an unavoidable existential urgency that involves a radical re-invention of the self and a delicate re-elaboration of one’s own memories. Building a new identity can be very painful, but also interesting, fun and critically stimulating: the works selected for the exhibition by the curator Kateryna Filyuk reflect different ways of connecting personal experience with History and different approaches to the renegotiation between past and present composing an emblematic mapping of the various forms of resistance and transformation generated by cultural eradication.

The title of the exhibition takes up a phrase written on the wall of a toilet in a museum in Berlin that Lia Dostlieva photographed and reproduced on a simple strip of tape glued to the entrance door of the gallery. The statement, which alludes to the false information that asylum seekers are forced to declare to obtain the coveted documents, is the first step of a collection of sentences read or heard by the artist which present in a conceptually and visually lapidary way the dramatic condition of war displaced people.

The narration becomes more intricate in the video made by Elena Mazzi in collaboration with Enrica Camporesi, in which two backlit figures sitting at a table interpret an imaginary conversation between an asylum seeker (man) and an immigrant officer (woman). The dialogue, studded with misunderstandings, shyness and mutual reticence, stages the unsuspected emotional implications of a bureaucratic procedure and the most common misunderstandings with which we tend to identify the other according to generic and pre-constituted ideas. The two characters, stripping with circumspection of their respective roles, establish a labile confidence that brings back the protocol of mystifications on which is based the apparent rationality of administrative practice to its human component, showing the harsh experiences of life and the inner richness of the refugees and the sensitivity of the official fought between her personal ethics and professional rules.

The madness of these dynamics becomes even more explicit in Alevtina Kakhidze’s work, that analyzes the situation of the so-called IDPs (internally displaced people), the displaced people who leave a risk zone of their country in case of war to take refuge in another area of the same nation, analyzing the paradigmatic case of people who in recent years have left the Donbass to move to other Ukrainian regions after the conflicts with Russia and the self-proclamation of the republics of Donetsk and Lugansk. In particular, the artist examines the condition of the most defenseless social classes, sick and pensioners deprived of their economic rights by the recent political order, which to receive the very modest government support for IDPs pretend to have moved to territories still subject to Ukraine while continuing to reside in their homes now located in a surreal land of no one abandoned by old and new institutions. Kakhidze summarizes the situation in a series of naive pictures that tell the stories of 6 different people (including her mother) entangled in this legislative limbo. The singularities of each story converge in a symbolic organization chart that detects the different political, existential, intellectual and legal nuances of the same lie, highlighting how the system is not calibrated to accept the truth and the individuality of the person but only responds to its abstract internal logic . The work is completed by a large mural painting in which the artist draws these people like torn trees suspended on a land littered with bombs, which is flanked by a grove of young trees that succeed, despite everything, to adapt and plant their roots in instability.

The overcoming of unfavorable conditions thanks to the spirit of adaptation is also the central motif of Ola Lanko’s work, who, studying the photographs of Bernd and Hilla Becher, discovers that many of the structures cataloged by the couple were made in the 30s and 40s by Russian and Ukrainian migrants without experience and that their uniqueness despite the standardization of the projects stemmed precisely from the fact that the workers were learning to realize them just as they built them. The artist then decided to recreate the same process of interpretation / improvisation in the gallery by commissioning two North African workers to construct a wooden replica of one of those structures on the basis of a photograph without providing any further references.

An anonymous urban and rural landscape photographed in search of an impossible familiarity is the beginning of the project by Ana Blagojevic, who makes a long journey to discover her roots by visiting Serbia, which she left as a child to move to Italy with her parents, and the other countries of the former Yugoslavia. After crossing stranger neighborhoods and memories, she ends up finding herself and reconciling with her own origins, discovering new places of affection in the music clubs of the local underground circuit, where she finds real correspondences with her personal experience.

Stefan Milosavljevic also focuses his artistic work on rethinking his own identity, identifying its essence in the fusion between antithetical but co-present dualities. In the exhibition he shows a couple of family photographs that portray him as a child at a distance of a year next to a relative dressed as Santa Claus, the first with long hair in which he looks like a female, the other with a more masculine cut imposed by parents. Serbian long-term resident in Italy, in his plastic production reflects on the possible integration of the two cultures that mark his creative sensitivity by presenting a series of sculptures that formally echo the classicism in which the traditional marble is replaced by the ratluk, an edible Turkish colored dough with which a traditional dessert is prepared in connection with hospitality rituals.

Childhood memories return to the work of Andrii Dostliev, who in 2014 was forced to leave his native home and all the objects of his past in the occupied city of Luhansk to flee to Poland. Unable to access his family archive, the artist tries to recreate his affective story by altering a series of old photos found in a flea market through collages and graphic interventions. The appropriation of other people’s memories left orphans becomes a form of adoption that reconstructs with bitter humor the thread of a broken life and tries to re-elaborate the trauma of invasion in a metaphorical peaceful occupation. 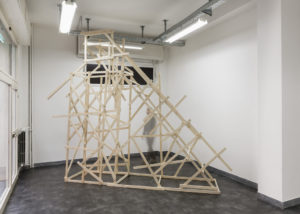 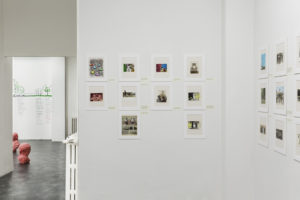 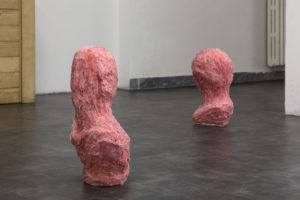 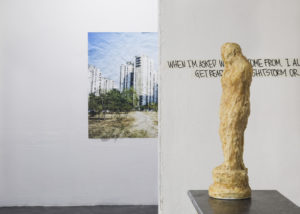 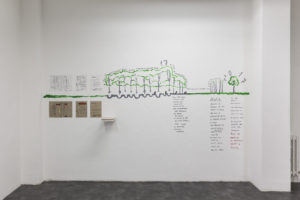 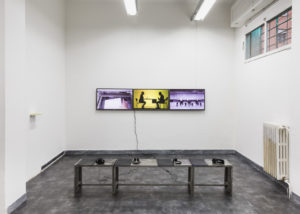 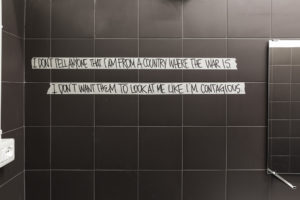 Lia Dostlieva, I lied in VISA center about my parents. They are in Luhansk, 5 frasi su scotch carta, 2018 courtesy GALLLERIAPIÙ 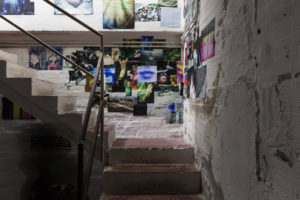