For the reopening of the exhibition season, the Studio G7 gallery stages an unusual duet, the one between the visual artist and performer Jacopo Mazzonelli (Trento, 1983) and the master of Arte Povera Giulio Paolini (Genoa, 1940), guest of honor and ideal mentor of the research of the youngest colleague. The Isorhythm exhibition, whose title recalls a particular technique of musical composition in vogue between 1300 and 1400 that provided for the repetition of the same rhythmic figure in the different motet movements, reflects on the possible correspondences and translations that pass between different artistic languages ​​and on the surplus of meaning generated by these hybridizations.

The scenographic fulcrum of the installation, the immobile engine of its conceptual architecture, is Sottosopra, a work that Paolini created in 2005 for an exhibition in La Spezia curated by Bruno Corà in which he was side by side with Castellani and Melotti, artists already accustomed to attending the musical theme. For the master of Turin, instead, it is a first (and only) time: the musical subject is re-shaped by him through his typical theatrical and structural approach, which analyzes the place and time of representation. Faced with an essential scene in which light pencil strokes drawn directly on the wall allude to a perspective grid, we find two lecterns superimposed in a fragile way, only through the complementarity of their forms. Entangled in the structure and juxtaposed to the wall, we see small fragments of paper sheets, whose impossible recomposition would allow us to read the parallel anecdotes of Verrocchio and Rossini, who decided to interrupt their respective careers when they realized to have been outclassed by the talent of Leonardo and Wagner. These explicit passages of deliveries from one generation to the next confirm Paolini’s conception of the autonomy of art, seen as a self-sufficient and inexorable evolutionary process of which artists become interpreters over time.

If Paolini’s complex work through procedures of fragmentation, quotation and duplication, explores the conceptual implications of the tools of a never explicit representation, which is only evoked by enigmatic traces, Jacopo Mazzonelli focuses his research on the analysis of music by deconstructing, transforming and recomposing sound objects and musical instruments deprived of their institutional function. It is a silent reflection on how sound can cross multiple aesthetic and scientific parameters to arrive at manifestation as image, weight, shape, gravity or silent formula without losing its engaging appeal. Like Paolini, Mazzonelli, who at a certain point in his life abandons his piano and composition studies to devote himself to the visual arts, establishes an ambiguous relationship with the objects of his investigation, which are transformed by his interventions into pure language.

The young artist aims first of all at the oxymoric challenge of giving visual evidence and infinite duration to the transitory incorporeality of sound, placing himself in a lateral observation point that allows him to identify new possibilities of relationship between elements that at first sight seems reduced to a minimum terms. The Aural series (2019), for example, composed of concrete reproductions of sound-absorbing panels used to break the sound and reflect it in different directions, looks like a catalog of conceptual modules whose inclinations and divergences suggest the visual paths of the sound trajectories that are intended to face. Cement for Mazzonelli is an archetypal material, an expression of power and a symbol of anthropized contemporaneity; in his work it recurs as an envelope and imposition that obliges the objects that it encloses to vibrate in another way, without however being heavy for the look. This aspect is particularly evident in Volume (2019), a heraldic trumpet walled into a concrete parallelepiped that seems to emphasize rather than mortify the potential arrogance of sound materializing it in a peremptory physical element.

In Soundwaves (2019), instead, the artist makes visible the expression of the equation of D’Alembert, a French scientist who mathematically described the propagation motion of sound waves, luminous and tides, demonstrating how sound also behaves like a matter subject to the rules of physics, despite its emblematically ethereal and elusive nature. Against the ultramarine background of a cardboard, taken from a Victorian album of photographs, two guitar strings embroider a mathematical formula that reminds us that nothing in reality is messy and random, not even what our senses do not allow us to perceive . The wonderful correspondences between shapes and functions of natural and artisanal objects make the reading of Stereofonia (2019) intuitive, a small work made with overlapping perforated cardboard, which stands as a pendant with respect to Aural. The slightly out of phase stratification of the planes generates two converging lamellar tunnels that recall the human auricles, but also the harmonic casing that determines the timbre and intensity of a string or percussion instrument. Once again the sound “appears” and its form can be perceived negatively with respect to the devices designed to accept it, generate it or reject it.

Mazzonelli analyzes the status of sound and music without ever making them; his strategy is to put in place subtle misdirections that confuse appearances to reveal the unforeseeable implications of what might seem to be hastily obvious. Thus, not without irony, the circular path of the exhibition ends with an improperly orchestral device: Pendulum music (2019), a mobile installation consisting of an array of cardboard boxes, originally packaging of rolls for mechanical pianola, containing random metal pendulums ripple that, striking the wall, produce an imperceptible background noise, the sound of a subjective time to which everyone can choose to synchronize.

Isorhythm, an exhibition of encounters between generations, affections and counterpoints, is a project conceived by Ginevra Grigolo, historical founder of Studio G7 who passed away last September, who entrusts the legacy and future of her beloved gallery to the young Giulia Biafiore. 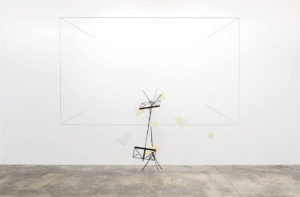 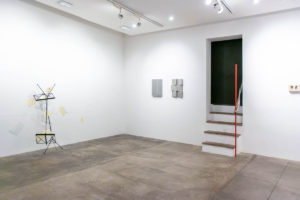 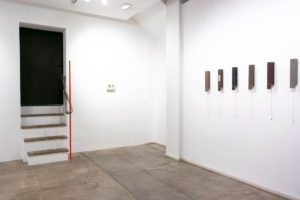 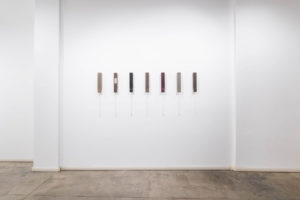 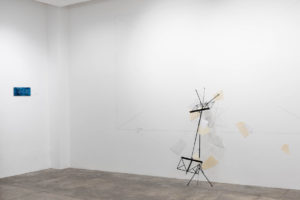