Works for a Cosmic Feeling. Th..

CAR DRDE gallery dedicates the last exhibition before the summer break to the British artist James Collins (Darlington, 1992), at his first solo show in Italy. Occultation presents the most recent results of a research focused on the materialization of a powerful hypothesis of symbiosis between painting and sculpture and on the exploration of the expressive possibilities and conceptual implications that arise from this combination.

Each work is the result of the superimposition of multiple layers of oil paint that create a jagged, rough surface, strongly oriented towards the third dimension, on which the artist intervenes by engraving articulated compositions of signs, which can be interpreted as maps or symbols of a mysterious language not yet decoded. Collins conceives painting as an alchemical process, in which there is careful consideration towards the mixing of the tactile and visual properties of the materials, which is triggered by the accumulation / juxtaposition of the masses and by their mutual settlements during the drying phase. This generates an energetic and metamorphic chromatic paste in which the artist’s graphic interventions, implemented at different moments in the development of the work, model thicknesses that identify hybrid forms poised between abstraction and figuration. Even if at first sight the bustle of the surface and the primitivist feature of the engraved signs could recall the Hautes Pâtes (1945-1946) with which Jean Dubuffet, fascinated by the instinctive way of painting of the mentally insane, released the vital impulse inherent in the material pictorial, in Collins’ bumpy coloured bas-reliefs the wild outcrops of painting are stemmed by a rational approach that allows only calculated and localized margins of action to chance. Unlike the experiments of the French master of the Informal Painting, with whom he seems to share the intuition that “every material has its own language”, the works of the British artist, while communicating a similar impression of immediacy, are the result of a careful (but not rigid) planning that takes place in waiting and observing the behaviour of the matter, in relation to which he shows a total willingness to renegotiate balances, relationships, intentions and events.

Contrary to what one might think following a superficial observation, Collins is not interested in exploding a primordial expressiveness, but in transposing the vitality of an expanded pictorial body that goes beyond the confines of a single canvas to seek a temporary identity structure in the recognition of the empathic and structural relationships that exist between the works from the same series, on which the artist works at the same time, focusing on each of them in rotation. This interconnection is both strengthened and questioned by the drawing, conceived as an orientation grid that allows the observer’s gaze to detect some of the infinite presences implicit in the density of the chromatic substance. If on the one hand the cage of signs excavated by the artist might suggest a pictorial translation of the “sculpture by removing”, here it is not a matter of freeing the purity of an idea from the “excess”, but of recognizing the pre-existence of all the images in the materiality of colour and to make a choice capable of approximating the impossible reconciliation between arbitrariness and necessity. It is no coincidence that the intense black colour that unites the works on display recalls the muddy soil of the undergrowth, shady land of gestation of natural organisms capable of mutually conditioning each other even at a distance according to mechanisms still unknown to us, whose logics could be assimilated to the dynamics of the pictorial ecosystem developed by Collins.

To underline the oxymoronic coexistence between the aspiration to the structure and the awareness of its transience, the artist entitles all his works Liquid Engineers and identifies them by serial numbers that suggest a chronological scan, but also the propagations of an always active matrix that replicates itself by splitting. For this reason, each painting is a container of magmatic matter which, despite being in constant telepathic connection with its peers, constitutes a completely self-sufficient universe in its own right. The fertile pictorial humus deposited on the canvas surprises for the variety of reflections and tonal interactions that diversify the vision into an infinite range of iridescent apparitions: from the darkest ravines arise unpredictable metallic flashes that destabilize the scanning of depth, milky iridescences stagnate for a moment on the surface before being perceptually reabsorbed by the colour that surrounds their outcrop. Flashes of pure colour run along the surface crests of the aggregates of matter as if they wanted to plunge into the space in front.

This already explosive mixture is further galvanized by the explication of the ducts that innervate the thickness of the paste from the inside through the incisions that the artist makes in the still soft surface layer with the aim of discovering some of the chromatic arteries that pulsate underneath the skin of the painting. Each work therefore incorporates an archaic story of concealment and revelation, which for Collins seems to coincide with a sort of mythology of painting declined as an infinite process of integration between doing and looking. 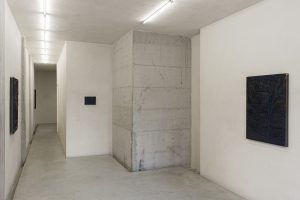 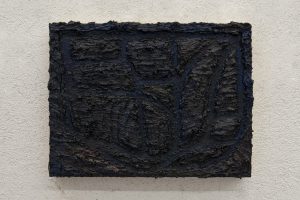 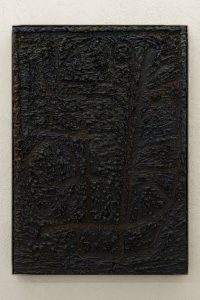