Jenny Saville. The charm of th..

The Edge of Voices. Plural per..

Three years after his last solo show, Joseph Montgomery (1979, Northampton, MA, USA. Lives and works in New York) returns to Bologna at CAR DRDE gallery to present the latest results of his research, focused on the exploration of the imaginative and conceptual possibilities of the pictorial process through rigorous assemblages of primary syntactic elements characterized by an ambiguous complementarity between the serial principle of the archetype and the unrepeatability of the unique piece. If from an emotional point of view his work appears to be oriented towards an emphasis on the sensuality inherent in the materials, which finds its raison d’etre in the need for an emotional reactivation of memory and of the archive by putting in place an opposition (which we could define almost romantic) to the saturation of images that distinguishes our digital age, from a design point of view the artist is not afraid to confront the predetermination of the algorithms that constitute its foundation, transforming its implicit coercion into an inexhaustible source of inspiration. The title of the Human Stain exhibition, suggests the coexistence of these two aspects of his poetics by intersecting an explicit reference to the artisan process of dyeing and, more specifically, to the preparatory phase of traditional painting in which the mordant is applied to the support on which the colors will then be spread, and an idea of ​​manual intervention as an unpredictable interruption of the predefined logic of the software.

Regarding this intuition, an interesting parallelism could be identified between Joseph Montgomery’s approach to artistic making and the atomistic theory of clinamen, a metaphysical conception developed by the Greek philosophers Leucippus and Democritus, later taken up by the Latin poet Lucretius in De rerum natura, according to which reality (in our case the artwork) is composed of atoms eternally in motion, which – aggregating and disaggregating according to the random displacement of the indivisible particles from their vertical line of fall – give rise to the different bodies and their becoming in terms of birth and death. The analogy appears particularly compelling in the works from the Shim painting series, made of sculptural supports formed by the assembly of wooden strips, on which the artist subsequently spreads different color patinas. Here too the English term shim is ambivalent because it refers both to the wooden wedges used as spacers to remedy a difference in height or to temporarily fill a hole and (above all) to the codes that in digital programming intercept the protocols with which the application software are created and integrated and that allow to modify their parameters, manage or redirect their operations or run programs on software platforms other than those for which were developed. The rhythm of the modular sequences of the strips assembled by Joseph Montgomery is generated by a program freely accessible on his website (shimindex.com), through which anyone can obtain the graphic representation of a shim by setting the criteria starting from a certain number of cataloged elements. In this case the atomistic “inclination” that gives life to the work is the arbitrary human choice of the composition to which is added the irregularity of the pictorial skin, in a refined dialectic of random coincidences and discrepancies between the wood grain and the traces of the brush bristles. The final result always manages to be surprising without derogating from the predictability of the process, as it happens in Image Six Hundred Three (2021), where a canvas of the same intense blue that covers the wood encloses the three-dimensional composition like a frame, preventing the shadows from expanding and triggering an ironic conceptual inversion with respect to the function of the most traditional of pictorial supports and of the complement that normally delimits it.

In other works, such as Image Six Hundred Twenty Three (2019-2021) the shim becomes the pictorial representation of a metaphysical solid suspended in the impalpable stickiness of a very thin chromatic film, but rough and capable of concealing a further pictorial universe inaccessible to the eye that transpires only at times from its gaps. In Image Six Hundred Twenty Two (2021), on the other hand, the module is the subject of an abstract representation that translates its volumes into linear watercolor patterns, hinting at its existence through an open profile, always in relation to a matrix background where a painting made of overlaps, abrasions and transparencies “happens”. For homogeneity of chromatic thicknesses and intentions, I would compare this last work, although the approach to the image seems radically different at first sight, to Image Six Hundred Twenty Nine (2021) or Image Five Hundred Ninety Nine (2020), emblematic pieces of the more recent production of the artist who rework with pictorial tools pre-existing images taken from his personal archive, such as photos of his studio, exhibitions or works previously created. The reference to the daily and private dimension, activated by the explicit insertion of images where recognizable details of real environments appear, actually originates in the same desire to stratify and overlap which constitutes the deepest raison d’etre of the previous works, meaning such sedimentation as the physical, material and conceptual thickness that constitutes the habitat and essence of painting. In this way, even the photographic image printed on tracing paper is used, like the transferable colored diaphragms of the abstract works, as a pictorial layer to be engraved, scraped, dirty and cut out that interprets the canonical procedure of painting by glazing with a multimedia approach. The declared instability and fragility of the layers is counterbalanced by the extreme precision with which Joseph Montgomery calibrates their reciprocal relations (also understood in a three-dimensional sense) allowing him to create suggestive intersections between different systems of signs and references that find new ways of coexistence in the name of painting. 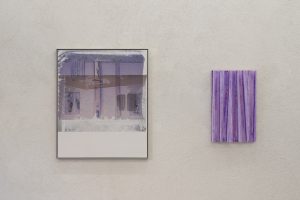 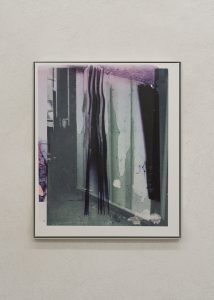 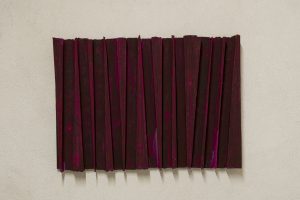 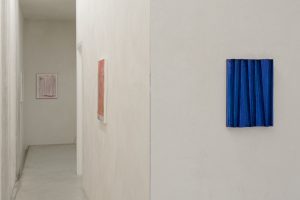