The hybrid universe of Patrici..

For the first time the MAMAC – Museum of Modern and Contemporary Art in Nice dedicates a major exhibition to Daniel Spoerri, initiator of Eat Art, near Fluxus, member of Nouveau Réalisme, on which the museum offers a special focus through its permanent collection and an original dialogue between American Pop Art and the New European Realism. The Spoerri exhibition, curated by Rébecca François, also relates perfectly to the local artistic history: between the 50s and 70s Nice and the French Riviera were the site of important experiments and inventions of new artistic gestures, thanks to the contribution of leading exponents such as Yves Klein, Martial Raysse, Arman, Ben, Nicky de Saint Phalle and groups such as Support/Surface. And two of the key concepts of those years and those movements belong to Spoerri: the act of appropriating everyday life and an art made up of gestures and behaviors.

The exhibition opens with a conspicuous ensemble of historical works, whose succession tells the surreal process of petrifying reality put in place by the artist by overturning assemblies of various objects. But it was the trap-pictures that brought Spoerri fully into the Nouveau Réalisme in 1960. The first works entitled “Carnival of the fleas” capture the vertical exposure of abandoned objects, revealing their poetic beauty. Spoerri began to collect iron scraps through his friend Jean Tinguely in Paris and shortly after he came up with the idea of ​​petrifying situations of objects on a vertical support with glue, fixing forever the moment determined by chance. Collecting objects is something that every child does, we are all collectors in a certain sense and the continuous search for new treasures for our collections can be read as an attempt to understand the world or to own it.

The artist has been collecting objects from flea markets for years, following his intuition and not a scientific logic. He assembles them, so that they contaminate each other and then gives them an explanation. And the spectator can do the same. The object is no longer represented but presented to the viewer of the work so that he can touch the personal or collective memory.

A special corner within the first section of the exhibition is dedicated to word games that literally represent popular expressions and international idioms. As an Italian visiting a French exhibition, the fact of writing about it in English brought me very close to Spoerri’s curiosity for words and languages. The Swedish expression “having eggs in a hat” is represented, for example, by a sculpture and the artist’s iconic photographic portrait with eggs on his head inside a transparent glass hat. The expression refers to the bad habit of those who do not take off their hats when it would be polite to do so and for this reason they could be accused of having stolen something that they hide on their heads.

Spoerri’s love for cooking, exchange and conviviality is inscribed in his trap-pictures and emerges in the history of the meals, restaurants and events he gave life to: these aspects are documented in the second macro area of ​​the exhibition. The setting proposes a journey inside the Galerie J in Paris, in which the “chef Daniel” had created his first ephemeral restaurant in 1963: on that occasion the exhibition space had become a real restaurant, in which art critics – waiters served the most unusual dishes to customers – spectators. The tables after meals and the leftovers from the dishes became trap – paintings that fixed those moments forever by hanging them vertically on the walls of the gallery. The relationships between artist, critic, galleries and public were thus distorted.

Over the years, the artist has continued to organize banquets that have generated culinary and socio-cultural experiences, serving foods capable of arousing extreme reactions, from delight to disgust. By converting the gallery into an atelier, the atelier into a restaurant, the leftovers of the restaurant into art, Spoerri shows us things from a reversed perspective. Everything originates from the table as the starting point of an investigation into the world and our existence: as in front of the trap – paintings we ask ourselves how and why the artist created them, when we eat we want to know where does the food we have on our plate come from, we ask ourselves questions whose answers are intertwined with the history of peoples, countries and humanity.

Spoerri’s interest in collections and medicine as art, moving between traps and illusions, is perfectly represented in the third area of ​​the exhibition where, among other works, “The Breton Pharmacy” and the “Operative Medicine” series (started in 1993) are exhibited. In one of his greatest feats as a collector, the artist traveled through Brittany in search of all the sources of water to which a curative power was attributed, which he cataloged in the 117 bottles that make up the “Breton pharmacy” and in a book printed in limited copies that could only be acquired by exchanging it with another book. In “Operative Medicine”, starting from lithographs with medical illustrations from the 19th century, Spoerri had created works by assembling scientific images of the human body with objects that are sharp and poetic from time to time, such as scissors, pins, knives, artificial flowers, shells, and toys, which reveal human nature in all its precariousness and preciousness. 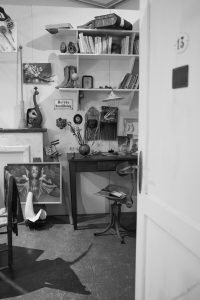 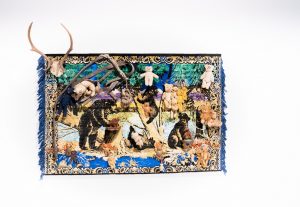 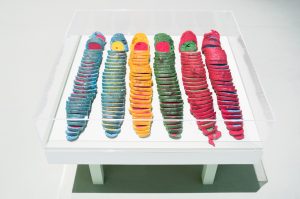 Dorothée Selz & Antoni Miralda, Pain colorés, 1971-2021 (series of real breads with food coloring made in 2021, identical to the colored breads exhibited in windows at the State Art Galerie in June 1971 and also made for the colorful meal on June 4 1971 at Restaurant Spoerri. Courtesy: the artists and MAMAC Nice, ph Marco Capomolla

After my master’s degree in art history in Genoa, I set out to explore the world following the cultures that most inspired me, from Canada to Hawaii. I continued my online studies specializing in digital marketing, today I work as a digital strategist for galleries, museums and professionals in the world of contemporary art. My heart goes to digital art & NFT but I also hang out among the exhibitions on the Côte d’Azur for geolocation.