The hybrid universe of Patricia Piccinini

The hybrid universe of Patricia Piccinini

Identity, hybridity and empathy are the prerequisites of the artistic research of the Australian Patricia Piccinini (Sierra Leone, born in 1965). Trained at the Victoria College of the Arts in Melbourne as a painter, Piccinini began her artistic career in the early nineties with anatomical drawings and paintings. Today she is known internationally for her unconventional aesthetics and hyper-realistic sculptures.

Over the decades the artist has developed a vocabulary of anthropomorphic figures with mythological and, at the same time, post-modern features. Initially born in the form of preparatory drawings, the sculptures are then produced in digital printing. Thanks to the help of expert collaborators, such as animators and chemists, Piccinini’s chimeras are covered with a layer of skin similar to human skin, of which the artist scrupulously reproduces every imperfection, fleshy bumps, wrinkles, freckles and moles. The realistic yield is also emphasized by the use of human hair, fiberglass and silicone. The result is a grotesque, deformed and almost monstrous body capable of repelling and, at the same time, attracting the viewer. Through this personal universe of surreal sculptures, Piccinini explores the increasingly nebulous boundaries that separate the artificial from the natural, man from the animal and reality from utopia. Without posing any didactic or moralistic prerogative, the artist recounts the development of science and its impact in contemporary society. In fact, as Piccinini herself explains: «In the past it was religion or myth, but now it is science that explains how the world works and also becomes the expression of how we want the world to be, or we fear that it may end».

Piccinini’s work is dominated by a constant interest in the structures that regulate the perceptions that man has of himself and of the other living beings with which he co-lives, above all, with those whom he has manipulated in his unbridled race towards technological progress. How far can science go? Advances in medical research are rapidly abolishing the limits of what is possible to produce and replace in the human body, invading the natural with the artificial.

These reflections find their expression in Still Life with Stem Cells (2002). The work is part of the series We are Family, presented for the first time on the occasion of the 50th International Art Exhibition: “Dreams and Conflicts” at the Australian pavilion. Piccinini shows a life-size cloned little girl playing with lumps of flesh with indefinite shapes. These small organisms, covered with skin and pulsating veins, are actually, as the title specifies, stem cells, a form of cellular matter that can multiply and differentiate into different tissues in the body. Due to their peculiarity, these can become anything man desires, their potential is infinite. The impartiality of the work about a judgment of sciences is underlined by the little girl figure who, sitting on the floor, appears serene and amused. Piccinini’s creatures are often in the company of children as, according to the artist, unlike adults, their minds have not yet been contaminated by social prejudices towards the Other and diversity. In The Long Awaited (2008), for example, an elderly hybrid creature, reminiscent of a mermaid, is asleep on a bench with its head resting on the lap of a child, who embraces it without any fear.

As a modern Mary W. Shelley, Piccinini reflects on the ethical implications and responsibilities caused by man’s exploitation of other living things for his own needs: is it fair to use animals for our own advantage? What are the responsibilities and the behavior that man must assume towards them? From all these questions comes The Young Family (2003). The installation consists of another life-size sculpture of a hybrid creature, half human and half pig, lying on the ground in the act of feeding its puppies. The folds of the skin and the wrinkles on the forehead indicate that this is not a young mother, whose expression expresses worry and fatigue. The animal face is contrasted with human characters, both physical and emotional, that evoke in the observer a feeling that oscillates between repulsion and a desire for affection and protection. With this work Piccinini tells the consequences of the replacement of heart valves with biological ones, made of natural materials, such as the pig’s heart. A similar surgical process has led to the development of specialized pig farms whose sole purpose is to provide organs for humans.

What drives man to invade the natural kingdom, to reduce it to a mere resource for his own needs? Perhaps the belief that the human species is unique and separate from others? According to Piccinini, it is precisely this security to lead man to damage natural habitatsand the organisms that live in there. However, the boundary between man and animal is not as marked as it seems. Genetic studies have shown how similar human DNA actually is to that of many animal species. Some similarities can be found on the behavioral level, in attitudes and habits, in particular with primates. In Big Mother (2005) Piccinini emphasizes the kinship between man and animal by telling the maternal drama of a humanoid baboon. The creature nurses a baby wrapped in a blue blanket. At her feet there are two bags containing diapers. The work is inspired by a news event placed in Sierra Leone and it is about a female baboon whose puppy died while she was breastfeeding it. Shocked by the pain, the mother kidnapped the newborn of a passerby. Baboons, in fact, when they lose one of their cubs, they carry it with them until the body decomposes in their arms. The creature shows the humanity of suffering and, at the same time, reminds that we are anything but animals with primary instincts.

The similarities in relationships are even more evident in Kindred (2018) and inSanctuary (2018). In the latter, Piccinini shows the conjugal affection of two elderly creatures who hold each other tight in an intimate and sexual embrace. The installation is inspired by the bonobo, a kind of monkey very similar to the chimpanzee, from which it stands out for the low propension of violence and for the accentuated sexual activity. The bonobo is the only animal species that, other than the human being, engages in kissing with the tongue. The destruction of their natural habitat and the increase in poaching are rapidly reducing the species to a few specimens, recognized as endangered. With this installation, Piccinini not only denounces an environmental condition, but destabilases the common and stereotypical imaginary that love belongs only to the young human being.

In a historical moment in which scientific research has never been so under pressure for the production of suitable drugs for dealing with a global pandemic, Piccinini’s practice is extremely current. What ethical implications have troubled with vaccine development?  How much does our desire for survival lead us to damage other living creatures? 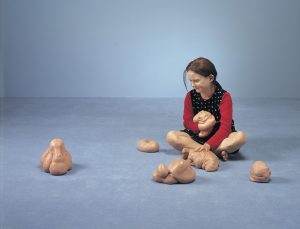 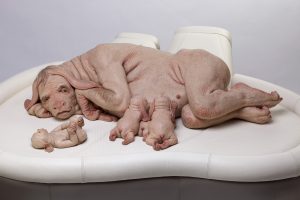 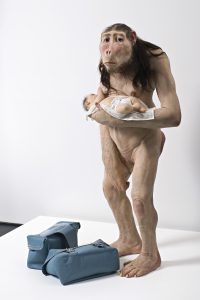 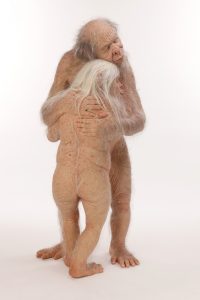