Following the success of the Lithuanian Pavilion for the Venice Biennale, 2019, the curator Caterina Avataneo welcomes us at Arcade to talk about the first solo show in the UK of the Spanish artist, Leonor Serrano Rivas, born in 1986, and whose artistic practice masterfully assembles installation, sculpture, performance, and video. From a background in architecture followed by postgraduate studies at Goldsmith and the Slade School of Fine Arts, UCL, London, and numerous recognitions including Arco Madrid Young Art Award, this year, her debut is marked by two almost contemporaneous solo shows held at C3A, Cordova, and Matadero, Madrid, Spain. At Arcade, London, Leonor Serrano Rivas presents the show Above the Eye Level and stages the five acts of a poetics of dreams to configure an imaginative landscape, at times exotic.

In reality, here, the artist has already been noticed for the collective exhibition The Dream Follows The Mouth, 2019, wherein the simulacrum of her metal and blown glass sculpture, The Dream of the Mouth (10 ), 2018, certainly could not have remained unnoticed if we recall its capacity of projecting an imaginative and aesthetic experience. Today, here, the artist presents the outcomes of an artistic residency held in Tangier, Morocco, in July 2019, which well responds to the context of the gallery by carefully calibrating the perception between the inner / outer aspects of her work in relation to the experience of the modern visitor.

What distinguishes the practice of Leonor Serranno Rivas is the mise-en-abyme of the artistic act, or a theatrical form that is aimed at superseding representation with the purpose of shaping an experience of thought, dream, and the figural in a performative manner that is, according to Caterina, ‘the expanded space of the moving image’.

The works featured in the show draw upon an archive of memories and stylistic citations which revisit the modernist thought of the playwriter Gregorio Martinez Sierra, director of the Eslava Theater between 1917 and 1925 in Madrid, that the artist had the opportunity to deepen following a residency in 2018. This citation is combined with a poetic contemporary reference that we read through the verses of the Portuguese author Gonçalo M. Tavares who, in Voyage to India, 2010, reflects upon the idea of journey as a path towards the abyss.

Thus, the exhibition is an invitation to overcome these limits by abandoning visual and sensorial perceptions in order to rediscover ourselves as actors immersed within a landscape of dreams that the artist meticulously delineates through the play of projection, sign, and the ornament. In this sense, Leonor Serrano Rivas proposes an encounter with the possible dimensions of dreams through her repeated use of the figure of the semicircle that often outlines the geometries of her works and that seems here to embrace the gallery, balancing a play of unconcealments and revelations to gently conduct the viewer deeply into the abyss.

The installations Twofold Sea (2 and 4), not a mirror in the eye but a mirror in the mind, 2019, conceived during the residency and composed of fabric materials, are assembled according to a scenographic trick which stimulates a new way of thinking about figures and the surroundings, at times revealing the illusionistic scene of her phantasmagorias.

The dispositive that puts this transformation into action is the installation Magic Mirror installation, 2019, composed of steel, aluminum, metal, and reflective surfaces, for which the artist revisits a project that has never been realized before if not on paper, the drawing Endless Theater Project, 1924 , by the architect, scenographer, and artist Frederick Kiesler, known to the most for his surrealist investigation.

Whilst the participatory dimension of this work echoes Dan Graham’s artistic solutions, more precisely Magic Mirror aims at articulating a dimension of estrangement that makes an experience self-reflection into an opportunity for the figural. In so doing, the installation gives back a distorted, altered, and opaque image of the self to move into the inner landscape of dreams and leave behind the forms of appearances. The sculptural  armour, the curve, the carving, the silhouette, the play of mirrors, and the surface of her installation correspond to a very precise style that makes theatricality a way of rethinking representation as a form of enactment which surfs across thoughts, dreams, figures, and images.

At the end, from this curved, plastic and opaque surface, the artist reveals the last two works on display. If, on the one hand, with the glass and steel mock up of the Endless Theater Project, 2019, the artist becomes the spokesman of a still vivid and present dream, with the print, Untitled (study for Twofold Sea), 2019, here exceptionally exhibited for Arcade, the artist offers us no longer an objective view, but the vision of a dream wherein totemic figures are in dialogue as if suspended in the flow of reveries.

Before leaving, we retrace the poetics in five acts of Leonor Serrano Rivas for Beyond the Eye Level, whereby the artist invites us to rethink the figure, the landscape, the space, the thought, and the forms of a contemporary artistic language, as we look forward for other projects to come. 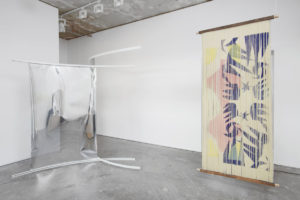 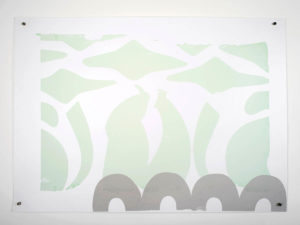 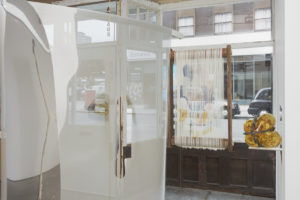 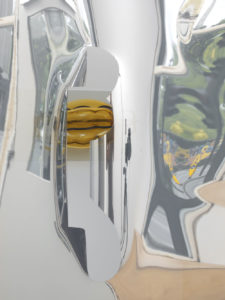