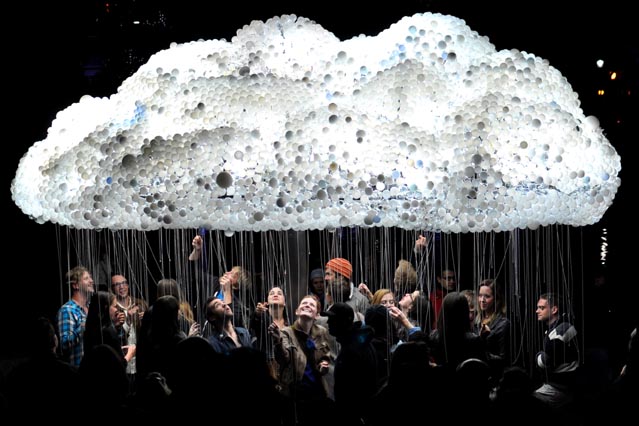 The Canadian artistic duo, composed by Caitlind r.c. Brown & Wayne Garrett, is internationally recognized for their site-specific interventions, aimed to redefine environmental or urban contexts through collective actions. Their practice emerges as an assembling strategy, catalyst of experiences, drawn from the encountering of social contexts and landscape.

The works by Caitlind r.c. Brown & Wayne Garrett infiltrate the context, be it landscape, urban, architectural or archival, by employing a framework that, with references to situationist and psychogeographic practices, articulates the different constitutive components of their work in their becoming. Their research focuses on the agential and transformative power of the dispositives that regulate the artistic experience beyond subjectivity, in order to stage the events and relationships interwoven by artistic practices in their becoming. In their words: ‘Site-specificity is at the heart of our conceptual process. We try to approach each site from a broad and holistic perspective, aiming to consider as many factors as possible. This is part of our interest in working in pre-existing public spaces; the opportunity to create work that can be in conversation with its surroundings and contexts. One element which is perhaps unconventional about our approach is considering the viewers and the public as part of the environment’.

The site-specific practice by Cailtin r.c. Brown & Wayne Garrett, proposes a micro-politics of sights, such as for the project Wreck City: An Epilogue for 809, 2013, which saw 150 artists collaborating for the transformation of an urban district – the original site of the first garage-gallery in Calgary, Canada –  by assembling an installation complex in which private and public buildings have been redesigned according to the contexts of experience. In 2015, the site-specific intervention As Above, So Below, was conceived in response to the original architecture of the Barron Building – built between 1949 and 1951 as one of the first example of Modern style in Canada – by pursuing a deconstructive strategy that, opposed to abstract models of representation, introduced a transversal approach, aimed to entangle materials, memories and experiences of the place.

Other works focus on sustainable strategies, developed through new ecological and cosmological approaches, and focused on exploring the phenomenological and psychological possibilities of  experience. The installation Bellwether, 2014, commissioned by the Lexington Art League, well describes the artists’ interest in investigating the limits between materials and non-materials through a number of sensory-devices that, in response to the spectator’s presence, project traces of light and sound.

The attention to climate phenomena is evident in other large-format interactive installations. While in New Moon, 2014, the artists evoke an analogy between terrestrial and celestial bodies, asking the viewer to manipulate the lunar phases, in Solar Flare, 2014-2015, originally designed for the pedestrian Stephen Avenue in Calgary, the artists focus on articulating an experience of light, drawn from sensory-motor schemes that, in response to the movement of the passer-by, project rays of artificial light which prolonged the intensity of light during the golden hour. In sea / see / saw, 2015-2016, a permanent installation conceived for the facade of the Pera Museum in Istanbul, Cailtin r.c. Brown & Wayne Garrett pursue an artistic investigation for the sensorial aspects of vision by rethinking the reflecting surface of the Golden Horn’s waterway, through the mechanisms that underlie the movements of water and wind.

The limit of sensory experience become in the artistic practice of Cailtin r.c. Brown & Wayne Garrett, a new perspective for the modes of apprehension, in particular in those works that explore the limits in between light and darkness. The site-specific installation Deep Dark, 2015, conceived following a series of residences at the Banff Center, addresses an enquiry upon the construction of a new discursivity for ​​the idea of ​​darkness. By inviting the viewer to a nocturnal experience in which to walk along a path illuminated only by artificial light devices (doors, frame), the artists suggest an experience of darkness that, away from logical conventions, recuperates a mythical affectivity, suggested by the surrounding landscape. Analogously, the work Night Blind, 2015, conceived during a residence at the Klondike Institute of Arts and Culture in Dowson City, explores sensorial experiences in between light and darkness, built environment and landscape.

In the contemporary context, the artistic practice of Cailtind r.c. Brown & Wayne Garrett emerges at the intersections of artistic practices such as site-specific, public art and environmental art, by placing the mechanisms of sensation at the core of artistic investigations. Through practices of assemblage, the artistic work of the Canadian duo, interrogates the conventions that underlie formalist interpretations of reality, to unveil new thresholds of experience. 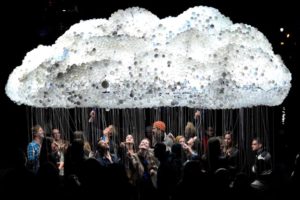 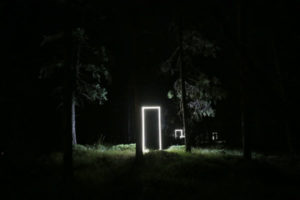 The Deep Dark by Caitlind r.c. Brown & Wayne Garrett in the forest surrounding The Banff Centre (2015). Photo courtesy of the artists 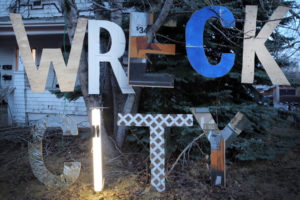 WRECK CITY sign by Caitlind r.c. Brown & Wayne Garrett at WRECK CITY: an Epilogue for 809 in Calgary (2013). Photo courtesy of the artists 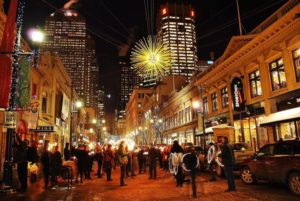