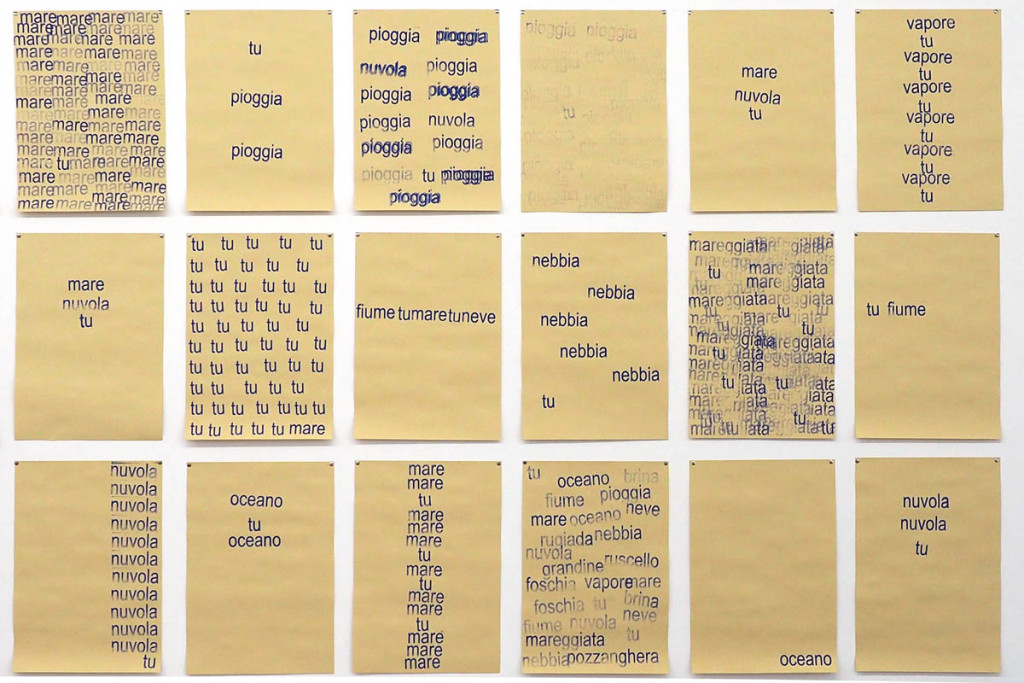 Entering the little big world of David Horvitz is a matter of few steps: once you have climbed down the metal ladder that leads to the Loom Gallery, you will find yourself comfortably detached from the reality of the city, and here, beneath the surface of Milan, imagery of asphalt gives way to imagery of water, physically absorbed in the earth but mentally floating among the crests. The protagonist of the exhibition is in fact the sea, perceived as an ancestral means (and place) of communication used by the various communities with which it has come into contact since ancient times; a common ground for an ideal dialogue between Odysseus and Padron ‘Ntoni, between those who are forced to leave and those who are forced to stay.  The starting point of the journey is a photograph of a spoon reflecting the moon, the satellite which in fact controls the tides. A small and discreet work that would go almost unnoticed, but which actually provides a gateway to interpreting the exhibition: the connection between high and low, man and nature, the mirroring of every detail in its entirety and vice versa. There is though no panic sense, but, on the contrary, the quiet joy of being lulled into concordia naturae, a lyrical, natural and intentionally spontaneous arrangement.

The second work in the exhibition is also based on the idea of an arrangement, a contract signed by the artist and the buyer who agree not to reveal before ten years have passed which is the actual work of art: here lies the pleasure of not knowing, of surrendering to the unfathomable, supported by the legitimate anxiety of awaiting discovery.  Several streams,  reminiscent of a river delta, converge in Horvitz’s third work: the human stream which witnesses the migration of an American artist to the Sicilian town of Favignana between October and November 2017; the capital “F” stream, the Fluxus which is surely a starting point for his research; the linguistic stream, in which Italian nouns defining a specific form of water were taken out of context by an English-speaker and printed on paper using rubber stamps (also on display) to create poetry; the information stream, created by the numerous postcards containing the poems sent to every citizen of the island (addresses were taken from the local telephone directory), or obtained through word of mouth from the islanders themselves, certainly surprised to have received the letters sent to them of this kind.

An entire wall is covered with the ochre coloured cards on which these words were printed in blue: some stand out strong and sharp, others flutter fading on the paper. The pronoun “you” is never left out, thus proving the spirit of unity between man and the cosmos: in fact it is a matter of common knowledge that human beings are made up mostly of the liquid which makes life possible. “Rain” or “dew” are almost invisible; forms discreetly taken by water which later silently evaporates. On the page studded with multiple “coastal storms” the “you”s clearly stand out, romantically enveloped by the colour blue which vanishes stamp after stamp, like the figures of Kaspar David Friedrich on the seashore. The watering down of the colour, word after word, seems to recall our hearing of waves roaring back and forth, slowly fading and then returning.
The waves themselves have given back to man what man had wrongfully discharged on them: fragments of bottles the artist assembled to create a vial which seems to contain the sound of the sea as if it were a shell. On the green container with uncertain and jagged edges, the light flows delicately as does a stream on the pebbles of its bed. Located nearby are the artworks on which the various noises and sounds of the sea are represented: letters printed either in blue or black, almost recalling the different depths of the abyss or the faint surface flows. They stand out on backgrounds dyed to resemble the foam of the waves, or with bright sedimentations of crystal clear pigments, where the artist used more somber and unsettling brushstrokes.

The entire exhibition plays with various colours which make up the marine environment, from the sand-coloured stamps dipped in blue ink, the sheets of the same colour, to the last artworks with various floating green or white filaments which bring to mind algae formations and jellyfish tentacles.  In the works of David Horvitz there almost seems to be a balance and osmosis between the prosaic lyricism of the Zen koans and the stacking and retrieval of Web 2.0 data: in both lies the transition from small to large, detail to entirety, the local to the universal; a shaded, almost invisible transition but very present and essential. Procurement of the system through the growth of the individual and vice versa. 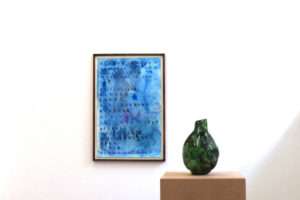 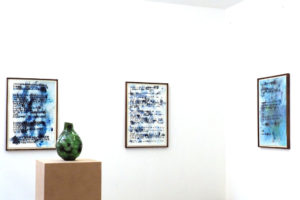 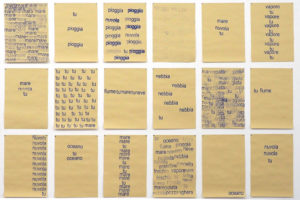 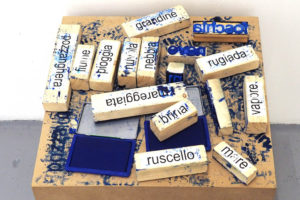