Hearing and listening are two words that form an ambiguous binomial that spreads through the exhibition space. There is no clear and recognisable sound, in the concreteness everything seems to be mute: white noise of objects that as a medium propagate a message. It is from this relational act that the artist’s intent arises, differentiating hearing from listening.

For his first Italian exhibition, Marlon Kroll – a 30-year-old artist from Montreal – chooses the Parthenopean city as a workbench for his art, allowing himself to be absorbed by the sounds of the mille culure city. Marlon’s art is the result of perceptions and receptions external to his being, incorporated through the senses, modified with a personal filter and propagated into works. “Hear” an inner stimulus produces tangible effects in his creative act – made up of objects and things borrowed from the colourful Naples – which acts as a sounding board for anyone who is attracted to them to “listen”. These works speak of experiences and personalities that say something about the body and personification. The artist’s drawings and sculptures are abstractions that emulate a life process, emitting sounds that indicate that there is a life and that there was an echo of its trace. Receiver is the exhibition of those who “receive”, of those who have ears to hear.

Inside the gallery in the Chiaia district of Naples, the works exhibited occupy the interior space despite their minimal size. Marlon Kroll takes as his starting point a wall sculpture called Speaker, a section of an acoustic trumpet as a metaphor for an open speaking mouth.

The paintings, made with colored pencils and acrylic, are placed on the walls in places which are not visible at first glance. In their abstraction, they represent the anatomical interior of the throat, with its vocal cords that vibrate silently and in their spatial placement act as ideal loudspeakers to external stimuli.

The fictitious sound waves thus produced are personified in the surrounding sculptures: like a choir they repeat and sharpen a message. They are chairs made of wood and wicker perforated in the middle by a tympanum and arranged in space like human beings intent on experiencing everyday life. On them lies an egg, a germ of life, fragile and delicate, poised on those vibrations that life itself generates.

All these frequencies, these vibrations of highs and lows, write messages of coded words waiting to be translated into sound. The artworks on show as a whole constitute an amplifier of feelings, emotions, concreteness and existence. They are essential to ‘speak’, to give voice where it is lacking, to recount the experience that has been and that is to come.

The artist Kroll composes something that starts from his innermost self and has no idea where it arrives: he is the receiver that pours out a message waiting for someone to hear and listen. 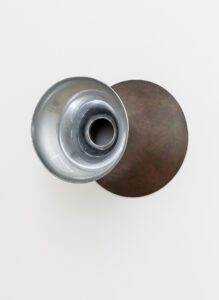